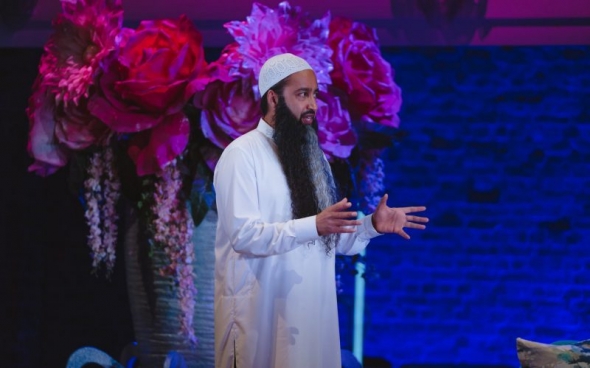 A classic gets the British Asian twist and mostly, it works…

YOU MIGHT think mocking a Muslim cleric in these politically sensitive times is a dangerous feat for the Royal Shakespeare Company (RSC).

There can be little doubt that the traditional Roman Catholic Church was the target for Molière, the French playwright, who penned the original version of ‘Tartuffe‘ in the 17th century.

Indeed, the Church sought to ban it at that time but it has gone on to become one of Molière’s most loved and commonly performed plays, especially in Europe.

It is very funny and sends up a common trope – the charlatan who comes bearing false gifts and pretensions and is then uncovered.  It’s not a plot spoiler, don’t worry.

Now, the RSC have made an Asian version and put a Muslim family at the centre of the action – if you read our interview before it opened, you will know that it has been adapted from the original by writer Richard Pinto and producer Anil Gupta, who were also creatives behind ‘Goodness Gracious Me’ and other hit TV shows.

The RSC play returns to Stratford-Upon-Avon after a short break and continues to February (2019).

Set in the Midlands, the RSC have done a grand job of transplanting the original to more contemporary times.

The cleric in question is played by Asif Khan, who is one of the best and most versatile stage actors you can see today.

For my money, he actually underplays Tartuffe, in this version – ‘Tahir Taufiq Arsuf’, a tad.  Taufiq plays up his Arabic credentials to present himself as a man of deep faith.

It’s very easy with a character like this to go over the top and maybe in the run up to xmas, he might go a little more panto villain, but Khan is actually relatively restrained, until the ‘bedroom’ scene with ‘Amira Pervaiz’ (Sasha Behar), when he reveals his leopard skin print underpants.

The story in itself is relatively straightforward – the Pervaizes are a typical sort of Asian family, loving, tight-knit but not without their points of tension.

Patriarch Imran (Simon Nagra) is a decent fellow and the family are perhaps still in a state of mourning after his wife’s death, but new partner Amira has fitted into the family without too many issues. She is sincere, thoughtful and respected by her step children.

Kids Damee (Raj Bajaj) and Mariam (Zainab Hasan) are charting their own courses and are likeable.

Dadimaa (grandma), played with gusto and verve, by Amina Zia, is a hoot. Set in her ways, she’s got something to say to everyone – and might deserve her own show…

Also family of sorts is their Muslim Bosnian cleaner ‘Darina’ (Michelle Bonnard) who also acts as the faithful narrator and has a nice line in humour.

Imran might be a shade vulnerable and it is this that allows our Muslim cleric to wheedle his way into the Pervaizes’ lives.

His faux authority and knowledge soon make him a powerful figure in his own right in the Pervaiz household and he clashes with Damee and sets himself as the best placed suitor to Mariam’s hand in marriage.

There is turmoil and strife where once there was just banter and affection; Tartuffe is moving inexorably to cashing in (both literally and metaphorically).

We shan’t go any further – that might spoil the fun!

Molière was almost certainly making the case for people not to be taken in by religion, or perhaps more specifically, clergy who claim to be an oracle and font of wisdom, simply because of their robes and pious disposition (which may not be sincere).

Most developed and modern societies have their safeguards – but it is good to remember that individuals can still be seduced (for bad ends), especially if they are vulnerable.

This is a fun play with lots of decent gags and comic set-ups; perhaps one or two scenes and dialogues drag just a little; but Iqbal Khan’s direction and solid supporting performances provide mostly rich and enjoyable entertainment and next time a holy man or woman comes bearing improbable gifts, be wary and check they don’t have leopard skin print underwear!

All pictures: ©RSC and Topher McGrillis

Privacy & Cookies: This site uses cookies. By continuing to use this website, you agree to their use.
To find out more, including how to control cookies, see here: Cookie Policy
← Asian and black journalists call in ‘Time for Change’ for UK media…our support
Gathering support for open letter calling for real change on diversity in the film and TV industry – and organised by Asian women creatives… →