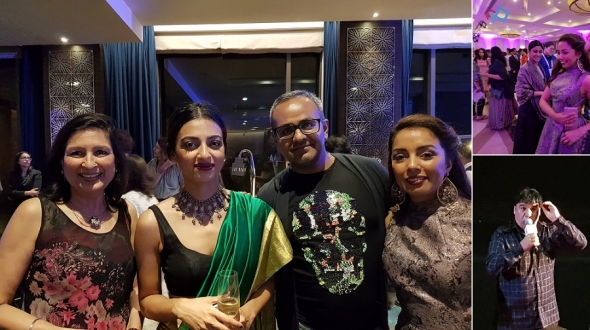 Bollywood and Indian indie cinema come together to celebrate….

MUMBAI. India’s city of dreams and home to the world’s biggest film industry.

You might imagine its film festival is a Bollywood star fest, offering rich pickings to its contingent paparazzi and a chance for fans to see their heroes and heroines in the flesh.

But while the Mumbai Academy of Moving Image (Mami, to give you its abbreviated name), is backed by a plethora of stars and Bollywood heavyweights, the films selected are all at the independent end of cinema. There is a lot of western cinema too, but that isn’t what we would go to see, unless there was a British Asian connection (‘Lies we tell’ enjoyed an India premiere, and is set in Bradford and directed by a British Asian newcomer, Mitu Misra).

www.asianculturevulture.com happened to be in in Mumbai, unplanned – and managed to catch the tail end of the festival, which screened some 200 plus films between October 12-18.

Perhaps the abiding image for acv will be Afghanistan’s top film star, Salim Shaheen (over 100 films, no less) crooning a famous Bollywood track and being feted by a transfixed audience.

There was the industry talk, amiably and skilfully chaired by Mumbai Film Festival director herself, Anupama Chopra. The star critic, who has her own Youtube film channel (Film Companion) and who is married to one of the industry’s most successful directors, Vinod Vidhu Chopra, was in fine form and elicited much from her three upstart producers.

Without repeating the story we published the day after, it was an entertaining and insightful session and we were a little disappointed we didn’t get to the earlier chat between upcoming indie and emerging Bolllywood talent Rajkumar Rao (‘Newton’, ‘Aligarh’) and South Indian icon Dulquer Salmaan ( perhaps best known perhaps outside the South and Kerala for Tamil auteur director’s Mani Ratnam’s ‘OK Kanmani’).

Much of the Shaheen Q&A was in Hindustani (not a tongue of familiarity to Bird No1).

Of the films we saw (see below) the first two really stand out and we hope they make it to the UK and the London Asian Film Festival (LAFF).

Both director and founder Dr Pushpinder Chowdhry who created the festival initially as Tongues of Fire and chief programmer Samir Bhamra were based out of the JW Marriott hotel in Juhu, Mumbai and not only saw a few films but pressed some important Mumbai film personalities. It was home to most of the talent and were some of the more starry Mami events took place, not least the final closing awards ceremony on October 18.

As far as LAFF 2018 goes, all we can say is watch this space (come here for all that news as we are the festival’s official digital media partner). It will be March 15-25 next year and it will mark 20 years the festival is running.

Dr Chowdhry, made an MBE this year, is busy working on what will be a truly knockout and memorable 20th anniversary edition. Expect some special celebs 😉. (Sailesh Ram)

Short reviews from Jio Mami with Star 2017 (its official title recongising the sponsors).

‘The Forsaken’ – Those who loved ‘Sexy Durga’ (called ‘Sexy D’ at Mami) – screened at the London Indian Film Festival in June – and the very singular voice of filmmaker Sanalkumar Sasidharan will find much to admire in this film about a rapist (Sanal Aman) and the society that created him. Some might find the journey from a violent, unloved and traumatic childhood, to rapist too simplistic, but Anthony has a wider point about the way Indians treat each other, governed as they are often by tired conventions and silly hierarchies (first born from a caste system). Unflinching but unfailingly cinematic, Anthony is one to watch – a liberal and compassionate soul who must continue to develop and grow as a filmmaker and say uncomfortable things about a country that appears to have got much harsher and more violent on the face of it in recent years. ACV rating: *** (out of five)

‘Aswathamma’ – Elegant, finely acted (mostly if not completely by non-professionals), Pushpendra Singh’s part Busan Film Festival financed and technically assisted production (the crew was South Korean), is a beautiful ode to another time and place.
The story takes place through the eyes of Ishvaku (Aryan), a little boy who has heart and soul and whom the camera cannot avoid, without good reason. This film’s gentle and mostly unassuming ways will appeal to those who enjoy the work of someone such as the great master that was Satyajit Ray. In fact in many ways, Singh’s love letter to his own family and community has echoes of Ray and like ‘The Forsaken’ finds fault with a convention and tradition that often simply refuses to bend. Beautiful, if a little elliptical at times.
ACV rating: ***½

‘Walking with the Wind’ – the setting of Ladakh (if memory is correct) unsurprisingly offers many opportunities for a close up of the harsh landscape and the struggles of local folks to survive. Amidst this, 10-year-old Tsering (Sonam Wangyal) must fix a broken chair. His family have little money and his father’s income as a tourist guide is falling. Interspersed with the story of a Japanese filmmaker keen to make a film in, and of, the region, you never quite know where the film is going and that’s a good thing.
Praveen Morchhale, as a director in his second film, brings a delicate and compassionate lens to a community’s material woes and puts it against the background of a young boy trying to do the right thing but facing too many worldly obstacles. The big city beckons but is life any better there than in the wilds of the foothills of the Himalayas?

‘One Thousand Ropes’ – it isn’t often we see anything about Maori culture come to an international stage (other than the All Blacks rugby and their Hakka), so there is something powerful and intriguing about Samoan-born but now New Zealand based Tusi Tamasese’s work. Centred around Maea – a hulk of a man who is as macho as they come – and who has switched from the glory days as a fighter to a traditional healer helping pregnant women with special massage, there is the unmistakable stench of masochism, domestic violence, and competitive masculinity. The film is almost all in Maori or Te Reo, and adds another layer of authenticity to this tale. Dark, absorbing and imaginative, it is a real window into another minority culture that is wrestling with its own contradictions, and issues.

‘Lies We Tell’ – Made by Brit Mitu Misra and based around Bradford (from where Misra and screenwriter Ewen Glass and Andy McDermott hail), this will be released in the UK in 2018 and was the subject of a glitzy premiere in London last month which www.asianculturevulture.com covered live.
It slightly non-plussed the Indian audience – who couldn’t muster a single substantial question. Features Harvey Keitel and it’s a shame the Q&A session wasn’t able to open up leading cinematographer Santosh Sivan into what induced him to work in Bradford with a first-time filmmaker. It’s stylishly shot, has high production values, has a starry cast with Gabriel Byrne in the male lead part and Gina McKee making a cameo too.