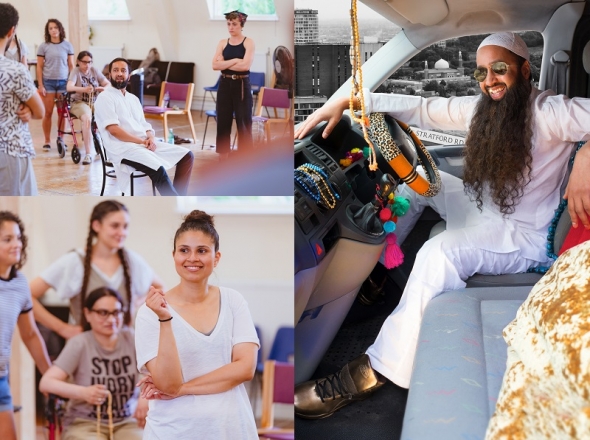 ‘TARTUFFE’ is a classic French play by Moliere and gets a unique South Asian makeover.

Conceived by the Royal Shakespeare Company (RSC) and adapted from the French original by Emmy and Bafta-award winning writers Anil Gupta and Richard Pinto (‘The Office’, ‘Goodness Gracious Me’ and ‘The Kumars at No.42’), it’s a very fresh and modern take on a classic 17th century play.

The RSC describes it as “a wicked comedy about faith, family and #fakingit”.

And instead of 17th century Paris (the play’s original setting), it’s now located in contemporary Birmingham with a Pakistani Muslim family at the centre of the action.

The infamous ‘Tartuffe’ (Asif Khan) himself is now a bearded holy man who goes by the name of ‘Tahir Taufiq Arsuf’ and ingratiates himself into a well-settled and very likable, Pakistani Muslim family.

Tartuffe then proceeds to wreak havoc upon their lives by twisting the head of the family, Imran Pervaiz (played by Simon Nagra), around his finger to his own malicious advantage – though the man in question does not see or understand that and believes Tahir to be an upstanding member of the faith and knowledgeable and cultured because of his spirituality. But he isn’t really anything of the sort.

Asif Khan, who plays Tartuffe (you may have seen him in the posters with the long beard), was very clear about the man he portrays.

He told www.asianculturevulture.com: “He’s a conman. He masks it by appearing as a very pious figure, but he’s really manipulative and he’s very good at reading people’s emotions and influencing people and improvising.”

Indeed, in the play, he’s a master at it, turning every situation to his advantage and taking Imran on a terrible journey, which is both fun at one level and disturbing on another.

Director Iqbal Khan, a Brummie himself and born into a Muslim family, expanded on the universal themes of the play and feels its greatness lies in just how relevant the play is, even today.

“This man (Tahir) has come into these people’s world and is branding their truth for them – and doing so in a world that is very a complicated place, but he provides them with consoling and simple solutions and it feels very much like the sorts of issues we’re dealing with now – charismatic leaders who offer reductive solutions.

“And one thing we realised quite early on was that this play isn’t really funny unless the religious context is serious, and dangerous and subversive – and that’s why we’ve set in Birmingham, in a place where there is a Pakistani Muslim community and it’s not a homogenous community.”

One of the chief characters of the play is a maid Darina (Michelle Bonnard), who works in the house and is a white Bosnian Muslim woman. She acts as a sort of narrator who knows all the family’s secrets.

There’s a breath and depth to the family many people will relate to – they’re good, decent folk, but everything turns when Tahir is about.

“It’s quite subversive,” said Iqbal Khan. “It’s a kind of critique of certain kinds of clerical practice and not of the religion itself but the way it can be sold, the institutions that are built around religions and the susceptibility of certain people.

“It’s very funny. I think ultimately the play is very compassionate about the people who are taken advantage of – or exploited.”

Its humour and bite are, perhaps, proof of its longevity and relevance.

Asif Khan is an exciting talent and it should be tremendous to see him tackle a character who has charisma and guile and presents one face to the world but is really a man who beneath the religious veneer, just enjoys cars, money and women.

“It was quite a provocative play for its time and Moliere had difficulty staging it but once he did get manage to get it in front of the public, it really went down well and it’s been done so many times since.

Tartuffe by Moliere in a new version by Anil Gupta and Richard Pinto, directed by Iqbal Khan