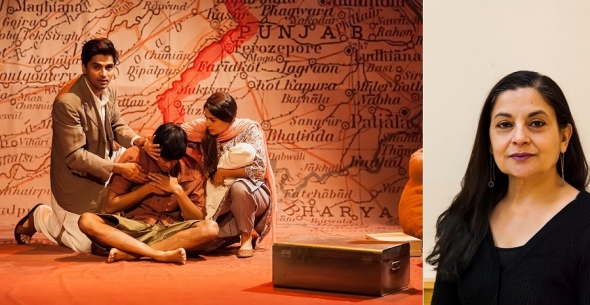 ‘Child of the Divide’ is a play that first emerged last year and is on a currently the very final leg of its nationwide tour of the country. Based on the events of Partition, it examines the fate of a little boy who gets separated from his parents during the turmoil.
We managed to pin down writer and actor Sudha Bhuchar – who recently featured as a revolutionary Indian leader in Tanika Gupta’s stirring Independence play ‘Lions & Tigers’, at Shakespeare’s Globe and has been in popular TV series like ‘Stella’ on Sky – to talk about the themes of her own production and why it resonates with so many…

www.asianculturevulture.com (ACV): What led you to the subject and made you want to tackle one of the great tragedies of the 20th century and make it relevant to children?

Sudha Bhuchar (SB): In 1997, Tamasha were invited to mark the 50th anniversary of Partition with a show that opened the 50th Edinburgh International festival.
Kristine Landon- smith and myself (Tamasha’s co-founders and then co-artistic directors) decided to make a play called ‘A Tainted Dawn’ which was shaped from eight short stories about the Partition of India and the creation of Pakistan; many of these stories Kristine had produced for radio and she was struck by the emotional resonance.
One of those stories was ‘Pali’ by renowned writer Bhisham Sahni. That story about a lost Hindu boy who gets separated from his parents as they leave their home amidst the political upheaval, remained with me and I wanted to make it into a fuller piece and look at the lives of children and how they navigate such turmoil.
This opportunity presented itself in 2006 when Polka Theatre (Wimbledon) and Tamasha co-commissioned me to write ‘Child of the Divide’.
When I stepped down from Tamasha and set up my new company, Bhucharboulevard, I wanted to revive this play to mark the 70th anniversary of the Partition and provide the opportunity for a whole new generation of audiences to connect with this story.
I am glad to have had the support of Polka Theatre, along with Tamasha and other partners like Big Imaginations (a children’s festival in the NorthWest), and other partners like the Partition History Project, The National Archives and sponsors like Sunmark Limited enabled us to deliver education materials and workshops. The show has been touring and will be at Tara-Arts from today through till Saturday (November 11); I am particularly excited about that since I began my journey in the field of theatre with Jatinder Verma (Artistic director Tara Theatre).

ACV: What were the special challenges of writing for children. Do you have a lot of experience of this?

SB: This is my first play for children and young people and I approached it in the same way I would any of my work.
It was important for me not to speak down at children and also to present a full picture of what happened and what the characters in ‘Child of the Divide’ had witnessed.
I was concerned about the darkness and followed my instinct in terms of how much to portray that without diluting the experience.
There is a lot of sadness but also laughter and love which I hope comes through the friendships and how the children navigate the situation and grow up during the course of the play.
It was important that the parents were portrayed with depth and complexity and not as cardboard cut outs from the point of view of the children; but rather fragile and wounded in their own right.
I also knew that I wanted the play to be for adults and children alike and to be balanced about the inter-faith violence and to not point the finger in terms of a particular community or religion. I have two children and they were invaluable in the creative process as their voices have helped me to shape the dialogue and emotional journey of the piece.
Also, I went on to write another piece for children called ‘Small fish big cheese’, which was part of the Class Acts festival in 2011; commissioned by Unicorn theatre (a children’s venue in Southwark).

ACV: Congratulations on your Offies nomination (recognising productions outside The West End), and by all accounts, the reaction has been very positive and engaging, what has connected with audiences?

SB: I have been thrilled by the reaction of young people and adults as well. There is a visceral reaction from many in the Asian community; a feeling of ownership that this is our history.
Children are curious about what their grandparents went through and are seeking a compassionate narrative to help them understand who they are. Many children have stayed behind and asked piercing questions about the period of history as well as about identity and belonging.
They have expressed and shared views on the themes such as adoption, religion, love and friendship.

ACV: What relevance do you think the ‘Child of the Divide’ has for us today, in terms of diversity and pluralism?

SB: Many people have picked on a line from the play and expressed that they feel it is the central message of the play. This is when the half Hindu/half Muslim girl Sita/Hasina says’People should belong to each other and not to places’
For me all my body of work is a cry against division and intolerance and child of the divide shows us that the wisdom of youth can pierce through the fears and prejudices of adults.

ACV: TV presenter Anita Rani who has a very personal connection to Partition (illustrated in the BBC’s own Partition series) is a patron and mentioned ‘Child of the Divide’ possibly being made into a film, what can you tell us about that?

SB: I am thrilled that Anita and many others are saying it should be a film.
It is too early to say and we all know how challenging it is to get anything on screen and it hasn’t been my area of expertise. But plays like ‘East is East’ (an original Tamasha play) worked so well on the big screen and attracted wider audiences, so who knows? I am open to offers and conversations!
I think the stage version should certainly have a future life and I am having conversations about that including exploring international interest.

ACV: How did you find the cast and how it has been for them? It’s an intense and emotional play at times and challenging for a young cast, how have they coped and how have you been able to help and coach them, as an experienced actor yourself?

SB: We found the cast through open auditions. One of the cast members, Devesh Kishore did the pilot version of the play last year and I am thrilled he wanted to do the tour. Jim Pope is a sensitive and talented director with a rigorous and open practice that encourages truthful performances that are recreated and different every night. The cast have found that to be an anchor. They are also very engaged with the play and the process has encouraged them to look at their own history and family and all of them love to have a relationship with the schools and family audiences. And the atmosphere in the rehearsal room has fed into the atmosphere on tour and they all get on really well. Our creative and stage management team are tremendous and have helped to steer the young cast.

Listings
There are a series of post-show talks and discussions accompanying performances. See below for details.
Today to Saturday (November), 7.30pm Tara Arts, 356 Garratt Ln, London SW18 4ES
All are free after the performances
More info/tickets: https://www.tara-arts.com/whats-on/child-of-the-divide

Tonight (November 7)
Led by Iqbal Husain, Regional Community Partnerships Manager, Education and Outreach Department.
Actors will read out extracts from the National Archives records to highlight the themes and context in the play ‘Child of the Divide’ about the Partition of India and will be accompanied on stage by Sudha Bhuchar, writer of the play.
This is the first time that The National Archives has worked with a theatre company to use its records to reach out to audiences, giving added historical reality and context to a play inspired by real-life events.
About 30-40 mins
Wednesday – Post show talk with the cast about the show, playing parents and children and the themes of the show.
About 20-30mins
Thursday – Post show talk: ‘Partition and its Legacy’
Speakers: Professor Sarah Ansari, Professor of History at Royal Holloway, University of London & Rev. Martin Henwood, of The Partition History Project – an organisation that aims to raise awareness about this monumental historical event which has been largely brushed over by public history institutions and the national curriculum & Jatinder Verma, artistic director, Tara-Arts on how arts can help with teaching of history
About 30 minutes. All above FREE to ticket holders