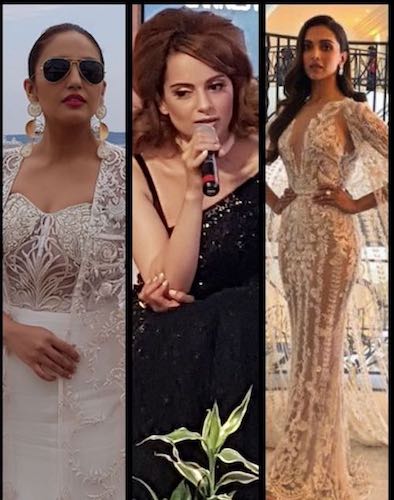 SHE MIGHT not be exactly the best known film star in town right now – but Deepika Padukone, one of Bollywood’s biggest stars, owns Cannes.

You might think that a description of shameless hyperbole straight out of a L’Oreal Paris PR handbook, but few actresses on this planet have 23 million followers on Instagram and almost a million likes for a series of posts from the French Riviera.

She loves Cannes and Cannes loves her back…

Her arrival in the once sleepy fishing port was trumpeted by a picture of simplicity but immense power.

In the days when Brigette Bardot and Anna Karina used to command the attention of those walking the Croisette – the Bollywood L’Oreal Paris contingent of which Padukone is a more recent addition, shimmer like ethereal images, both of this world and not.

And we have yet to see how Aishwarya Rai, a regular now for some years as a Paris L’Oreal ambassador, will enter the fray – and what of the recently hitched Sonam Kapoor expected here in the second week as the glitterati head for Monte Carlo and the F1 Grand Prix – and leave behind more serious souls who still want to believe film has more of a connection to art and not commerce…

There is too a new addition from South Asia to the L’Oreal Paris stable – Pakistan’s Mahira Khan makes her debut as an ambassador for the French cosmetic giants and one of the festival’s principle sponsors. She is expected to surface on the red carpet here on Saturday or Sunday. It’s a real shame the terrace on the Hotel Martinez at the top now belongs to Chopard, not L’Oreal. Expect Chopard to steal a march there in the coming years.

Away from the glitz of the Martinez (at one of the end of Croisette), www.asianculturevulture.com has been busy in prep.

Later, we will put out first video interview of the festival. Shay Grewal of Sunny and Shay on BBC Radio London is interviewing some of the top personalities here for acv.

She talked to Huma Qureshi, who made her Cannes debut as far back as 2012 – when no one knew her or her director, Anurag Kashyap.

Their journey since has been spectacular – Kashyap is one of the best known of South Asian figures on the Croisette and it won’t be long surely before he returns – and possibly to one of the bigger sections and not just the Director’s or Critics’ sections – which are a step down from the principal films in competition and the Un Certain Regard Section. Qureshi has already enjoyed some international success and is keen to press her credentials.

In the official Un Certain Regard section, we have Nandita Das about to introduce the world to the sharpness and foresight of Saadat Hasan Manto – quite possibly the greatest Urdu writer of the last century.

Here was a man loyal to the idea of India and its rich and sometimes beguiling diversities and complexities, only to up sticks from Bombay (as it was then) and head over to Pakistan, as a Muslim homeland. Irony then that Manto who had little time for labels or orthodoxies (Muslim or Hindu) perished from alcoholism.

Yesterday, the Indian pavilion saw both Kangana Ranaut and Qureshi – both here for French vokda brand, Grey Goose, present themselves in different ways.

Qureshi was lightness (in a good way) and politeness personified – she is both charming and honest about what Cannes means to her and she opened up about the cause of women, not just in cinema but everywhere, in Shay’s interview. Qureshi, who starred in Gurinder Chadha’s ‘Viceroy House’ is one to watch… (in the West).

Ranaut, looking dainty and tough at the same time, delivered some pithy soundbites and retreated to her Grey Goose minders following her session in the India pavilion here yesterday. She declined interviews and did no one notice that she said the word, “Sh**” in her short address and Q&A with the audience? She is still a rough diamond. Cannes could make her if handled correctly.

From another era and of a quite different vintage is Derek Malcolm, 40 years on The Guardian, and another five on the Evening Standard, and one of the most familiar British faces on the Croisette – he talked to us about how the Venice Film Festival – once superior to Cannes (in the mid-half of the 20th century) is mounting a renewed campaign – his love of India and how he had to abandon an interview with one well-known Hollywood hellraiser here after seeing the man’s bare bottom…

Thanks for all the RTs and interest, if we disappear it’s only because there are interviews in the pipeline and many moving targets. Let’s reconvene tomorrow and exchange thoughts…till then goodnight

We saw ‘Rafiki‘ last night…more on this later…