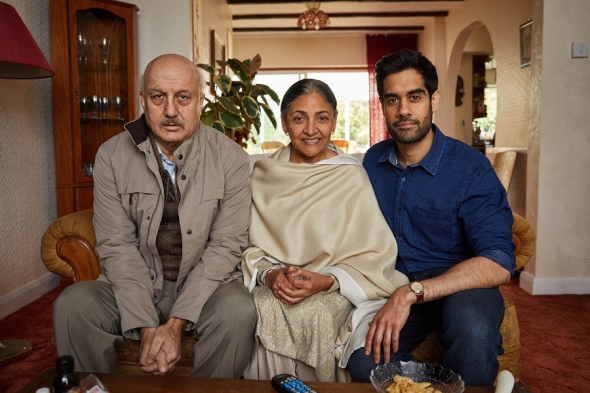 SEVEN years in the making, Sathnam Sanghera’s memoir ‘The Boy With The Top Knot’ has been made into a single piece film that is set to become one of the most honest and heartfelt dramas that’s ever aired on British TV.

The film previewed to a sold out audience at the BFI where some of the team involved in the production, alongside Sathnam himself, took part in a post-screening Q&A hosted by presenter Anita Rani.

Giving fascinating insights into the casting, scripting and filmmaking process, here ACV has compiled the best bits of the conversation, to give you 10 reasons why you need to watch ‘The Boy With The Topknot’ which airs on BBC 2, 9pm, Monday, November 13 2017.

1. This was a story in demand
‘The book was so beautifully written and a lot of people wanted it. I took it to quite a few production companies who wanted it, as did the BBC and Channel 4. I decided Kudos and the BBC were the right fit.’
Nisha Parti, Producer

2. The adaptation stands alone in its own right
‘Everyone involved in the film read the book and there were so many things people wish had been included so it was a challenge. The book zips all over the place but I instinctively knew the film had to be linear, so it was a case of simplifying. Though if anyone has enjoyed this and hasn’t read the book really do go and get it because it’s a treat from beginning to end.
Mick Ford, screenwriter

3. The cast is as authentic as it gets
‘It was really important to me that the parents were first generation Punjabi actors. I’ve grown up watching Deepti as an actress and of course Anupam is a legend so we wanted him to play the role. The casting of the family was very important to me. You see so many families on TV where one person is Bengali and one is Pakistani, they are meant to be brothers and sisters and you’re like, eh? So it was important that the family were Punjabi and looked and felt like a family. We tried really hard to find Punjabi actors and actually they do exist.
Nisha Parti, producer

4. It’s a universal story
‘We didn’t ever try and tell the story of all Punjabi Sikhs or all second generation Indians or people with schizophrenia, it was all specific to each character. We had a Punjabi consultant who set me up with three lovely aunties and I also enlisted Sathnam’s mum. There were also enough Indians on the set to know how to do things.’
Lynsey Miller, director

5. It was filmed against the clock
‘We had just three weeks so we were so lucky every got involved. Sometimes you get resistance but all the departments got on with it. Make-up had 10 minutes to change wigs and the cinematographer didn’t have a lunch break, even during breaks he was working on the lighting. We knew what we wanted and so I created a shot list and the actors had the freedom to bring what they wanted to it. We were filming 13 to 14 hours a day and then the actors would go home and learn their lines for the next day.’
Lynsey Miller, Director

6. Sacha Dhawan is at his finest in the lead role, though he nearly didn’t take it
‘The BBC announces what projects are are coming up and every actor looks at the list and is ‘yep, no, no, oh Indian guy, yes!’ I read the book I was just so proud to have this written about a family but not just Sathnam’s, it was really about my family too there was just so much I could relate to then the script came along and auditions and I read it but I turned down auditioning for it because I was too scared. I’m so used to playing characters that are so different to me but this was so close to me I thought I don’t think I can do it. As much as it was Sathnam’s story it was personal to me. It was actually my girlfriend who said you’ve turned it down but you keep talking about it – you’re scared. The project you fear the most is the one you should be fighting most for. So I self-taped and met Lindsey and Nisha and it was great.’
Sacha Dhawan (actor playing Sathnam)

7. Anupam is a joy to watch
‘We were rehearsing for quite a bit before Anupam Kher came onto set. He comes in, we chat for five minutes, then he gets a drink and takes lots of selfies. Me and Lindsey were wondering if he’d be alright without rehearsing and then we’d film the scenes and he was effortless; a joy in every take.’
Sacha Dhawan

8. Mental health is tackled with sensitivity
‘My father had schizophrenia as does my sister but I wanted to show that’s just one side of the story, that my father could still be great and that’s the most important thing. He’s been sick but he’s been a bloody great father and sometimes all a kid needs from their father is just that, to be there.’
Sathnam Sanghera, Author

9. Sikh stories are rare on TV
‘Sikhs are a small community, there are 300,000 of us In the UK) but there aren’t many writers. It’s not a literary culture, if you’re a writer, you’re one of the first so what you write about is seen as representative of the community when really you are just telling your story. You do therefore get negativity responses, mostly from people saying their experience wasn’t like that and that’s because it’s my family not theirs. I was also slightly worried about how they would portray the scene of hair being cut as that’s seen by fundamental leaders as sacrilegious, maybe they will react, that’s something to look forward to.’
Sathnam Sanghera

10. Sathnam loves it
‘Watching it is the most painful thing that’s every happened to me. It’s painful to watch and even more so when people are watching you watch. It’s really really intense but I’m so pleased with it and I’m really pleased they filmed it in the Midlands. I read recently that 90 per cent of the time people hate how their memoirs get adapted but not only do I not hate it I love it and I’m just so lucky that the team really got it.’
Sathnam Sanghera

Listing
The Boy With The Top Knot airs on Monday, November 13, BBC 2, 9pm.
ACV rating: ***** (out of five)
Previously http://asianculturevulture.com/portfolios/boy-topknot-best-bbc-commission-year/