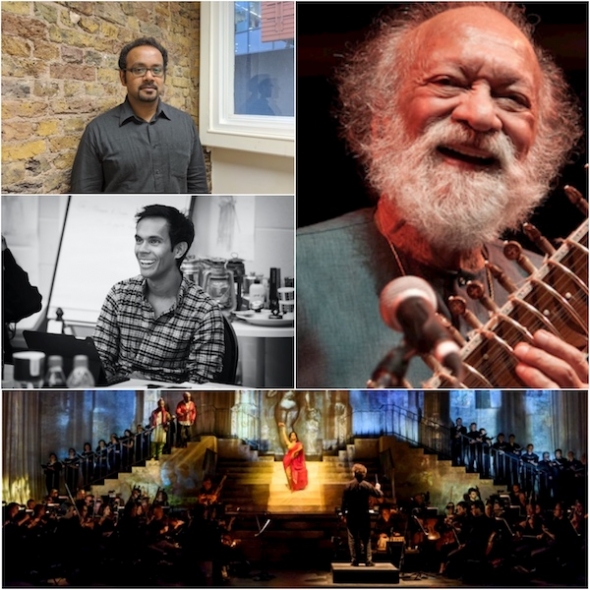 AS A CURTAIN raiser for the Ravi Shankar 100 centenary celebration at the Southbank Centre season this year, it probably doesn’t get any better than this.

For one night and – one night only – Ravi Shankar’s only and posthumously staged opera comes back to the Royal Festival Hall this Wednesday (January 13).

‘Sukanya’ was last performed in 2017 at the Southbank Centre as part of the now discontinued Alchemy Festival and enjoyed its world premiere at the Curve Theatre in Leicester before playing in Birmingham and finishing in London that year. It has not been performed anywhere since then.

Completed by close friend and musical collaborator – conductor David Murphy after Ravi Shankarji’s death in 2012 – and with help from sitar maestro daughter Anoushka, ‘Sukanya’ was written for the London Philharmonic Orchestra (LPO) and was managed and supported by the Royal Opera House Convent Garden, and The Curve Theatre, Leicester and the charitable arts organisation, the Bagri Foundation. This time it is the LPO that is organising this one-off show.

Suba Das, the director for ‘Sukanya‘ and the artistic director of High Tide (a Suffolk-based theatre company), first came across the work in 2014 when he was associate director of The Curve and casually observed rehearsals and was later asked by Murphy to direct.

Das told www.asianculturevulture.com: “There is so much in this – it is unique, there is nothing like this at all.

“It is an extraordinary work – musically you have not only the classical Indian music, on top of that the operatic element, and the western music and on top of that bharatanatyam dance and the story and the libretto by Amit Chaudhuri (novelist, singer and composer and professor of contemporary literature at the unversity of East Anglia).”

For British musician Thevarajah Pirashanna (pictured below) who plays a variety of Indian percussion instruments alongside the LPO for ‘Sukanya’ it will be a night of mixed emotions.

A musician with more than a decade of experience, it was the great Ravi Shankar who first brought him to the Indian classical music scene and nurtured and encouraged his talent and so began a long association.

“He (maestro Ravi Shankar) meant a lot to me – to be part of this celebration, I feel that I have to be part of it, almost in a selfish way.

“I spent a lot of time with him and he had a huge and pivotal impact on my life.”

Thevarajah first played with Ravi Shankar in 2002 at The Concert for George – in memory of maestro Shankar’s good friend George Harrison, the ex-Beatle who perhaps was most influenced by the band’s encounter with the Indian classical icon back in the 1960s.

Thevarajah, who trained in mridangam (a South Indian drum like instrument) under renowned teacher and performer Balachander at The Bhavan (an Indian artistic and cultural centre in west London), caught the ear of the great Ravi Shankar and there was no looking back.

He was just 16 or so, and still at school but continued to perform with the master and Anoushka Shankar when it was practical.

His career as an Indian percussionist took shape and was born essentially from the iconic figure’s deep and abiding musical patronage.

Thevarajah completed a business management degree at the University of Westminster, but played with the great Shankar in his spare time.

“Not long after I finished university – Raviji called me and asked: ‘Are you done with university?’

“He told me: ‘You don’t belong in a classroom, you belong on the stage… there is a show at the Hollywood Bowl, do you want to be part of it?’”

It was 2009 and after this, his bond with the greatest Indian classical musician of the modern era was sealed.

“I can hear his (Raviji’s) voice in ‘Sukanya’,” explained Thevarajah. “That’s him and obviously every time we do it, I wish he was there.

“In the back of my mind, I am always thinking – what would he think about this, what would his take be on that section – with him, we we were always fine tuning things to the day before a show.

“He was very interactive and it was all about improvisation (which is at the heart of many Indian classical performers’ personae). He would see the musicians there (at rehearsals) and say: ‘Why don’t you play this and you play that…”

Thevarajah knew Murphy well and added: “You don’t get many Indian operas – certainly not at this kind of level.

“Here is western and Indian music. It’s almost like everything he did is in this opera.

“He started off with dance, he is one of the pioneers of East West (music) and that is there – he loved art, that was there.

“It’s his journey as a whole.”

Thevarajah plays ghatam (a clay pot) morsing (a mouth harp) and alongside his teacher Balachandar (who is on mridangam for ‘Sukanya‘), the pair will perform konnakol – a verbal rendition of classical Indian rhythms.

‘Sukanya’ returns with much of the same cast and crew behind the 2017 production.

Das felt there was a great sense of show in the work and that it was bit “Hollywood” and had a populist touch which made it less foreboding than much of western opera.

“It’s dazzlingly accessible and a great cultural experience – it has a pop quality to it as well – and it feels like a Kylie Minogue concert,” he joked.

‘Sukanya’ is a story that comes from the revered ancient Indian holy text, ‘The Mahabharata’ and recounts the story of the blind sage, Chyavana.

Elderly and blind, he marries the beautiful Sukanya who is devoted to him, despite their age difference. She does so out of loyalty to her regal parents and the wishes of her kingdom.

Two gods look down upon this scene with horror and envy and devise a cause to bring trouble and strife to this union.

While attesting to the production’s spectacular qualities and its character as a work of spectacle, Das said it shouldn’t be forgotten that Raviji wrote the concert as a tribute to his dear wife and now widow – whose name is also Sukanya.

“Female characters in opera can be problematic – they are either raped or die tragically, but here Sukanya is a powerful character and it’s a tribute to his widow as an extraordinarily intelligent woman and he (Ravi Shankar) wrote this as an acknowledgement of that,” explained Das.

‘Sukanya’ has yet to be performed outside England to date.

Das said it would be great to take it to India, but the costs involved of getting such a huge cast together would require serious investment. As well as the orchestra and main singers, there is an ensemble of five dancers led by Gauri Diwaker, who performed in the 2017 production under choreographer, Aakash Odedra.

“If anyone’s reading this out there and can open their chequebook…” Das quipped.

More on the Ravi Shankar 100 centenary celebrations at the Southbank Centre this year… http://asianculturevulture.com/portfolios/shankar-100-indian-sitar-maestro-ravi-shankar-centenary-to-be-celebrated-with-concerts-films-and-exhibition-at-southbank-centre-in-2020/