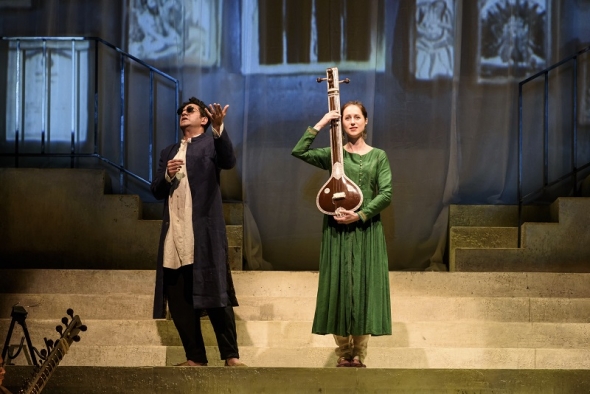 By Suman Bhuchar
ONE OF THE HIGHLIGHTS of Alchemy 2017 was the London premiere of Ravi Shankar’s Sukanya the Opera.

It begins with a lone man sitting up some steps on stage playing sitar and then a shehnai (a classical wood instrument) comes in.

The libretto by Amit Chaudhuri begins with homage to the power of love and desire.

“Goddess I won’t speak your name… Oh Yes, here’s Kama behind branches, you are rarely worshipped and you make politicians pull their pants down…..a sage turns into a fool.”
(Although the opera was sung in English, we were helped by surtitles)

A princess, Sukanya (Susanna Hurrell) goes into the forest, and she sees what appears to be “a heap of dust” with shiny bits that gleam. She reaches and prods them and hears a shriek! “Can dust feel?”

Lo and behold it is a sage in contemplation.

Rukhmini Vijaykumar, one of several dancers in ‘Sukanya’

“Before you came even these ants didn’t disturb me.

“My bones are old, my skin is old, my history goes back” cries the irate sage, who has now been inadvertently blinded by the Princess.

Wishing to make amends her father, King Sharyaati (Keel Watson), sings: “Let me offer you my daughter, Sukanya in exchange of the harm done in exchange also she might learn from your wisdom.”

The sage is Chyavana, (Alok Kumar) and they are married. There is a backdrop of projections and dance while dancer, Rukmini Vijayakumar is spellbinding to watch while the shehnai played by Ashwani Shankar is haunting.

Sung beautifully by Hurrell and Kumar in the lead roles, this is basically a love letter by Ravi Shankar to his wife, Sukanya and also a lesson in Indian music versus western music.

The singing and dancing were great to watch, the words a tad simplistic and the music performed by the London Philharmonic Orchestra conducted by David Murphy, is powerful, blending the experimental nature of Indian and Western music. That music was first composed by Ravi Shankar in his life while the director of ‘Sukanya’, Suba Das adopts a playful attitude to the whole project.

The second act begins with the back wall of the stage projecting several images of Ravi Shankar and the sound of the shehnai, where Chyavana, the blind hero is giving a lesson in music to his wife — echoes of Ravi Shankar teaching daughter, Anoushka, perhaps and sharing some of his own personal history.

“It was an afternoon in August, I bought my first tanpura….” and there is a lot of explanation about two music systems for the first twenty minutes and then we have the naughty celestial Aswini Twins (Njabulo Madlala and Michel de Souza) entering again and we’re back into the Sukanya plot and she is set a test to ascertain which of the three men who now look alike is the real husband: “one face, one voice, three persons”, is her dilemma and no prizes for guessing…

This evening was an event and enjoyable as that.

The mood of the music ranged from the energetic rain falling in the beginning to contemplative to romantic and according to the cognoscenti, it reminds them of the sheer range of Ravi Shankar’s oeuvre.

‘Sukanya’ was performed as part of Alchemy’s opening on May 19 and first premiered at the Leicester Curve Theatre on May 12 and was in Manchester and Birmingham, before coming to London.

Privacy & Cookies: This site uses cookies. By continuing to use this website, you agree to their use.
To find out more, including how to control cookies, see here: Cookie Policy
← Vaseem Khan’s new Malabar Detective Series has a formidable woman police officer at the centre of them and continues to impress…
LIFF 2022 (wrap) – Win for Pan Nalin’s irresistible ‘Chhello Show’; other award winners; and who and what impressed us (with links to coverage…) →