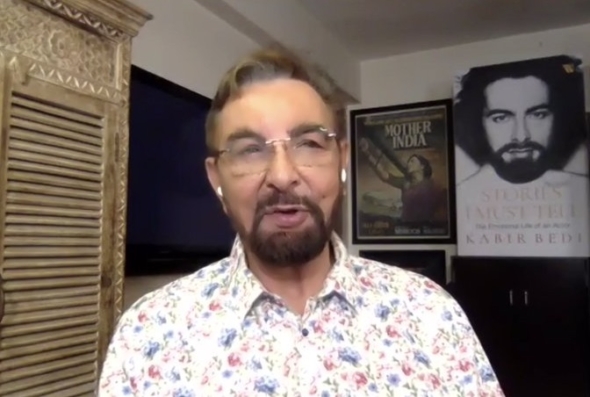 HE WAS AND BELIEVES he is the only Indian actor to have featured in a James Bond movie as an Indian, starred in a long-running Italian series, called ‘Sandokan’, and appeared in both Hollywood and Bollywood movies too.

Kabir Bedi also had a famous Derby-born mother Indian freedom fighter mother, Freda, who fell in love with his Punjabi Sikh father – both went onto become major figures in different faiths – with his mother becoming the highest ordained female Tibetan Buddhist monk later in life. Earlier, she had been handpicked by Mahatma Gandhi to join his inner circle and fight for India’s Independence.

Bedi also happened to have met the Pope, the Dalai Lama – raised the issue of Diversity in Hollywood long before it become a thing, divorced three times, mourned his son and professionally saluted a granddaughter who is proudly following in both her mother’s and his footsteps now.

Bedi’s autobiography – published earlier this year in India only – ‘Stories I Must Tell: The Emotional Journey of an Actor’ – is a best-seller there, and is just about to go on the worldwide platform Audible as an audio-book too.

He is currently talking to a number of both Indian and foreign companies which want the rights to a make a film or a series on his life and adapted from his book.

In what has been an eventful love life – he has married four times – he romanced Perveen Babi, one of Bollywood’s most glamorous figures in the 1970s and confessed he was practically in an open marriage at the time.

His wife Protima Bedi and the mother of his two children had already confessed to infidelity, he reveals in the book and was well aware of his early dalliances with Babi.

Just like his book, which has been widely praised for its candour and frankness, he spoke openly and refreshingly about all of the above in an Indian Journalists Association (IJA) Zoom meeting yesterday (October 6).

It was delivered in his bewitching, beguiling baritone – he still gets much voiceover work and in India, few could fail to recognise the Bedi timbre there.

Highlights from the conversation*

When www.asianculturevulture. com asked who had most impressed him in his 75-year-old life, he said: “The Pope and the Dalai Lama had a real spiritual energy, but Sean Connery was twice the man you saw on screen.

“He is my favourite Bond.”

Bedi famously appeared in ‘Octopussy’ in 1983, alongisde then Bond, Roger Moore, playing an assistant to a villain – there was much excitement both at home in India and among the diaspora at his appearance in the popular global franchise.

He confessed to being a big fan himself, revealed he has not seen the latest ‘No Time to Die’ and is a great admirer of the present Bond, Daniel Craig – saying he had furnished the character with much new depth and taken him to yet greater heights.

Bedi said working on Bond in India gave him huge satisfaction and he remembered, during one particular sunset, looking over the Lake Palace Hotel in Udaipur with the cast and on the set of Bond, as one of his life’s most memorable moments.

He said when it came to charity and helping people, one Bollywood star stood out for him – Salman Khan.

“He has the biggest heart,” said Bedi.

Of his professional roles, he says essaying the character of Shah Jahan, one of the greatest of all Mughal rulers and the man responsible for the building of Taj Mahal in Agra, was among his finest professional moments.

He appeared at the Luminato Festival – one of the world’s largest multi-arts festivals in Toronto – and reprised the Shah Jahan role for Canadian playwright John Murrell’s ‘Taj’. He also played the part of Shah Jahan in a 2005 Bollywood film, ‘Taj Mahal: An Eternal Love Story’. Bedi has also appeared in the West End in London in ‘The Far Pavilions’.

His early forays in Hollywood were difficult – few people knew him and cared even less for his reputation and stature.

“I had to audition,” he lamented, coming from a film culture where such things were unheard of for anyone established or respected.

There were no parts for South Asians in Hollywood at that time, he said – they were completely invisible.

“How can you work if no one is writing parts for you?” He explained. He took to writing about the issue in the trade press and did find parts when he put himself forward for roles that were ‘ethnically ambiguous’.

He spoke about his role in the 1978 film, ‘The thief of Baghdad’ alongside Roddy MacDowell (best known for a part in the first TV version of ‘Planet of the Apes’) and then Bedi featured in the long-running Californian TV soap, ‘The Bold and the Beautiful’.

He feels his push for Diversity helped Indian Americans like Mindy Kaling (‘Never Have I Ever’) and Kal Penn (‘The Namesake’) and he said that he had always rated Priyanka Chopra Jonas – now established in Hollywood and the only Indian-born actor of her generation to have done so.

Calling her a friend, Bedi said: “I knew she was going to be successful. I acted with her in her first Bollywood film ‘The Hero: Love Story of A Spy’.”

Towards the end of the Zoom and in response to another question he spoke about the subject of mental health.

His first son, Siddharth suffered from schizophrenia and took his own life in 1997. This and Babi’s mental health issues are discussed in the book and he told the journalists that India needed to break the taboo on the subject.

On a much happier note, he showed obvious pride when talking about his granddaughter, Alya Furniturewalla, whose mother is Pooja Bedi, Kabir’s daughter, who was also a successful Bollywood actress.

Alya F, as she is known in the industry, received her first accolade, the Filmfare Award for Best Female Debut in the film, ‘Jawaani Jaaneman’ last year from her grandfather.

*Bedi introduced himself and the book, before taking questions from IJA President Rupanjana Dutta and others and quotes are abridged.

The full 60-minute Zoom will be published by the IJA in due course, follow social media https://twitter.com/ijaeurope

Privacy & Cookies: This site uses cookies. By continuing to use this website, you agree to their use.
To find out more, including how to control cookies, see here: Cookie Policy
← Monsoon Marriages – our Bird Eye Review show claws ‘Maharani’, ‘Ek Mini Katha’ (penis drama), and ‘Triple Whammy’…Monsoon Marriages
London Indian Film Festival 2021 Opening gala film: ‘Womb’ – Women of My Billion – filmmakers Srishti Bakshi and Ajitesh Sharma on their remarkable film about 3,800km India walk and campaign against violence against women… (world premiere) – video →