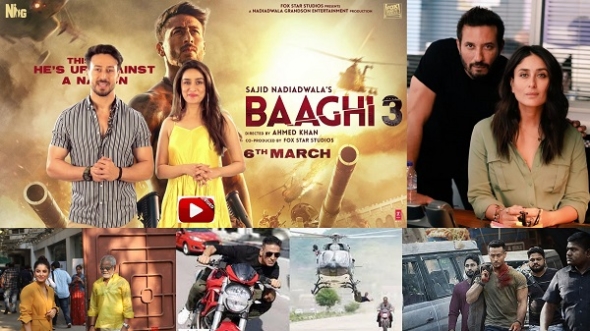 NB: This article was originally published on February 29 and reloaded on the date indicated because of a technical hitch in a server switch

Bollywood bros and sistas – it’s Mumbai calling, how the damn hell are you? Still freezing, wet? Oooh hooo, mummyeee – never mind, I am here to distract you with Bollywoodasianculturevulturevibes!

SO, the big man rolled into town this week and gave the country a thumbs up! No, not the Big B, but the Big D or should that be the Big Sh…now, now, we must be gracious to all guests, especially if they show love – even more so; even if they don’t, we must be kind and understanding – after all, for around 500 years, a lot of outsiders came here, and never went back because we so so lovely…and they only wanted to look after us…
The big thing this week is not Donald, but Tiger and Shraddha giving us all a shoutout – thank you!
See guys, they do care about you – even though you live in a dark, dank world, where there is too much water, wind and cynicism… and to say nothing about a man called Boris who rules your hearts…

Baaghi 3
Cast: Tiger Shroff, Shraddha Kapoor, Ankita Lokhande
Director: Ahmed Khan
Release Date: March 6
A REMAKE of the 2012 Tamil film ‘Vettai’, ‘Baaghi 3’, is the newest instalment in producer Sajid Nadiadwala’s successful franchise. Shraddha Kapoor, who featured as Tiger Shroff’s leading lady in ‘Baaghi’ makes a comeback in the film. Disha Patani was part of the second instalment in the series. The film has been shot extensively in Morocco, Turkey, Egypt, Serbia and Georgia. For the film, Tiger had to undergo training in Krav Maga, a fighting system developed in Israel and then instructed in the use of machine guns, pistols and shotguns in Georgia. Another Israeli connection to the film is in terms of actor Jameel Khoury, who had earlier appeared in the Hollywood film ‘Body of Lies’ (2008); he plays the main villain in the film.
This month is all about action. Akshay-Ajay-Ranveer and Tiger. Steady. Film action, people, film action!

Angrezi Medium
Cast: Irrfan Khan, Kareena Kapoor Khan
Director: Homi Adajania
Trailer out: yes
Release Date: March 13
HOMI ADAJANIA, who gave us films such as ‘Finding Fanny’ (2014 – let’s not get low about this, you silly Britisher boys, aka Jay from ‘The In-Betweeners’), and ‘Cocktail’ (2012) is back with his newest offering, which is a spin off on the 2007 comedy ‘Hindi Medium’. The film was earlier set to release on March 20. In fact, it was Karan Johar, who announced the new date of the film on Twitter. Kareena Kapoor Khan essays the role of a police officer in the film and this is also the reason why the actor agreed to play the role as she has never been a cop on screen. This is also Irrfan Khan’s first film after he was diagnosed with a rare disease called Neuroendocrine Tumor in March 2018. He put out a personal message on Youtube, ahead of the trailer, saying he couldn’t do publicity as he ‘negotiating’ with some unwanted guests. Go see this film if you are an Irr-fan! And him in your backyard – go!

Kaamyaab
Cast: Sanjay Mishra, Deepak Dobriyal
Director: Hardik Mehta
Trailer out: yes
Release Date: March 6
THOUGH hard to believe, Sanjay Mishra singlehandedly carries the weight of ‘Kaamyaab’ on his shoulders. Kaamyaab is based on the life of a character actor called ‘Sudheer’, played by Mishra and how he embarks on the difficult task of completing his 500th film.
The film’s trailer was released on youtube and hit six million views within six days only because of the fact that it has been released by Shah Rukh Khan’s Red Chilies Entertainment. There were even rumours that SRK stars in the movie. The rumours were put to rest by Mishra.

Sooryavanshi
Cast: Akshay Kumar, Ranveer Singh, Ajay Devgn, Katrina Kaif, Jackie Shroff
Director: Rohit Shetty
Trailer out: no
Release Date: March 24
ACCORDING to data compiled by IMDB, this is one of the most anticipated movies of the year. It will see three of Bollywood’s biggest stars, Akshay Kumar, Ajay Devgn and Ranveer Singh, vie for screen space along with an equally popular director Rohit Shetty, who has several hits to his credit in a short span of time. Another big name associated with the police drama, which will go in Bollywood history as the first to be screened 24/7 in Mumbai, is that of producer Karan Johar. After the release of ‘Singham‘ and ‘Simmba‘, this is Shetty’s third movie in the police series and Devgn and Singh are reprising their roles. The film was earlier scheduled for a March 27 release.

That’s all for this time folks, see you all next month!!

Privacy & Cookies: This site uses cookies. By continuing to use this website, you agree to their use.
To find out more, including how to control cookies, see here: Cookie Policy
← ‘Britannicus’ – rising star director Atri Banerjee talks power, culture, melodrama, and Italian upbringing that helped with Roman play…
London Indian Film Festival (June 23-July 3) – ACV guide to films with ticket links… →