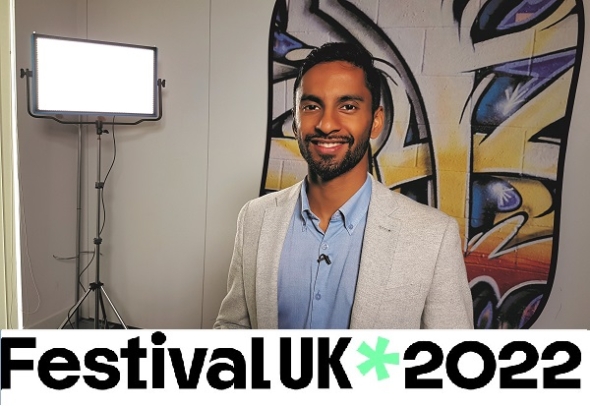 ARTISTS – your country needs you!

Join up with colleagues from other disciplines – science, technology, engineering and mathematics, (known as Steam in the jargon) and you could be part of a team that has up to £100,000 to develop an idea that aims to get the world talking!

That’s the message behind a campaign to get teams to put forward ideas for Festival UK 2022, as it will be known.

The deadline for teams of between three to eight people to enter is October 16 and www.asianculturevulture.com caught up with Maths teacher and media star Bobby Seagull to talk about how creatives can come together and show off the very best of Britain in terms of art, design, technology, creativity and other areas.

If you are successful in the first round, you can access a maximum of £100,000 to develop an idea that could receive further funds and then be showcased as one of just ten featured in Festival UK 2022.

The guidelines are not too prescriptive and at this stage organisers are looking for teams that have the necessary infrastructure and potential to make it to a shortlist of up to 30.

Described by some as a Festival of Brexit, and launched on September 9 by the government and Oliver Dowden, the culture secretary, Seagull told acv: “It’s showing Britain’s open and a way of trying to bring people from all kinds of sectors together to collaborate and come up with new ideas.”

Any one group or organisation based in the UK can apply and winning teams will also be selected to represent England, Wales, Scotland and Northern Ireland. There’s also a chance to find out more in a Zoom style question session tomorrow (Thursday, September 24) and Tuesday (September 29) – see the link below.*

“We’re looking for new talent,” said Seagull, who is a creative advisor to Festival UK 2022 and part of the panel which will sift through the ideas and submissions. A group of people from different expertise areas will help assess the applications.

“Historically, a lot of creative work comes from London, but we want to encourage people from everywhere to apply,” explained Seagull.

He also emphasised that he and others are looking for teams from deprived and under-represented groups.

Seagull grew up on a council estate in East London and won a scholarship to Eton and then went onto Cambridge to study Maths.

“Big organisations are welcome to apply but it’s also about finding talent outside of that – uncovering people from underrepresented groups. Talent is everywhere,” he stressed.

Seagull became a media star after appearing on ‘University Challenge’ and then fronted his own BBC TV programme with friend and programme rival Eric Monkman – in ‘Monkman & Seagull’s Genius Guide to Britain’.

Last year the pair made ‘Monkman and Seagull’s Genius Guide to The Age of Invention’ looking at a period of British scientific discoveries from 1750 to 1900. Seagull told acv he is optimistic about another TV series mixing history and popular science.

He continues to teach Maths at a secondary school in East London and first came into teaching after working in the City, qualifying as a chartered accountant and then educating and mentoring graduate accountant trainees.

“I found myself coming alive when conveying ideas to them and as a teacher you plant acorns and see them grow into trees. You have a part in creating the society of tomorrow.”

Seagull feels Festival UK 2022 is something that should appeal to young people who are looking to working with others they admire or aspire to have as colleagues.

“Sit down and open your phone contacts and think outside of the box – this is about developing new ideas and working with people.”

For the Festival UK 2022, every team has to have a mix of backgrounds, it can’t just be a team made up of just scientists or engineers.

“Each team has to have an arts person – they are critical to this,” Seagull stressed.

Dowden said the call-out for teams to participate in Festival UK 2022, “marks the start of an exciting and demanding competition to find the brightest and best innovators in the UK as we begin the countdown to Festival UK 2022.

“The winning applicants will receive £3 million to turn their ideas into spectacular, unforgettable realities.”

“It’s a fantastic opportunity to work with colleagues from different creative fields.

“A chance to discover new collaborators and celebrate under-represented talents.

“The aim is a national celebration of all our creativity. An unprecedented demonstration of the crucial, magical role that creativity can play to make life better.”

Initially up to 30 teams can be chosen in the first round and could receive up to £100,000 to develop their idea.

The BBC will be the lead broadcast partner and Festival UK 2022 will coincide with the Corporation’s celebration of its 100th anniversary and be a nationwide event.

Privacy & Cookies: This site uses cookies. By continuing to use this website, you agree to their use.
To find out more, including how to control cookies, see here: Cookie Policy
← UK Asian Film Festival 2021: ‘The Beatles and India’, ‘Ginsberg’s Karma’, ‘Nirvana Inn’, and ‘Ray of hope’ shorts, all shine a light on ideas, east-west exchange and well-being…
Disney Launchpad – six short films aimed to speak to a new generation – executives and director interview; and review, ‘American Eid’ →