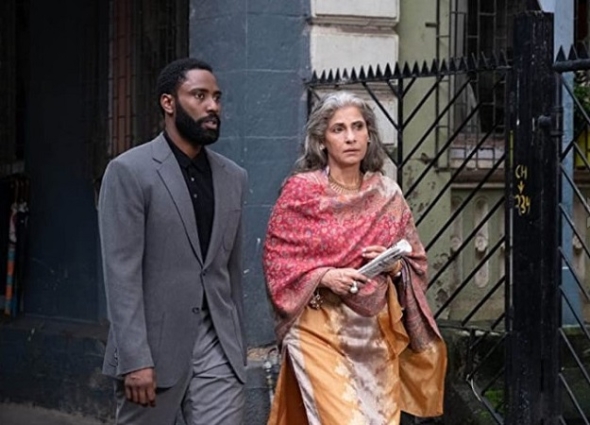 One of the all-time megastars of the 1980s and 1990s in Indian cinema, after a stunning debut at 16, talks about her first Hollywood experience…

IT IS HARD to believe you are talking to a Bollywood star who has made many, many iconic films and played a wide range of roles that continue to be celebrated.

“I was really, really nervous because I’ve been away (from films on and off) and I had all these insecurities and fears, I didn’t want to do it, I had this inner fear.

“I don’t know what happened – I thought I’d just give it a shot.”

This is Dimple Kapadia talking to www.asianculturevulture.com from Mumbai just over a week ago when she was available to talk about her role in Christopher Nolan’s ‘Tenet’.

A star at 16, in the 1973 romantic classic, ‘Bobby’, and then marriage to the legendary screen idol, Rajesh Khanna, she slipped out of the film world and raised two daughters.

Her marriage to Khanna didn’t really work out and there was a hiatus of 11 years before getting back to acting in 1984 and working through the 1990s.

One of her favourite roles was in ‘Lekin’ (1991) as ‘Reva’, a character that moved between the real and spirit world and was directed by the legendary lyricist and poet Gulzar.

She won a National Award also for best actress in ‘Rudaali’ (1993), which saw her play a professional mourner in a film set again in Rajasthan (as was ‘Lekin’), and directed by Kalpana Lajmi (1954-2018) – best known as an independent filmmaker.

This was a period when Kapadia appeared in what was dubbed ‘arthouse’ or ‘parallel cinema’ In India – as opposed to Bollywood or Hindi commerical films. She collected her fourth Filmfare Award for ‘Krantiveer’ (1994).

She came back to prominence more latterly with more Bollywood fare – but arguably with bite in – ‘Dil Chata Hai’ (2001) and then ‘Cocktail’ (2012), ‘Finding Fanny’ (2014) and most recently, ‘Angrezi Medium’ released earlier this year.

Her role in ‘Tenet’ does her justice.

She appears in the first segment as the plot is beginning to develop and we first see John David Washington, as the hero and known only as the ‘Protagonist’ and his professional partner, ‘Neil’ (Robert Pattinson) inviting themselves unnannounced to her Mumbai home for a chat.

The fim was released on IMAX and other cinemas in Nolan’s native Britain, at the tail end of August and is now widely available in theatres in the US and much of Europe. It has not been released in India because cinemas remain shut there because of the coronavirus pandemic.

The pair play a fabulously wealthy couple and it is ‘Priya’ (played by Kapadia) who holds an important piece of information, which will be revealed further into the film and moves the story on significantly.

Despite her many years as a household name, Kapadia has never appeared in a western production.

“It’s unbelievable and I never imagined it,” she told acv.

Kapadia brings a steely gravitas to her role and the film is best viewed from the emotional perspectives of each character – Priya seems on hero Washington’s side initially, then not, but quite possibly returns on side when they meet again outside of India. (See our review).

As in several Nolan films, the plot is immersed in the outer edges of science – in ‘Tenet’ – we are back to a form of time travel (‘Inception’ and ‘Interstellar’ also explore notions of Time).

Kapadia went along to the audition in Mumbai not thinking too much about it.

“I took my nephew (actor and emerging director Karan Kapadia) along who is also a great fan to get a picture (with Nolan) and I didn’t expect to be part of it.”

“It’s such a beautiful thing – he just liked what he saw and he knows exactly what he wants.

“It was an absolutely fantastic experience – he (Nolan) took such great care of me and helped to bring out the best.

“This is not an Indian caricature – you know how some Indians are portrayed – the accent and all that – but this isn’t like that.

“I had no idea about the role and when I read the script, it was ‘Wow’.”

She is very effective in the film and comes across as a female tycoon with a conscience.

“She’s a quietly powerful person. I had nothing in this (in shaping the character). It is all his own work. I just felt Priya was someone really strong and very ballsy, that’s all.”

“It’s a good part – that hasn’t always happened in the past (when Indians get cast in Hollywood). The reaction on social media has been very positive.”

She said Nolan has a substantial fan base in India it isn’t just Karan or a few like him, she herself speaks in glowing terms about the director.

She has a favourite Nolan film, ‘The Prestige’ (2006) – which is a battle between two late 19th century magicians, played by Hugh Jackman and Christian Bale and is adapted from a 1995 novel by Christopher Priest.

“I’ve seen it four times – that is what cinema is to me – he transports you to another world.

“He takes you on a journey. I love his work. I was so blessed to have this opportunity.

“You can’t deny his brilliance – I am a sucker for directors like that – when his films come out, I drool. He is a god of cinema to us all.”

She remembers the shoot for one of the most memorable scenes in the film – when Washington and Pattinson enter her high-rise apartment with a bungee-jump.

Stunt doubles did the real thing, but the two actors had to perform the entrance and departure leaps/jumps for 20 feet, instead of hundreds of feet, as in the film itself.

“It was shot against all the odds – the rains were crazy and it was windy, I don’t know how he pulled it off but the rains literally stopped for him,” Kapdia chuckled.

It sounds very much like ‘Tenet’ has whetted her professional appetite but the roles in commercial Hindi cinema for women are not terribly imaginative for the most part.

“I have always been picky and choosy, I’ve had gaps and I don’t pursue it as a professional, if something good comes up…

“I want to work but I don’t have plans for the future, I’ve never planned,” she re-iterated to acv.

Just as she is about to talk about her lockdown experience, the PR called time.

“There’s a slow roll-out for this film (globally), it’s totally worth it, we are all going through some strange times in our lives – go to the cinema, it’s a brilliant experience, you have to see it.”

Here’s hoping some directors will too…

‘Tenet’ is on general release in many countries

A slight amendment at the behest of Warner Bros has been made to the text to avoid any inadvertent spoilers (05.10.20)

Privacy & Cookies: This site uses cookies. By continuing to use this website, you agree to their use.
To find out more, including how to control cookies, see here: Cookie Policy
← ‘Indigo Soul’ – first songs from debut album to be unveiled at famous jazz venue for classically-trained vocalist Unnati Dasgutpa
‘Parey Love Hut’ – Two stars: Sheheryar Munawar and Maya Ali talk about dreams, making it and what they want in their next film… →