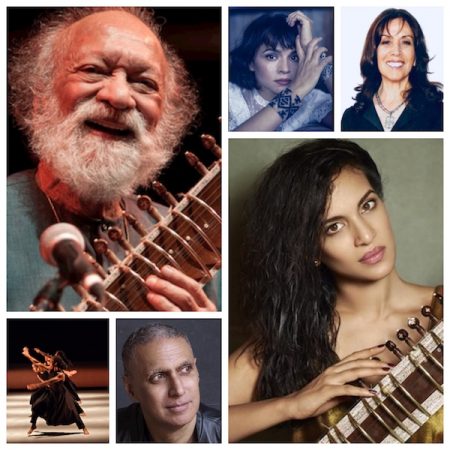 One of Britain’s most prominent arts spaces is to dedicate a whole year to marking the great icon’s contribution to world music.

Starting from April, the Southbank Centre, announced yesterday (November 11), that it will mark the 100th birth centenary of Ravi Shankar – officially inaugurating it with a concert in which Anoushka, half-sister pop and jazz siren, Norah Jones and composer Nitin Sawhney and Shankar family friend Olivia Harrison, will join in a tribute to the great maestro who crossed genres and generations in a life of music.

Shankar’s encounter with the Beatles in the 1960s, his long and indefatigable spirit and zest for playing the sitar and popularising Indian music (and culture) in the West and globally, remain unsurpassed and he is one of the few classical artists to be a household name almost anywhere on the planet. His friendship with George Harrison was long and profound and sparked a deep spiritual connection for the one-time Beatle band member.

This unique group thought to be brought together for the first time will share their love – and reprise a range – of Shankar’s work – from his classical Indian music repertoire through to his East-West collaborations, and songs from films. More star names are expected to be announced for this concert which will take place on April 7, marking Ravi Shankar’s birth anniversary.

Earlier in the year on January 15 next year, ‘Sukanya’ the only operatic work Shankar composed will return to the Southbank Centre – after its London premiere there in 2017. The work will see the London Philharmonic Orchestra provide the music, while Susannah Hurrell will play the lead part; David Murphy, Shankar’s close friend completed the opera after the maestro’s passing in 2012, with the help of Anoushka and will again conduct. Suba Das, the current theatre group High Tide artistic director, take the helm for the production with Gauri Diwakar providing the choreography.

The Philharmonic Orchestra will be joined by Zubin Mehta and Anoushka for a November concert in addition.

Anoushka who exclusively spoke to us about her score for the 1928 silent classic, ‘Shiraz: A Romance of India’ has chosen a selection of films which represents her father’s collaborations with filmmakers – and these will screen at the BFI Southbank next year.

She also joins the London Philharmonic for her father’s ‘Symphony’ on April 22 – 10 years after the two performed it at the Southbank Centre.

Among the highlights for the Ravi Shankar centenary celebration are

BFI will screen films selected by Anoushka and representing her father’s work for the big screen.

An exhibition from April 2020 featuring significant objects belonging to Ravi Shankar and on display at the Royal Festival Hall Archive Studio.

A specially commissioned film to be screened in the Southbank’s public spaces, featuring interviews with Shankar and those inspired by him.

Darbar 2020 to feature the work of leading contemporary Sitar players

Anoushka Shankar said: “I feel deeply grateful to be able to begin celebrations of my late father’s centenary year with a series of special events at London’s Southbank Centre, before we continue the celebrations in various cities worldwide.

“It feels ambitious to the point of being unrealistic, to somehow put together anything that can fully showcase all the varied aspects of his incredible career, creativity, musicianship and humanity. However with the multiplicity of events that Southbank Centre is putting on, we may stand a chance!”

Widow Sukanya Shankar said the centenary will spark some special thoughts and memories.

“The centenary celebrations for my husband by the Southbank Centre will bring back some of the magic I have experienced at all the concerts of this amazing musician!”

Akram Khan said that Shankar’s influence had marked him deeply and he was delighted to be reviving ‘Kaash’ for such a special celebration.

He said: “To bring back ‘Kaash’ – which was my first full-length ensemble work that premiered at Southbank Centre so many years ago – not only feels like a full circle, but feels deeply connected to my admiration and respect that I have for Pandit-Ji (Ravi Shankar), who in hindsight, was the early architect of my emotions in the dance I dance.”

Gillian Moore CBE, director of the music at the Southbank Centre said that the venue had an intimate and close connection to the artist and that he stood for something much larger than the music he played and inspired.

“From his debut Royal Festival Hall performance in 1958 to the premiere of ‘Symphony’ in 2010, Ravi Shankar shared the power and energy of his musicianship with countless listeners here at Southbank Centre. It is a huge honour to present Shankar 100, a year celebrating this great artist and human being and his incomparable contribution to the world,” she declared.

Privacy & Cookies: This site uses cookies. By continuing to use this website, you agree to their use.
To find out more, including how to control cookies, see here: Cookie Policy
← ‘Cake’ film (review) – Caring for elderly parents, love across a religious divide and feudalism and modernity…
UK Asian Film Festival 2018: It’s a wrap as stars turn out for feel-good closing film ‘Boogie Man’ and festival awards presented… →