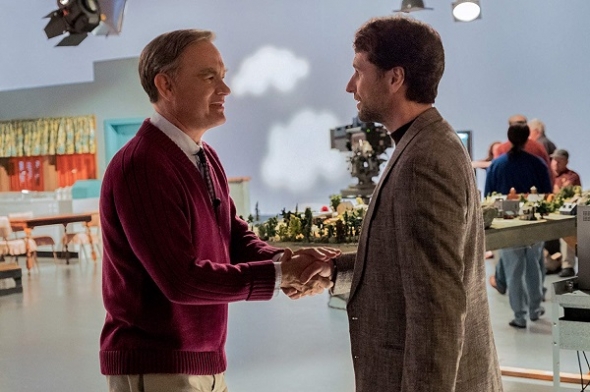 Your faith in the human race will be restored…

THIS is a story based on the real life of children’s presenter, Fred Rogers played with great sensitivity, fastidiousness and insight by actor, Tom Hanks.

If you can – ‘talk about it, you can manage it’ – is one of his pieces of advice.

Investigative journalist Lloyd Vogel (Matthew Rhys) is sent to interview him for a forthcoming issue on heroes being put together by Esquire magazine.

Initially, he thinks the task is beneath him, but gradually the interviewer is the one who is interviewed – roles swap and Logan learns about forgiveness, fatherhood, and family.

Vogel has his own issues to work out with his father and the journalist and the TV presenter end up striking an unlikely friendship.

Hanks captivates you as the cardigan wearing mister nice guy, who is so genuine that you don’t believe people like that exist.

The real Fred Rogers was an American TV personality, musician, puppeteer who created and presented a children’s pre-school television series, ‘Mister Roger’s Neighborhood‘ on American television from 1968 to 2001.

Hanks is brilliant as Rogers who is still working at nurturing his inner child, and through his television show, talks to children about difficult things like being ill, death, divorce.

He is also acutely self reflective and manages his own anger and frustration by thumping the keyboard of his piano, swimming and writing letters. (We can’t say it often enough and the Oscar nomination is well earned).

Based on an article ‘Can You Say…Hero?‘ by Tom Junot and directed by Marielle Heller, the film is about his real life friendship with Rogers and about goodness and humanity.

I especially loved the sequence on the subway when everyone bursts into spontaneous song; ‘Won’t you be my neighbor?‘ and this film seems like a contemporary ‘It’s a Wonderful Life‘.

Acv caught the film at London Film Festival 2019. Go and see it to have your faith affirmed in people.

‘A beautiful day in the neighborhoood’ is on general release…

A beautiful day in the neighbourhoodOscar

Privacy & Cookies: This site uses cookies. By continuing to use this website, you agree to their use.
To find out more, including how to control cookies, see here: Cookie Policy
← Edinburgh Fringe Festival closes today – our video interviews and films on one page…
‘Parwaaz Hai Junoon’ – Doing it for your country and tackling prejudices about Pakistan in the West (London launch) →