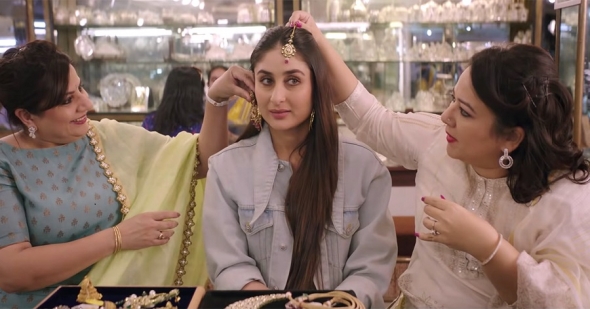 An all women film by director Shashanka Ghosh is a triumph, mostly and will leave you uplifted…

THIS much awaited film revolves around four friends catching up for the wedding preparations of Kalindi Puri (Kareena Kapoor) set mainly in Delhi/Dili. The opening credits mention Parathawali galli.

Sonam Kapoor continues in a similar naïve, but principled and endearing role as seen in ‘Aisha’(2010) and ‘Khubsoorat’ (2014) – and there are certain aspects of the film that must have paralleled with her life as a recent bride: the planning, the tamasha, the rigamaroles, the punga, all sweetly portrayed in rollicking, twinkling Punjabi grandeur.

It’s very easy on the eye and hard not to notice the compelling attire – there’s dazzling couture, incredible make-up, and magnificent jewellery.

This is Kareena Kapoor’s first film since her son being born and she radiates a very natural beauty.

There are occasions though when Kareena’s facial expressions slightly grate – but the other characters interwoven storylines rapidly distract you.

The music keeps you enthralled too – ‘Bhangra Ta Sadja’ is the ubiquitous up-tempo Punjabi track with the Veeres/bros at the forefront. ‘Tareefan’, credited to Badshah, is catchy and melodious.

At the core of the film is four women’s relationships and friendships, with every aspect lovingly and humorously shared – men are essentially secondary protagonists.

The groom, Rishab Malhotra (Sumeet Vyas), is an elegant mature character for a very modern film which is refreshing – to the “dude yaar can’t commit”, genre that has been so prevalent of late.

The film cleverly weaves different stories and assumptions are made and then discarded.

I felt the usage of expletives and adult material were repetitive and slightly overdone – and exaggerated; and really unnecessary in a film which has a lot besides going for it.

‘Veere di Wedding’ is a new genre and attitude of film emerging from India – and importantly appealing to a specific, aspirational metropolitan demographic.

The good natured dil of the film coupled with strong cinematography is as good as anything you might find in other productions such as ‘Tiger Zinda Hai’, ‘Race 3’ and ‘Befikre’.

Unsurprisingly, the film did not escape a ban in Pakistan. Its censors described the film’s dialogues as ‘vulgar’.

Indian women (born and raised there) enjoyed the racier language and found the more ribald scenes just hilarious – it is quite a departure for the stereotypical image of the demure, submissive Indian woman.

To those not familiar with Indian cinema or typical Bollywood fare, this is a cute (exotic) chick flick (though the filmmakers are keen for it not to be billed as such), with strong nods to the ‘Sex and the City’ generation.

This isn’t in the style of a multi-generational comedy caper and something family friendly, such as ‘Mubakaran’, which is also centred around a wedding, but something more assertive, bold and original and yeah, girls rule ok?

Privacy & Cookies: This site uses cookies. By continuing to use this website, you agree to their use.
To find out more, including how to control cookies, see here: Cookie Policy
← UK Asian Film Festival 2019: Struggle not submission – Southall Black Sisters 40 years and drawing the dots between then and now…
UK Asian Film Festival 2019: ‘Ek Asha’ (review) – transgender as it is… →