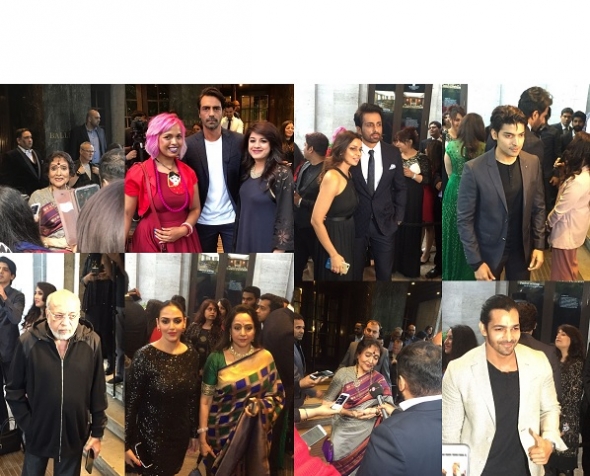 STARDUST maybe one of the world’s biggest Bollywood entertainment magazines but for the Stardust Achievers Awards the tables were turned, as it was the fans in the limelight, not the stars.

They did however come out to celebrate the achievements of British Indians – including entrepreneurs and philanthropists, at a grand award ceremony that took place yesterday (Friday June 1) at the Grosvenor House Hotel in Mayfair, London.

In attendance were the leading cast of forthcoming movie Paltan, directed by JP. Dutta, Arjun Rampal, Sonu Sood, Luv Sunha, and Gurmeet Choudhary, and Harshvardhan Rane who took to the stage to present award-winners with their trophies.

They included Arun Luthra, Director of catering company Ragamama Ragasaan and Aashni from fashion boutique Aashni & Co. There was also a special award for actress Ileana D’Cruz who picked up Rising Star in the World of Glamour.

The evening also recognised the achievements of Dream Girl Hema Malini, with the event doubling up as a launch for her biography, ‘Beyond The Dream Girl’. Hema was joined at the awards by her daughter Esha Deol.

On stage she spoke affectionately about legendary actress Vyjayanthimala who too was in attendance. The 81-year old received the biggest accolade of the night, the Lifetime Contribution to Cinema award and the biggest applause.

We caught up with some of the stars in attendance to ask them what achievement means to them and there’s some rather fine answers, including one who classed their ACV interview as one of theirs…. nice! 😉

Now that’s an honour! Thank you @harsha_actor who told us he considers an interview with ACV one of his achievements… #StardustAchieversAwards @foxstarhindi #bollywood #HarshvardhanRane pic.twitter.com/nBNnXGxKn8

You know him as a Bollywood villain but he still just wants to make his parents proud @SonuSood chatted to us on the #StardustAchieversAwards red carpet @Stardust_Magna #bollywood #PaltanInLondon pic.twitter.com/9spkXe0gq6