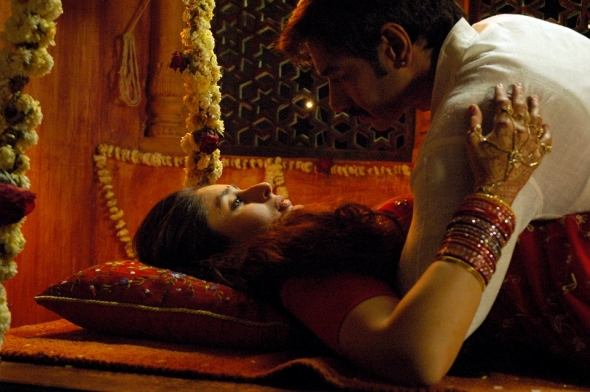 WHO’S been the most artful Bollywood writer to date?

Well, you have to go back in time. And forget anyone Indian.

In fact, there was an English chap called William Shakespeare, a few centuries back, who knew a thing or two about writing cracking tales and putting them on for packed theatres.

It’s a surprise not more Indian filmmakers have dipped into or dabbled with, or even confronted, Shakespeare – at least consciously so – and who have not been afraid to say so.

The major exception to this recently has been Vishal Bhardwaj, who comes to London this week to receive a special prize, not just for two outstanding adaptations of Shakespeare’s work in the films, ‘Maqbool’ (2003) and ‘Omkara’ (2006), but also for his considerable body of work as a music composer.

On Sunday (September 1) at the British Film Institute (BFI) South Bank in London, there will be a special screening of ‘Omkara’ with Bhardwaj in attendance, as will be his wife, Rekha, a top singer, and the filmmaker will receive an ‘Excellence in Cinema’ award from Lalit Mohan Joshi, the director of the South Asia Cinema Foundation (SACF), which supports and promotes the best non ‘Bollywood’ films from the sub-continent.

“I do not agree with the term, Bollywood,” revealed Joshi to www.asianculturevulture.com. “When we talk about Bollywood, we are talking about a specific type of cinema and yet Indian cinema is so vast and diverse. Indian cinema is more than Bollywood.”

Naturally, understood; but the problem, so much of the time and Joshi also stated it, is that it sets up a certain form of expectation, even dare we say it, prejudice among those who confuse Bollywood with Indian cinema in general.

Indian films are interminably long, they have song and dance sequences and are about sweet, but faintly absurd, romances.

Yes, some Bollywood films are just this, but it would be wrong to characterise all cinematic output from India – including some Bollywood productions – as simply conforming to this jaunty formula.

“I realised in this country (the UK), the perception of Indian cinema is shortsighted, myopic,” declared Joshi. “There is serious Indian cinema in other languages and even in Mumbai (the language of Bollywood) there are serious films being made.”

Yet mostly, it is the spirit of Bollywood that pervades (or infects, depending on your viewpoint) the rest of the industry and drives Sandalwood (films from the south) and its other regional equivalents.

What is most striking about a figure such as Bhardwaj is that he crosses the divide and is something of a bridge between the two.

In ‘Omkara’, there is a veritable cast of Bollywood A-listers, such as Saif Ali Khan and his (now) wife, Kareena Kapoor. Both films, ‘Maqbool’, an adaptation of ‘Macbeth’, and ‘Omkara’, a reworking of ‘Othello’, are transplanted into the Indian context seamlessly.

“These are two very seminal works,” explained Joshi. “He is a really significant filmmaker from the new generation. We thought we should recognise a filmmaker who was very important for commercial film and also serious cinema, and Vishwal Bhardwaj fits the bill to a T.”

Over the years, the SACF, have presented awards to such figures as Adoor Gopalakrishnan (http://asianculturevulture.com/portfolios/director-adoor-gopalakrishnan-delivers-home-truths/), and Shyam Benegal, who are stalwarts of the industry and recognised in India for their non-Bollywood output.

“Bhardwaj just happens to be popular but we are not looking at that aspect – he is so innovative, and really stands apart. He is also unique in the sense that he is also a music composer – he does almost everything, he is extremely creative.”

Bhardwaj began his working life as a singer and worked with one of the Indian film industry’s biggest music names, Gulzar, before contributing to productions himself.  Bhardwaj’s work for others led him into the arena of filmmaking, initially with a children’s film, ‘Makdee’.

But it was Maqbool which really caused ripples and suggested a very serious talent had emerged.

“His cinema is very deep, and very cinematic but it is also commercially successful.

“‘Maqbool’ was a real breakthrough – the way he constructed the whole plot, it was so thrilling and frightening – it’s a mafia type film,” explained Joshi.

In ‘Omkara’, he went further and it was able to reach out to an even larger audience, because of the stars he was able to cast in it. ‘Maqbool’ had recognised actors in Irrfan Khan, Tabu and Naseeruddin Shah, but was not in the same order of constellations when it came to Bollywood big hitters.

“He breaks boundaries,” said Joshi. “’Omkara’ doesn’t look like ‘Othello’. It looks like an Indian story with an Indian style. It’s a real political thriller.”

Integral to Bhardwaj’s auteur-style of filmmaking is the way the music blends and bleeds into the narrative and again Joshi explained it comes from Bhardwaj’s understanding and merging of two powerful media, images and sound.

“He does so brilliantly, because basically he is a music composer who has a strong deep rooted learning in classical music, but he is equally adept with modern music and fuses them.”

In his last film, released earlier this year, ‘Matru Ki Bijlee Ka Mandola’, he tackles the Indian land mafia, but as a comedy.

His style of filmmaking is accessible and it has been part of his commercial success to marry ideas about Indian society and culture in the form of popular entertainment.

“He does it in a subtle way, the undercurrents of politics and crime, his films are very real – they are about reality.”

Bhardwaj’s wife Rekha will provide added glamour to the showing on Sunday.

“She’s a famous singer in her own right and if she was to come on her own there would be a lot of publicity for that alone.”

*Omkara’s screening is part of the celebrations of a 100 years of Indian cinema at the BFI, South Bank, London with Vishal and Rekha Bhardwaj in attendance, 2pm, Sunday, September 1.