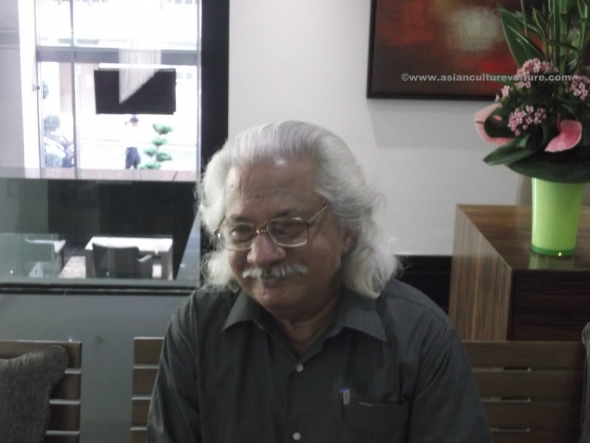 Better films are coming out of India

UNNI is irascible, lazy, selfish, completely self-centred and quite a piece.

But as a central character he makes for great cinema.

Adoor Gopalakrishnan (pictured above) made ‘Elippathayam’ (‘Rat Trap’) which featured at the London Indian Film Festival late last month, and centres around this unsmiling patriarch, who has two younger sisters and a crumbling tharavad (family house) and estate to maintain. Just like a rat he finds in the house, he is trapped by his own self-importance and delusions.

Back in 1982, this film won the British Film Institute’s (BFI) Sutherland Trophy and Adoor, became only the second Indian, after Satyajit Ray, to win such an accolade.

Today, the 72-year-old is among the most feted, but is perhaps nowhere near as well-known as Ray in the West, despite being conferred with India’s highest civilian award, Padma Vibhushan and many foreign film prizes.

Just days before the July showing of ‘Rat Trap’, Adoor shot the breeze with critic Derek Malcolm about his long career at a BFI masterclass at the South Bank as part of the festival.

Adoor spoke to www.asianculturevulture.com and shared his thoughts on the festival, filmmaking and his family background, all with charm and insight.

The likeable, easy-going director is hugely encouraged by the recent spate of Indian independent productions which can more readily connect with western audiences than your usual Bollywood fare.

“Something interesting is happening in Bombay, (called Mumbai now, and the home of the industry),” said the director whose own films focus on Kerala, the south western state in India, where he was born, and still lives.

“This is my feeling from a distance, it’s an outsider’s view –  Bombay did not have much greed, or ambition before, they were just very happy with their success, as of late they have started becoming ambitious, which is a very good thing and that allows some space for people who want to do different things.”

The London Indian Film Festival with its dozen or so plus productions, gives a platform to that very important impulse.

“It’s a remarkable change. It’s not there in the regions – they are doomed – they are still under the influence of the old Bollywood,” Adoor pronounced.

By the old Bollywood, he means from the 1980s and onwards – a period when most serious commentators agree that Indian filmmaking largely sold its soul, became an industry and didn’t want to look back.

This type of filmmaking with its emphasis on song and dance and OTT acting remains the prevailing style everywhere in India and Adoor sees its triumph erode a constituency he and others want to connect with and cultivate.

“In Kerala, the independent strand is very nominal. We have about 20 TV channels in Kerala, not even one of them will show anything above average, they just feature such rubbish. The channels have done such damage. They propagate all the bad stuff.”

No doubt, the channels would say they need ratings and look for the biggest common denominators. But with a little thought, they can take risks and open up new audiences, it’s happening in India’s metro cities where independent cinema is getting a run and Kerala is well placed – it has one of the country’s most educated populations.

Yet Adoor’s no doom merchant and despite ‘Rat Trap’ being something of an indictment of a particular type of person – okay, man – who refuses to engage with the world, preferring to live in his own and with dire consequences,  Adoor doesn’t seek to condemn the wider world.

“All my films are optimistic. I am annoyed, but I don’t think we we’re heading towards some tragedy or anything, no. The system has a way of correcting itself.”

What annoys him now is what he is currently writing about.

“Corruption and the degradation of values, that really bothers me and has done for a long time.”

His last film, ‘Oru Pennum Randaanum’ (‘A Climate for Crime’) has two cops who frame an innocent man to enjoy the spoils of their own loot.

“That did not do so well,” he conceded. “But Naala Pennugal (Four Women, 2007) was both a critical and commercial success. It was accepted everywhere at all festivals and was sold out.”

Adoor shows great sympathy for female characters and like Ray writes them with heart, feeling and intelligence. He said it was this that made the film, which charts the fate of four very different women occupying particular segments of society that made it connect with so many.

“Women all over the world expressed their appreciation,” he said proudly.

What Adoor does is make films that are about real issues and does them with integrity and purpose as any artist does.

But when ACV described him as a chronicler, he disputed the assertion.

“I am not chronicling (events). I don’t do that, with a film I can probe. I don’t start with the answer – I keep identifying and discovering things and want the audience on my terms.”

At the BFI masterclass, he revealed that he does not allow actors to practice their lines.

“I give them the script before the scene,” he said drolly.

Sometimes he goes as far as outlining the general narrative but this is far from common and is only the privilege of the leads.

Whatever you think of that idiosyncratic way of working, it produces great results. The performances are natural in ‘Rat Trap’ and have a real force.

Adoor’s early life was dominated by the theatre, writing and acting, and putting on performances at his home family home in Thiruvanthapuram (Trivandrum).

“I came to cinema almost by accident, in childhood my first love was theatre. I started writing plays at the age of eight.”

“We (as a family) supported them and with Kathakali, you would have at least 25-30 people at least.”

Even when he was youngster, there was certain expectations from the audience, which was his extended family.

“It wasn’t child’s play, they took us very seriously. It was a very interesting period of my life.”

He was also strongly academic and went to university to study economics and public administration in Madurai, Tamil Nadu state. Theatre was still something of a passion, and he continued to read voraciously and write.

After graduating he got a job as a statistical investigator with the government. It wasn’t his calling.

“I didn’t want to be that all my life but to escape that I had to go for further studies.”

The conversion to film came slowly at first after he responded to an advert for students to join the Film Institute of India, in Pune, and still one of the most prestigious schools of its kind. He took up a course in screenwriting and advanced direction, enticed by the writing aspect primarily.

“For the first year I still couldn’t detach myself from theatre – all the news plays were coming out. But slowly I started to getting into films.”

It was in 1965 that he returned to Kerala but there was no money to make films and so embarked on a series of commissions.

In 1972, he released ‘Swayamvaram’ (‘One’s own choice’), which won a clutch of national awards and was the clear arrival of a major new talent.

He was able to make it through the cooperative movement he had set up which allowed filmmakers like himself to raise finance, make films and distribute them as a collective.

“We were preparing an audience for a better type of cinema.”

Adoor is also a prolific writer, and has produced many books in Malayalam about cinema and was among the first to ever do so and wrote much about world cinema.

Very much a student and practitioner, he countered any idea that he was ideologically opposed to popular entertainment, which often and still does feature singing and dancing.

“I am not against that, and people ask me why are you not using that? There are many things I am not using – look for what I am (using)…”

His films are perhaps an ode to a different age but remain powerful and memorable in their depiction of a society in flux, and the changes it brings to individuals.

BFI, you really should have a season of his films and introduce a new generation to the world of Adoor Gopalakrishnan and thanks LIFF for spotlighting such an Indian filmmaker whose work will stand the test of time, for sure.