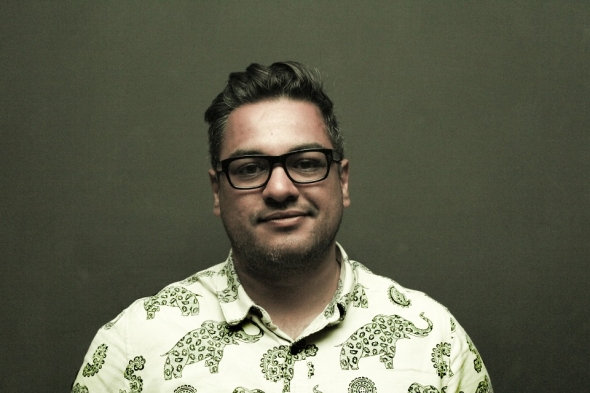 TOUCHING  and memorable for the way it deals with food, family and grief, novelist Nikesh Shukla’s (pictured) specially published short story, ‘The Time Machine’, is also a cry for certain traditions to be preserved.

If you’re Asian, you won’t need any telling how much food matters in households, old and new.

The author who burst onto the literary scene with his first novel ‘Coconut Unlimited’ in 2010 has produced this special short title, forgoing any of his royalties for the Roy Castle Lung Foundation, and it’s a funny, poignant ode to his late mother, who succumbed to the condition, not long after the publication of that debut novel.

“It was cathartic,” he tells www.asianculturevulture.com about writing ‘The Time Machine’ which came out on August 15. “That’s why it’s a fictionalised version of what happened – half-fact, half-fiction.”

In the story, the central character, ‘Ashok’, tries to reprise his departed mother’s dishes with the help of concerned aunties.

It’s his way of coming to terms with his grief, learning to cook for the first time and recreating a time when home, meant dad…and mum – not his wife and responsibilities.

“I wanted to write about food but not in a technical way, not like a celebrity chef or anything. I am not a foodie (in that sense). What I love about food is when it is home cooked,” Nikesh explained.

The tale was also inspired by a conversation he had with an Indian restaurateur in Bristol about khichdi (rice and lentils).

“We were having a real in depth conversation about it and she had the same name as my mum and I had a very powerful feeling at that moment and I thought I have to write about it.”

What he’s done in ‘Time Machine’ is to make the end product of the food itself almost incidental to the process, which is filled with delicate, bittersweet reminiscences and ruminations on how traditions are passed from one generation to another.

Each mini chapter opens with a recipe and a description of how Ashok, the main character, executes it.

It’s common for most Asian family cooks to prepare meals by instinct or ‘practice’ as one of Nikesh’s characters states, not by following a recipe book or cooking with precise quantities.

“The recipes are versions of how I like to cook,” explained Nikesh. “My mum’s were never written down.”

It’s a reminder both in the story and at a wider level of how things change and traditions sometimes fall by the wayside, not always for the better.

“The majority of our interaction as a family was in the kitchen,” he revealed.

It was where mother and son, he intimates, bonded and began to understand each other.

Shukla is now working on completing a second novel, which covers different territory to his coming of age tale in ‘Coconut Unlimited’. Called, ‘Meatspace’, it has a very contemporary theme at the heart of it.

“It’s about what the internet doing is to us. This is a second novel and I don’t want to get it wrong.”

He plays down its ‘Asianness’, stressing there are other elements which are more important to this book and states almost defiantly: “I just want to write books – and the books be about whoever and it not be an issue. Some people are just brown.”

We hear you, judge a book on its contents and not by the colour of its author and don’t expect an Asian writer to be banging on about Asian themes simply because he or she is.

‘The Time Machine’ is itself like a Madeline cake, evocative, sweet, rich but small enough for easy and quick digestion and with Shukla’s fees going to charity, it’s a very worthy and wise investment at just a pound. Yes, just one pound.

It is produced as part of ‘The Singles Club’ series produced by independent publishers, Galley Beggar Press.