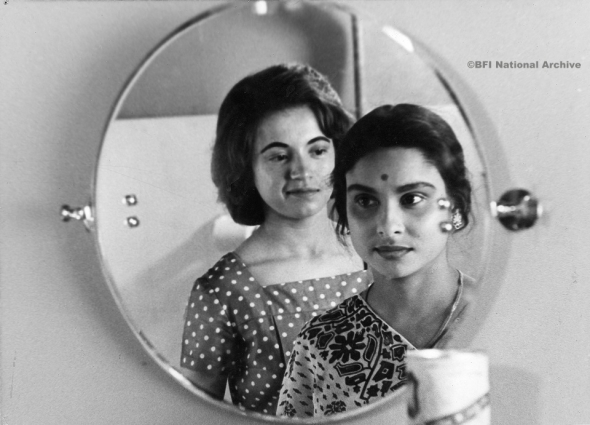 THE GODFATHER of Indian cinema.

Note: not of Bollywood, but of the independent, non-song and dance variety.

For those of you who don’t know too much about the films of Satyajit Ray, and those already enamoured, the British Film Institute (BFI) on the South Bank in London is about to help you out. Big time.

From tomorrow (August 15), there is a two-month long retrospective of his work and if you don’t go to at least one film – then you will be missing out.

It all starts with an introduction today (August 14) by Dr Manishita Dass, lecturer in World Cinema at Royal Holloway, and continues with screenings and a series of special events, including a showing with an icon of Indian cinema at the time and one of Ray’s own finds, Sharmila Tagore, next month.

Don’t take our word for it – but from someone who’s a filmmaker herself and grew up in the city Ray immortalised on screen for the world, Kolkata.

Sangeeta Datta told www.asianculturevulture.com : “I think the entire season is a fantastic treat. You are going to see a major director’s work almost in chronological sequence – there are some  27 films and many of them have been digitally restored.”

The Academy of Motion Picture Arts and Sciences have improved the originals with great craft and skill. Believe us.

‘The Big City’ (‘Mahanagar’), a film made in 1963 looks as though it could have been released yesterday. It has a distinct, telling definition, rendering the black and white picture with a sumptuous beauty and elegance. A review of ‘The Big City is here http://asianculturevulture.com/portfolios/the-big-city-old-film-modern-values/

“They are new prints,” explained Datta. “They are so crisp and show off Satyajit Ray’s early cinematographer Subrata Mitra in all his brilliance.”

What is it that makes Ray such an admired filmmaker and continues to draw respect and love from such hallowed contemporaries as Martin Scorsese or the late Akira Kurosawa?

Datta explained: “You have these very detailed, psychologically perceptive stories. They are small human stories, where we find these very endearing characters and want to connect with them, and we get a larger understanding of not just a society, or a region, like Bengal, but humanity itself.”

From the moment Ray made his astonishing debut with ‘Pather Panchali’ in 1955 to ‘The Stranger’ in 1991, he chronicled the changing times in ways that were both accessible and acute.

“When I look back at his career,” reflected Datta. “He was able to find stories which were about transition and  about the point of conflict – between the traditional and the modern, between rural life which was dying out and life in the city.”

He never seemed to lose this human touch and his ability to chart people’s individual fates amid much larger forces at work, Datta suggested.

“In the 1970s there was his Kolkata trilogy, it was against the backdrop of political unrest and colonial life dying out and a different corrupt system coming in and how all that starts impacting family relationships,” said Datta who made the film, ‘Life Goes on’ (with Tagore and her daughter Soha Ali Khan) and was assistant director on ‘Brick Lane’.

Ray’s legacy in India remains immense, but perhaps is only recognised by directors who work outside of the Bollywood system now.

He bequeathed the Satyajit Ray Film Institute in Kolkata, which continues to train directors, editors and other technicians and along with the Film Institute of India in Pune, nurture talent directed to what is known in some circles as ‘world cinema’.

Directors such as the late Rituparno Ghosh, who died this year, and Dibaker Banerjee have inherited Ray’s mantle.

“They have an understanding of the tradition of good cinema, rather than song and dance.”

In recent times, the independent sector in India has begun to find its voice and a new wave of Indian filmmakers have begun to emerge.

Ray was a fierce critic of Bollywood and the antipathy was largely mutual, though as the years have passed, it could be said the disdain in which he was held in some Bollywood quarters, has mellowed.

“Ray would be very excited by these new films,” said Datta. “It does seem to be gradually shifting and looking different. There are individual directors such as Banerjee and Anurag Kashyap. Ray was a critic of the star system and wanted to use non-actors.

“He’d be thrilled by these films, while being equally dismissive of Bollywood.”

*Our friends at the BFI Southbank are also offering readers of Asian Culture Vulture a special discount rate to all films (£1.50 off) in the Satyajit Ray film season this summer. To enjoy this offer simply quote ACV when booking tickets on line, in person or over the phone (020 7928 3232).

Privacy & Cookies: This site uses cookies. By continuing to use this website, you agree to their use.
To find out more, including how to control cookies, see here: Cookie Policy
← Baftas 2021: New voices emerging as winners take spotlight and shift agendas; ‘snobby’ remark has a million plus views…
Baftas 2021 – A weekend affair: Opening night – Noel Clarke award; and Bafta award presenters tomorrow, including Priyanka Chopra Jonas; brief short film preview … →