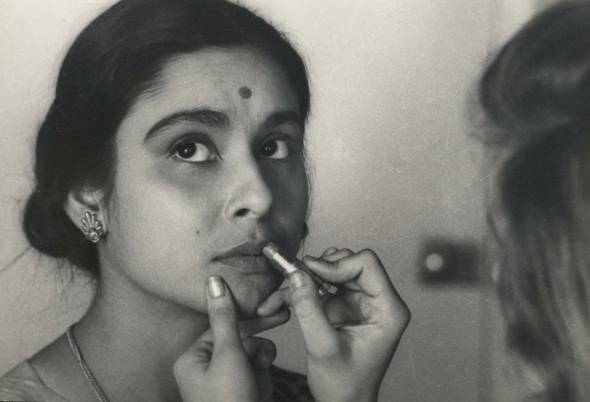 That revolution (of working women) still reverberates powerfully in India today – with a staunchly patriarchal society under necessary attack from the forces of modernism and equality.

Women in the work place remains a very hot topic – with many traditionalists in India (and not just there) maintaining that a woman’s place is in the home, tending to her home, husband, children and wider family (as with the concept of extended family living).  All right if you can afford it, but many can’t.

Some blame the violence against women on precisely this breakdown of traditional relations, with men feeling threatened and emasculated by women’s changing roles.

All this is beautifully exposed by Ray, who well understood the traditional arguments about the dutiful Indian wife and articulates them forcefully through his traditional characters.

But it is around Arati (Madhabi Mukherjee) that the film is centred and what gives ‘The Big City’ its hugely seductive power and dare we say it,  its romantic essense.

Mukherjee, who was to later reprise the central role in Ray’s much admired ‘Charulata’, a year later, is a tour de force and a revelation.

Her performance, subtle and majestic, surely ranks as one of the great performances in Indian cinema (and reminds one in a slightly left field way of Bette Davis in a very different film, but which also has an underlying sympathy for strong women, ‘All About Eve’).

Arati finds herself married to loving husband, and he is the sole breadwinner who has to support an elderly and ailing father, an ageing mother, a sprightly sister and the couple’s own young son.

As a clerk in a new bank, he doesn’t earn enough to maintain a comfortable existence. His father, a penniless but proud teacher, remains somewhat embittered by the progress of his former charges, who are stepping forth into independent India and earning decent money.

This forms the basis of an important sub-plot and a powerful metaphor for the difference between the old generation (perhaps stifled by colonialism) and a new generation free and confident (from such constraints).

To improve the family’s financial position, Aarti gets herself a job as a saleswomen with a knitting machine company. She proves to be a huge success, with her polite and respectful delivery, and ever charming smile.

At first, her husband, Subrata Mazumdar (played endearingly by Anil Chatterjee) is delighted, but the family is fractured and he begins to feel threatened by his wife’s flourishing independence and self-belief.

His own father is disgusted, his mother wonders whether Aarti is giving her son and grandson enough love and attention (a continuing game of guilt played out by some families).

Only Subrata’s sister is a positive voice, perhaps persuaded by a new sari Aarti has purchased for her with her new salary.

Despite these potent misgivings,  Aarti holds her ground, and the world of work opens her up  to a new social group, made up of other working women and she forms a solid friendship with spirited and feisty Anglo-Indian colleague Edith (Vicky Redwood), who introduces Aarti to the delights of lipstick.

Their friendship is put to the ultimate test by the pair’s tough talking and superficially fair boss, Himangsu Mukherjee (Haradhan Banerjee) –  and Aarti is also challenged by own husband.

Throughout the film, Aarti’s loyalties are tested (a common experience for most women), but she always shows herself to be considerate and respectful to others, without necessarily compromising her own values and beliefs.

‘The Big City’ ends with something of a romantic flourish and perhaps Ray was portraying the perfect Indian woman/mother/wife/daughter-in-law through Aarti.

*Our friends at the BFI Southbank are also offering readers of Asian Culture Vulture a special discount rate to all films (£1.50 off) in the Satyajit Ray film season this summer. To enjoy this offer simply quote ACV when booking tickets on line, in person or over the phone (020 7928 3232).

Privacy & Cookies: This site uses cookies. By continuing to use this website, you agree to their use.
To find out more, including how to control cookies, see here: Cookie Policy
← ACV Lockdown Listings – Riz Ahmed with Manchester International Festival Live and other cultural bites to keep you stimulated!
Bollywood and music megastars appear in special ‘I for India’ fundraiser… →