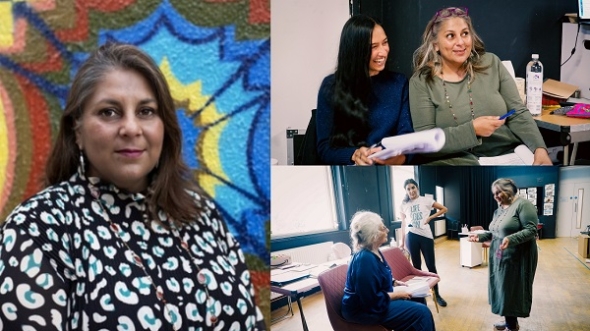 As the curtain rises on this creative’s debut production as artistic director of Tamasha, acv profiles her theatre journey to date…

POOJA GHAI is directing ‘Lotus Beauty’, following the lives of five multi-generational women set in a beauty salon in Southall and written by Satinder Chohan.

The show will have its world premiere at Hampstead Theatre Downstairs with press night on Thursday, May 19.

Ghai is an award-winning director, mentor and advocate for change in the creative sector.

She was appointed artistic director of Tamasha Theatre Company in November 2021, while the theatre sector was still dealing with the impact of the pandemic.

It is fitting that she is back at Tamasha, because as she tells it, when she came out of drama school, Kristine Landon-Smith and Sudha Bhuchar – the original artistic team and founders were putting on a lot of work that resonated with her.

“When I came out of drama school, it was the 1990s, and there was a lot more work coming into play.

“The amazing thing about Tamasha was that it was doing mid-scale shows, it was doing our stories and all of a sudden you were seeing our stories on mid-scale stages at Lyric Hammersmith, Theatre Royal Stratford East and Hampstead, which was a huge revelation to me because I hadn’t seen that before. I came at the time where I felt there was a space for me and my acting career took off.”

The Lyric Hammersmith was home to many Tamasha shows including the remount mid-scale version of ‘Fourteen Songs, Two Weddings and a Funeral’ (2001) – an adaptation of the Bollywood film, ‘Hum Aapke Hain Koun’ (winner of Barclays Best new musical,1999) and Ghai appeared in that show.

“It was my breakthrough moment that was the first time I was on a main stage and it was for me one of the most invigorating times, because Tamasha had the main stage and the studio space. I remember thinking this is a watershed moment.”

At that time, Tamasha had taken over the Lyric Hammersmith, and the studio had the premiere of ‘Ghostdancing’ by Deepak Verma – a transposition of Zola’s ‘Therese Raquin’.

“The theatres were full, the audiences were loving it. So for all of us artists and creatives, it was a real sense of belonging and a real sense that our stories were needed and wanted to be told.”
As an actor, Ghai appeared in theatre and on TV.

She said that in her first TV job in ‘Holby City’, she played a grandmother appearing alongside Pooja Shah and Ameet Chana who were her contemporaries.

“What I found when I was acting was that I wasn’t getting the roles I wanted.

“I was pigeonholed and cast as an auntie, grandmother, mother at a very young age because I am a bigger set woman. That spurred me into thinking of how to get greater agency and that’s how I found my way to directing because I understood that through directing there was a different way to platform our voices and develop work.”

So, after 20 years as an actor, Ghai moved into directing which also had its own challenges. It was not an easy pathway for me, she explained.

“I talked to a lot of establishment organisations asking for advice and essentially I was told to go get experience and it wasn’t very forthcoming.

“I found a lot of barriers, I turned to people I felt safe with and belonged to. as an actor. I went to Kerry Michael (artistic director of Theatre Royal Stratford East {TRSE}) who gave me a seed commission to do a reading, then I became associate director and resident director which changed my life.”

She worked at TRSE for four years during which time she directed, ‘The House of In Between’ (2016), a play about hijras in India by Sevan K Greene; ‘Counting Stars’ (2016), by Atiha Sen Gupta, set in a London nightclub seen through the prism of toilet attendants and ‘Rapunzel’ (a panto in 2017).

“I realised my skill set was better served as a director. When I started directing, I understood my creativity better and understood how to communicate that process with artists I was working with.”

Ghai went on to pursue a freelance career and directed Tanika Gupta’s ‘Lions and Tigers’ at the Sam Wanamaker Theatre, Globe which won her the ‘Best Director’ accolade at the Eastern Eye Arts Culture and Theatre Awards, 2018.

She directed ‘Approaching Empty’ (2019) by Ishy Din, another Tamasha production and during lockdown worked with comedian and satirist, Mark Thomas on ‘Seriously Annoying’ performed at the Arcola Theatre in north London.

She is active in the theatre sector calling for more representation of global voices and performers, is a co-Chair of Artistic Directors of the Future.

Ghai, 46, always knew she wanted to be involved with drama since the time she was a child in Kenya, appearing as Aunt Polly in a school production of Tom Sawyer.

“I realised the impact of how stories could move inspire educate and resonate with us aged 11.”

She was educated at Imani Boarding School, Thika, Kenya and then moved to another boarding school in Kent.

She learnt to be independent and resilient at a very young age. One of three sisters, her family was born and brought up in Nairobi, Kenya.

She read Psychology and Sociology at Oxford Brookes University, set up a drama society there and regularly took plays to the Edinburgh fringe. Later she did a post graduate drama course.

Part of her mission is to continue to produce good work and revive ‘Lions and Tigers’.

I think Tamasha is very brave in its approach. It started as a company that focussed on South Asian stories and its place in the South Asian diaspora, and now works with artists across the global majority, she outlined.

She also explained that the company is a strong hold of talent development, and has a good foundation structure of how to provide pathways for artists, how to platform their voices, how to give them agency, how to develop them so they can springboard into the industry.

Ghai also realises that while there is a lot of focus on developing career pathways for emerging artists, other established artists also need to have sustainable pathways to continue their careers.

One of her key aims is to turn Tamasha into a leading new writing company producing middle-scale work forging clear career structures for established writers in the mould of English Touring Theatre or Headlong. Tamasha has had a profile as a middle-scale touring company with notable successes, including, two sold out runs of ‘A Fine Balance’ at Hampstead Theatre’s main house.

She believes Satinder Chohan deserves a bigger profile and should be a “household name”.

‘Lotus Beauty’ was originally commissioned by Tamasha (under Landon-Smith & Bhuchar) and it had an R& D reading at The Gate Theatre, Notting Hill.

Many years later it was sent to Roxane Silbert, the present artistic director at Hampstead theatre to read, who invited Pooja Ghai to direct it before she joined Tamasha. Now the rest is history, as they say.