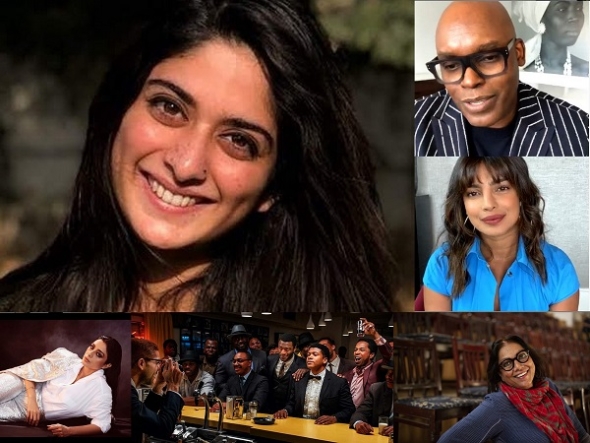 🎥 ‘One Night in Miami review’

Along with British Sheila Atim, who stars in the new Halle Berry directed ‘Bruised’, American Rainbow Dickerson in the film, ‘Beans’ and British-Canadian Madeleine Sims-Fewer in the feature, ‘Violation’, Maniktala has been chosen as a Toronto International Film Festival (TIFF) Women on the Rise – Rising Stars 2020. Three of these works are being screened at the festival, while ‘Bruised’ was screened as a work in progress and Berry talked about it in remote talk on the opening day.

Maniktala spoke to us about the accolade last week…

‘A Suitable Boy’ – all six episodes which finished screening on BBC One last month (and remain on i-player for UK audiences – see link below), will officially close TIFF on September 19.

We aim to carry a short report about her panel discussion, which is moderated by TIFF international programmer, Ravi Srinavasan, tomorrow (September 15) – see social media (see home page for links) for our updates.

Nair will be presented with an award tomorrow (September 15/16 in the UK & India) at the TIFF Tribute Awards – she will be given the Jeff Skoll Award in Impact Media along with other awards for actors Kate Winslet, Sir Anthony Hopkins, Chloé Zhao, Terrance Blanchard and director Tracey Deer.

Bollywood star Tabu who also has a prominent role in ‘A Suitable Boy’ is among those will present these awards. She joins other stars Colin Farell, Jodie Foster, Olivia Colman, Regina King, Delroy Lindo and Ava DuVernay, who will also help with the awards ceremony.

This will be broadcast across Canada live and then online for everyone from 1.30am (BST) from the international business entertainment title, Variety. Award-winning Canadian musician Shawn Mendes will peform at the ceremony.

It is day 5 of TIFF (minus five hours BST) and we have a review of the directorial debut film from Regina King (‘If Beale Street Could Talk’), ‘One Night in Miami’ film which is screening at this year’s festival. This year TIFF is both online and has physical screenings but in a much reduced programme than normal.

‘One Night in Miami’ goes back to 1964 and we are allowed access into a hotel room where Muhammad Ali/ Cassius Clay, Malcolm X, Sam Cooke and Ron Brown have assembled to celebrate Clay’s World title fight victory over Sonny Liston.

The film is fascinating and riveting dive into what it means to be successful – but still be dragged down by racism and unfair treatment. It has lot to say to us all in these times.

We also have a report on Bollywood and now very much Hollywood star, Priyanka Chopra Jonas – she spoke in an Instagram Live chat with Cameron Bailey, the artistic director of TIFF on Friday (September 11).

A familiar face at TIFF – she was there last year promoting her film, ‘The Sky is Pink’ and has also presented an Indian feature she produced in 2017 – see our story for more on this and what she told Bailey.