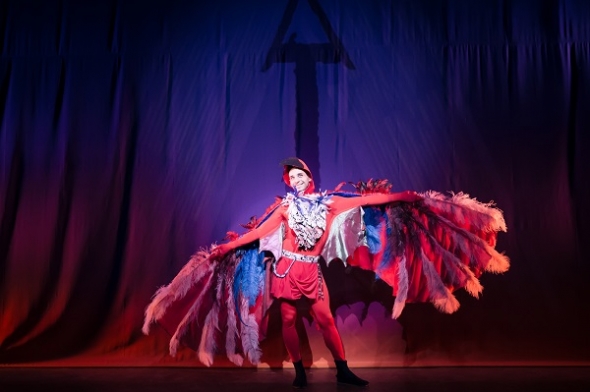 OH NO, IT’S NOT! Oh yes, it is! Panto Season is back and for the first time in its 133-year history, Theatre Royal Stratford East (TRSE) has put on ‘Rapunzel’.

It is the traditional fairy tale of the girl with the long hair who lives in a tower. It has just become the most successful show in the venue’s history.

Congratulations to Pooja Ghai, the Associate Director who has directed the show and announced this morning on Twitter that she was stepping down from her role to pursue a freelancer’s life.

It’s been a wonderful, life changing three years @stratfordeast. Thank you for all the love, laughter, work and cake. As I spread my wings I hold the TRSE family forever in my heart- and thank you @1KerryMichael for opening that door. It’s been amazing. 🙏🏽❤️

While everyone in the artistic community digests this information and have sent their support to Ghai via social media channels www.asianculturevulture.com will continue to update its readers, but back to ‘Rapunzel’ !

We caught up with Raj Bajaj one of the cast of ‘Rapunzel’ (written by Trish Cooke), who is playing two parts that of a mad scientist, ‘Iggy’ and a father, ‘Mr Bear’. This is his first time he has ever worked in panto, and he is enjoying every moment.

“It’s all a new experience and I am absolutely loving it!, “ he enthused. “We are doing 11 shows a week and if you embrace it, you can have a lot of fun with it.”

This week we will be working straight through for seven days until Christmas Eve, he added.

“You need to be disciplined, take care of your body, look after your voice and conserve your energy.”

He does it by having a short power nap between shows but that is not a regular occurrence.

In the show he changes character in virtually every other scene going from being the assistant to the Witch Maddy and then Mr Bear As such, he is toing and froing with the accent, mannerisms, clothes and singing.

“I have countless changes as soon as one costume comes off I go straight into the other.” He also has to sing, but that is slightly out of his comfort zone (although he has performed in ‘Bend it Like Beckham’, Gurinder Chadha’s musical at Phoenix Theatre in 2016).

Bajaj, who was born and brought up in Bristol, trained at ALRA (Academy of Live and Recorded Arts) and has been fortunate enough to work with director Ghai before.

He first met her when they both worked together in ‘The Snow Queen’ (Unicorn 2011), and it was his first professional job after graduation.

He said that because she has been an actor, Ghai understands how actors function and takes time in her approach to directing.

His work in ‘Lions and Tigers’ was also very different to this show, which Ghai also directed.

‘Lions and Tigers’ by Tanika Gupta, was the true story of a freedom fighter, Dinesh Gupta (one of Gupta’s uncles), set in India and performed in the Sam Wanamaker Playhouse stage at The Globe with a minimal set.

Juliet Okotie and Gemma Salter and Raj Bajaj in ‘Rapunzel’

Panto is an extremely difficult genre to pull off and only works if the audience participate and on the nightwww.asianculturevulture.comsaw it they were having a good time.
Rapunzel (Joanne Sandi), with her long purple locks lives in a tower, where her mother, Witch Maddy – excellently played by TRSE panto stalwart, Michael Bertenshaw – has confined her, convincing the girl that she is safe but in reality, she is keeping her as a prisoner.
The witch uses the juice from her purple hair as an elixir to keep herself youthful. However, this is not enough to make her as young as she’d like to be so she’s looking for the perfect herb which can only be gotten through yellow hair. (When this transformation finally happens, Maddy is a sight to behold – but we won’t spoil the fun).
She experiments in her lab (a retro designed caravan) helped by her two assistants, Lizzy and Iqqy played by Juliet Okotie and Raj Bajaj respectively. They were lizards who have been bewitched and become human.
We meet a Baby Bear (Gemma Salter), and a bird Egor (Gary Wood), who works for the Witch Maddy, and wishes the young people in the audience a happy birthday, while generally the plot is suffused with safe family friendly double-entendre jokes like: “I wish I had more like me. Do you want to leave or remain? I am going to Remain!”
The story is subverted because in this version ‘Goldilocks and The Three Bears’ make an appearance and instead of the handsome prince we have #girlpower with Goldilocks rushing to rescue of the distressed princess…
The sets and costumes designed by William Fricker are stunning – with the African themed colour schemes and the live music, comedy and general silliness makes it possible to let your hair down and go with the flow…
ACV rating: **** (out of five)

Privacy & Cookies: This site uses cookies. By continuing to use this website, you agree to their use.
To find out more, including how to control cookies, see here: Cookie Policy
← Gurinder Chadha – most prolific UK active woman filmmaker, why Bend It would not be made today – and more BFI ethnic research
Riz Ahmed wins historic Emmy and says he is proud of London and UK…( reaction & Emmy South Asian roundup) →