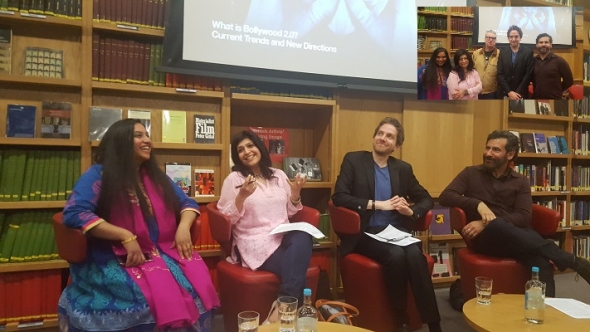 BOLLYWOOD is changing and in doing so is being more creative and far more daring than Hollywood, a leading critic posited yesterday at a talk at the British Film Institute (BFI).

Mike McCahill, who regularly reviews Bollywood films for The Guardian and The Telegraph in the UK, said: “Bollywood is doing something different, it is not just putting out a superhero movie every three weeks which helps people munch on their popcorn.”

He said it was doing far more – challenging social conventions, introducing new ideas and at times, showing a more worldly sensibility than it had done in previous times.

He made the comments as the BFI brought together a panel of experts on Indian cinema to discuss ‘Bollywood 2.0 – current trends and new directions’, ahead of its BFI India on Film season getting properly underway.

McCahill said one of the best examples of Bollywood’s greater imagination was ‘Lootera’ (2013).

“It is based on the classic short story by American author O Henry, who in the US is making films like this?” McCahill posed.

Directed by Vikramaditya Motwane, whose ‘Udaan’ (2010), was one of the first modern Indian films after a long time to show at Cannes’ prestigious Un Certain Regard section, the film stars Ranveer Singh and Sonakshi Sinha and is a period piece set in West Bengal in the 1950s.

Earlier, Omkar had talked about changing aesthetics in Bollywood and homed in on feminism.

Panjwani suggested ‘item numbers’ could be viewed more positively and were often the only place where Indian women could express themselves freely (and sexually).

Item numbers are essentially musical sequences, often quite unrelated to the plot but with a female star/protagonist cavorting to raunchy lyrics and upbeat music and demanding action(…of what kind is usually left to the viewers’ discretion).

“I love item numbers,” professed Panjwani, rather startling the audience. “Of course, they objectify women, and objectification takes places across cinema (both East and West), but it is one of the few places, (in Indian society) where women can articulate their desires, and if you analyse the lyrics you will see that.”

She felt Bollywood was improving in its representation of women and things had moved on a lot from the classic, demure heroine, who said little but looked pretty and stoic.

Panjwani felt women were getting a better deal from Indian films generally.

“It’s (the representation of women) changing a lot – let’s face it Hollywood is not doing any better.”

She said one of the female central characters in ‘Shuddh Desi Romance‘ (2013) was a good example of changing mores in Bollywood.

“She is in a live-in relationship with no expectation of (settling down) or having an arranged marriage,” Panjwani reflected.

Sawhney, sounded a more sceptical note and pointed out that in many films, especially those made for local audiences only, the common trope for romance, was a lovelorn male lead who is taken by lust (or love at first sight) and proceeds to launch a stalking campaign – that comes good and the couple live happily ever after.

“There is a Tamil film, in which there is a beautiful woman doctor and the male lead gets a job as a nurse to be close to her and stalks her – but they fall in love,” he pointed out.

Later in the talk, McCahill said Alia Bhatt, who was far less famous then she is now, represented a new breed of star developing in India.

“They are essentially character actors,” he pointed out. “They don’t want to look the same in every film.”

He said that even established stars, such as Shah Rukh Khan, one of India’s biggest, was willing to play darker, less attractive parts. In his most recent, he plays a bootlegger in ‘Raaes’.

“He made ‘Fan’ and played a younger version of himself, that was far from flattering,” McCahill stated.

The panel also discussed the rise of regional Indian cinema.

The BFI is to show the South Indian blockbuster ‘Baahubhali’, both 1 and 2. ‘Baahubhali: The Conclusion’ screening on April 27 is already sold out and will see SS Rajamouli (increasingly likened to George Lucas in India for creating a franchise and spin-offs) attend, along with cast members Rana Daggubati and Tamannaah Bhatia.

The panel also discussed another South Indian film coming up in the season ‘Kandukondain Kandukondain’ (‘I have seen, I have seen’) – it will screen on May 26 at the BFI.

It is a Tamil version of Jane Austen’s ‘Sense & Sensibility’ and enjoyed widespread critical acclaim. It features some of the biggest stars of South India cinema, Mammooty and Ajith Kumar, and also has Tabu from Bollywood, and a young Aishwarya Rai starring.

In what was a very wide ranging discussion, the panel talked early on about ‘Kapoor & Sons’ (2016), and the light and unaffecting way it deals with adultery and homosexuality (two themes Bollywood has largely avoided); the career and films of Anurag Kashyap – with McCahil saying the auteur’s films as a producer, rather than a director, were better; an emerging young generation of filmmakers more in tune with global sensibilities, citing ‘Court’ (2014) and the work of Chaitanya Tamhane who won in Venice and is supported by their talent production arm; the ability to make films for a global audiences through web-enabled platforms; the role and part played by Satyajit Ray and indie filmmaker Nagesh Kukunoor and his ‘Hyderabad Blues 2’ (2004) and the way languages are being increasingly mashed-up, especially in indie cinema, with English very much in the mix

BBC and The Observer film critic Mark Kermode was in the audience and joined the panel afterwards for pictures.