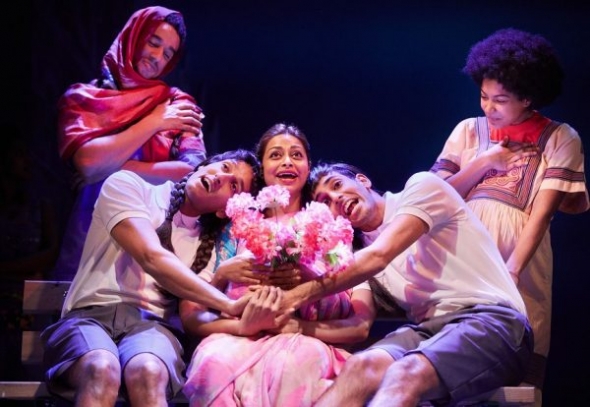 Play of much vaunted novel delivers and one of the two young central male characters, Sid Sagar, talks to us about what it means to be in a stage version of a contemporary classic…

THE PLAY,  ‘White Teeth’ currently on at Kiln Theatre, is an enjoyable interpretation of Zadie Smith’s eponymous novel of the multicultural melting pot of London and set in the High Road (north west London).

One of the key story lines revolves around the Iqbal family where the father, Samad Iqbal is played by Tony Jayawardena, while Ayesha Dharker, is ‘Alsana’, the mum of two twin boys, ‘Millat’ (Assad Zaman) and ‘Magid’ played by Sid Sagar.

The Iqbals are friends with the Jones’ family and daughter, ‘Irie’ (Ayesha Antoine) is a pal of the twin boys and her father, ‘Archie Jones’ (Richard Lumsden) and Samad served together in World War 11.

www.asianculturevulture.com attended the opening of the show and enjoyed the adaptation by Stephen Sharkey (see review here.)

We caught up with Sid Sagar to give us the lowdown on his main character Magid Iqbal and other aspects of the show.

“He is the one that when the twins are about nine years old,  Samad their father decides to send away to Bangladesh to learn the old ways and grow up in a less intimidating environment then inner city London to try and hold on to some kind of tradition.

“In the end he develops into pursing a very intense form of scientific research particularly with genetics and then when he comes back he rejoins the family and he’s ironically turned into a ‘white coat kind of pukka English cocky scientist’ as Samad says!”

Sagar is a gentle and sincere presence on stage and in real life the same degree of sensitivity echoes his characters’ story.

“Magid begins to work with Marcus Chalfen (Philip Bird) who is also working on the future mouse project so he becomes a leading academic.”

Do you think people need to have read the book to enjoy the show, we ask?

“I think what Stephen Sharkey (the playwright) has done really well is  that he’s managed to maintain all the essence of Zadie’s novel which is capturing vivid, flawed characters and this mess of the Kilburn High Road and North West London but also added a real conciseness’ to the way the story is told.”

He explained the play is two and a half hours long, but moves at a pace, so you get a lot of information which can be a bit overwhelming at times and through various narrative techniques using fast forwards, rewinds and flashbacks.

“They are really helpful in establishing or reinforcing who the characters are, their relationships to each other, so it’s a very nice kind of classical sense of storytelling that happens in the play.”

So audiences who come to the Kiln to see ‘White Teeth’ having no idea of what the book can still enjoy this “play with songs” as it is described.

The twins have a special song with their mother while she is pregnant where she imagines what would happen if she gave birth to twin girls. The tongue in cheek song is called “Beautiful and Dutiful”.

“There’s a lot of dressing up like little girl that’s all fun and light hearted but the music that Paul Englishby, the composer has come up with  takes you through all different genres.”

The show has around 13 songs, including a vaudeville like war time shuffle which Archie and Samad sing at the end of the war; then there’s also an 1980s song which celebrates all that is vivid and brilliant about being alive.

“These songs give you an opportunity to almost catching up with the story telling while hopefully relishing and enjoying a lot of the fun that is going on, on stage.”

Sagar has worked with actor, Tony Jayawardena and director,  Indhu Rubasingham before, in ‘The Invisible Hand’, a play by Ayad Akhtar (who won the Pulitzer Prize for his play, ‘Disgraced’)

“‘The Invisible Hand’, a political thriller was really brilliant for me to be part of. I was the young Pakistani terrorist who is the easily manipulated character alongside a young British guy who comes back and alongside the Iman who was played by Tony Jayawardena. He’s now playing my dad.”

That play was the final production in the old Tricycle Theatre before they closed down for a two year refurbishment.

‘White Teeth’ is the second show here at the Kiln, so it’s full circle for me to return to a place I have a real fondness and affection for, he said.

People still demonstrate outside the Kiln Theatre expressing their displeasure about the name change, but the new venue also has a lot of support.

For Sagar, the most important thing is the programme.

“It’s a thoroughly exciting season of plays by writers from the UK, and abroad, it’s  a season of excitement, diversity and radical, bold theatre that is doing so much to encourage people to come and share in an experience, and that’s ultimately what theatre is all about!”

Sid Sagar was born in Nairobi, and grew up in Hertfordshire. He studied acting with the National Youth Theatre and Identity School of Acting, and studied History at the University of Bristol.

His first professional job was at the Globe Theatre in ‘The Taming of the Shrew’ (2012), directed by Toby Frow but he didn’t actually have any lines!

He came to notice when he played the lead in ‘True Brits’, the debut play by Vinay Patel which was on in Edinburgh and Bush Theatre in 2014.

When he is not acting, Sagar has also turned his hand to writing.

“It’s been enjoyable for me to be able to focus and decide to try and create my own stuff and submit to various short festival scratch nights.

“With writing there is a certain level of being able to take some ownership and restore some agency to your creative endeavours,” he told acv.

He has presented work at the Tamasha Developing Artists Programme and his short play, ‘Papa’ is in a new publication of short plays. (See link here). But coming back to ‘White Teeth’ why should we see the play?

“It’s a perfect play for the Kiln theatre, a kind of rebirth, as an exciting place to share ideas and to engage with others. It’s such a brilliant celebration of messy, complex, vivid lives we all live in London. It’s fun!

Privacy & Cookies: This site uses cookies. By continuing to use this website, you agree to their use.
To find out more, including how to control cookies, see here: Cookie Policy
← London Film Festival 2020 Reviews more (2/2): The Human Voice; 200 Meters; Limbo; Bloody Nose, Empty Pockets; Time
London Film Festival 2020: ‘Lovers Rock’ – Nostalgia and romance don’t get better than this (review) →