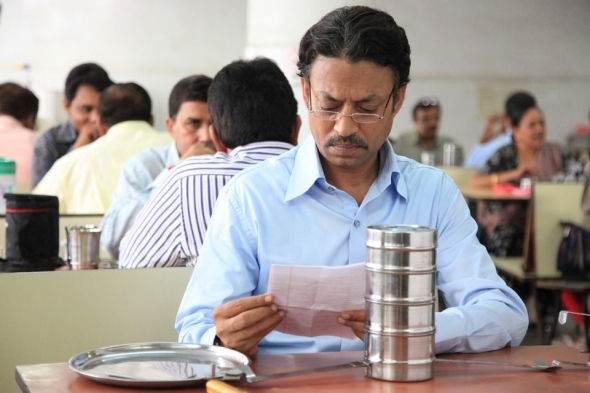 DEBUT India feature director Ritesh Batra’s much talked about and highly acclaimed, ‘The Lunchbox’, will get its UK premiere at the London Film Festival, October 9-20, it was announced yesterday, (September 4).

The gentle, quirky, romantic comedy is already being talked of in India as its Oscar entry and comes to London with the high praise of critics at home and the ringing applause of those in Cannes, from earlier this year.

It goes on general release in India on September 20 and we talked to one of its stars Irrfan Khan in Cannes in May (See http://asianculturevulture.com/portfolios/irrfan-khan-a-romantic-at-heart/)

‘The Lunchbox’ is one of five new films and one old one from the subcontinent in the UK’s biggest film festival and gets top billing in the official competition section.

Of the other films, both ‘Jeevan Smriti’ and ‘Sniffer’ will attract much interest from festival film goers.

‘Jeevan Smriti’ was the last film made by iconic contemporary Bengali director Riturparno Ghosh, who died in May this year, aged just 47.

Regarded by many in India and especially those in Bengal, as the true inheritor of the genius of filmmaker Satyajit Ray, ‘Jeevan Smriti’ (JS) will have added poignancy in the light of Ghosh’s rather sudden death.

With the festival split into distinct themed categories of films, ‘Jeevan Smriti’ appears in the ‘Love’ section and is the director’s very personal journey and exploration of another towering world and Bengali icon, Rabindranath Tagore.

‘Sniffer’ is made by Buddhadeb Dasgupta, who is very much part of the firmament of a new generation of Bengali directors making their way into the world’s film consciousness.

‘Sniffer’ is a black comedy about a small time private detective – a sniffer – whose life is slowly falling apart and the central character is played by the virtually incomparable and versatile  indie star Nawazuddin Siddiqui (who also, incidentally, features in ‘The Lunchbox’ ).

Also in the ‘Journey’ section is ‘Siddharth’ made by Canadian based director Richie Mehta; it explores the nightmare that befalls an ordinary poor family when their 12-year-old son, Siddharth, goes missing, presumed kidnapped in Delhi.

‘Gulf to Gulf’ is a creative documentary using footage from those seafarers who ply trade routes between the Arabian Sea and the Persian Gulf and appears in the ‘Experimenta’ section.

‘Kalpana’ is a totally re-mastered classic from 1948 and is the only cinematic work of Uday Shankar, the brother of the late renowned sitar-playing Ravi.

A dancer by training, Uday’s Himalayan Dance Academy closed in the 1940s and he sought to immortalise his work in film.

‘Kalpana’ shows his importance in fusing together classical Indian dance with a more contemporary western idiom and the film was restored to its rightful glory by Martin Scorsese’s Bologna-based World Cinema Foundation, which restores classic works which have degraded over time.  It will appear in the ‘Dare’ section of the festival.

Cary Rajinder Sawhney, curator of the South Asian section of the LFF and director of the independent London Indian Film Festival told ACV, two other Indian films were considered but the final selection was strong and gave filmgoers an opportunity to see the variety of work emerging from India.

The festival will show 234 films, 134 shorts, from 74 different countries and will close with ‘Savings Mr Banks’, a film about Walt Disney and PL Travers, the creator of the character Mary Poppins.

Paul Greengrass, the director of this year’s Gala opening film, ‘Captain Phillips’ was a surprise guest at the launch of the programme at the Odeon Leicester Square.

Earlier, the press and sponsors heard from Amanda Nevill, British Film Institute (BFI) chief executive officer and Clare Stewart, festivals director, who both said they wanted to build on the success of last year’s festival which saw audiences rise by 13 per cent with more than a third of all audiences first-time LFF goers.

Pictured: Irrfan Khan in ‘The Lunchbox’