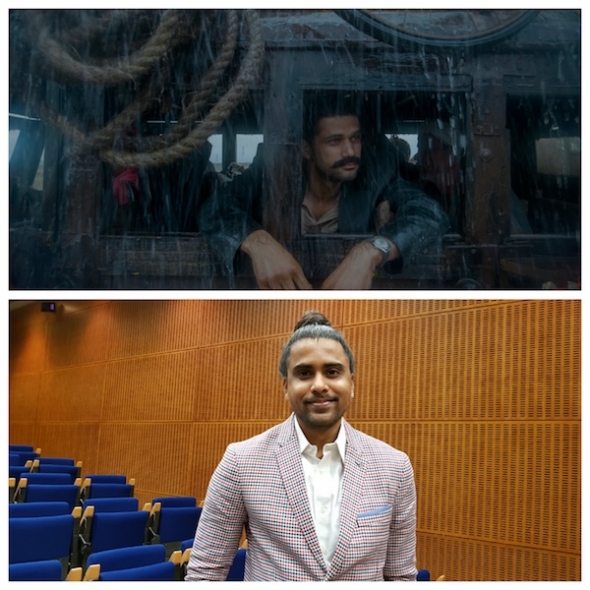 BILLED as a ‘horror’ film it has considerably more to it – not least an actual monster/devil figure in ‘Hastar’, who is scary and foreboding and gives the film a visceral energy of its own.

He represents the devil or in the mythology presented a figure at the beginning of time who has to crudely decide between money and nourishment – he chooses money and so is constantly hungry as the legend goes.

Appease him (in a not altogether honest form) and you can enjoy riches, not of this world…incur his wrath and be cursed for hundred years or more – as the central characters’ grandmother suffers this fate.

Many filmmakers might have stopped short of actually showing a visual representation of ‘Hastar’ (devil/monster) but Adesh Prasad, the film’s co-writer, co-director and editor, told acv at the International Film Festival and Awards Macao (IFFAM) that he always wanted to show such a figure and it was part of an early set of issues which he felt had to be resolved.

It’s clear that making ‘Tumbbad’ was no easy process – an early shoot and early cut failed to match his expectations.

Prasad had just finished work on ‘Ship of Theseus’ (2012) as its editor.
This is the Anand Gandhi directed film which has won awards and accolades and happens to be the first live piece ever published on www.asianculturevulture.com (here).

It came to London Film Festival in 2012, and remains one of the best (Indian) independent films acv has seen.

Prasad is very frank about the whole experience of ‘Tumbbad’.

“I can safely say that no part of making this film has been simple or straightforward or relaxed,” he declared.

But everyone has produced a film of lasting quality – and when Venice Film Festival came onboard and gave it the green light, the team behind the film knew their perseverance was about to pay dividends.

It enjoyed its world premiere in Venice in the autumn as part of their critics strand.

“They saw a very advanced cut, and they were happy and they didn’t have to do it – it was a relief,” narrated Prasad.

He had seen the first version of ‘Tumbbad’ in early 2013, a few months after taking a break.

“I didn’t think the film worked. It looked incredible and absolutely stunning but dramatically and emotionally it didn’t work for me.”

At another screening, others agreed and so work began on improving it – with Prasad rewriting scenes along with others and shooting some more too.

As he reiterates rather like his experience on ‘Ship of Theseus’, the film had to be found on the cutting floor.

“It had to be found on the table,” Prasad said.

He did not like the original ‘Hastar’ and in the early version, the creature emerged only at the very end.

“He was very different and a very old frail looking thing – not what like you see now.

“I thought you can’t have an audience wait for so long and leave them like that.”

“There was not much special effects, it was an actor wearing prosthetics,” explained Prasad.

They engaged a VXF company, and Sean Wheelan of Filmgate Films, in Sweden, came on board and Hastar began to get his foreboding form.

“He said we can replace what you’ve shot with a new creature and I was so relieved,” revealed Prasad.

It’s very powerful, and so too is the cinematography – the whole atmosphere of the film is eerie and unpredictable and peopled by memorable characters.

At the very heart of the action is ‘Vinayak’, played by Sohum Shah, who is a greedy and rather unthinking man who routinely cusses his own flesh and blood, and uses ill-gotten spoils to fund a mistress and other dubious activities.

The inspiration for the original story came from Rahi Anil Barve, a filmmaker who announced himself with a 41-minute film, ‘Manjha’ (2007) – which ended up being included on the BluRay release of ‘Slumdog Millionaire’ and was personally chosen by director Danny Boyle.

Prasad said: “He had been working on this for decade and what he told me was that in 1999, he had read a short story and he was in the jungle and it was raining and it left a mark.”

That mark now remains with us in the form of ‘Tumbbad’.
Prasad is writing something different and heads up Sohum Shah Films. Shah, whose reputation as an actor has been growing, plays the lead character and produces his own films.

It screened on December 8 (the opening night) at the International Festival and Awards Macao in the Flying Daggers non-competitive section. This strand aims to showcase the best of international genre filmmaking – five other films screened in this section, BuyBust (Philippines ); Diamantino (Portugal); In Fabric (Britain);  and Mandy (US), starring IFFAM ambassador Nicolas Cage.

Privacy & Cookies: This site uses cookies. By continuing to use this website, you agree to their use.
To find out more, including how to control cookies, see here: Cookie Policy
← Sundance 2021: Indian success for documentary about all women media team in ‘Writing with Fire’; Riz Ahmed ‘Flee’ also wins award; ‘Fire in the Mountains’ world premiere…(wrap and links)
Sundance 2021 – Amy Tan: Unintended Memoir; Cusp; First Date…(reviews) →