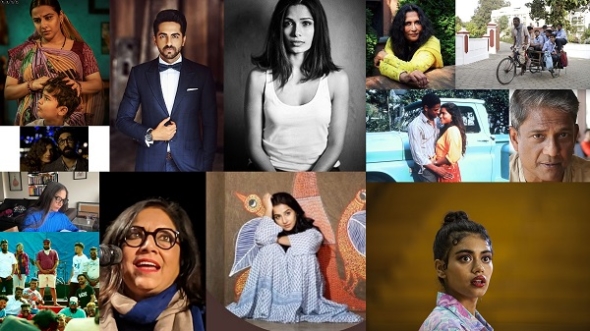 Now in its 11th edition, the festival has innovated…

THIS year’s London Indian Film Festival has gone totally digital and has lined up a host of interviews with leading actors and directors.

These along with several UK film premieres can be seen over the duration of the festival from tomorrow (June 25) to Sunday, July 5.

While the interviews are available from anywhere in the world – the films will be available only to UK audiences – and can only be viewed for a limited time – see further details below please. You will need to register with LIFF to watch these.

Ayushmann Khurrana – tomorrow (June 25)
Now a Bollywood star, since appearing alongside legend Amitabh Bachchan, in ‘Gulabo Sitabo’, which dropped on Netflix a fortnight ago), his hard-hitting ‘Article 15’ opened this festival last year. He broke through in ‘Vicky Donor’ and has done a roll call of notable films, including the critical and commercial smash, ‘Andhadhun’ (2018) and ‘Dream Girl’ (2019).

Adil Hussain (post-screening Q&A ‘Pareeksha’) Saturday, June 27 One of the best known actors outside of India, (‘Star Trek’ and ‘Life of Pi’) Hussain has appeared in previous festival favourite, ‘Parched’ (2016) and he talked to us about ‘Pareeksha’ at the International Film Festival of India last year (IFFI 50) where the film enjoyed its world premiere.

Vidya Balan, Sunday, June 28 (post screening Natkhat Q&A)
Far from your conventional Bollywood starlet, Balan has been courageous in taking on roles others might shun most noticeably in ‘The Dirty Picture’, and was part of the Cannes main jury in 2013, a year later. Her short film ‘Natkhat’ about a mother educating her son about gender equality, screens at the festival and she also stars in the much anticipated biopic of Indian maths genius, ‘Shakuntala Devi’, which is expected to drop on Netflix soon. (Part of the film was shot in London).

Shabana Azmi, Tuesday, June 30
Needs no introduction to those familiar with Indian cinema – an iconic figure as well known for her activism, her career took after appearing in the much respected and critically-acclaimed director Shyam Benegal’s ‘Ankur’ in 1974. Since then she has never looked back and appeared in UK theatre, with Rifco Theatre’s ‘Happy Birthday, Sunita’ and gay comedy drama, ‘Signature Move’

Mira Nair (post screening) of ‘Mississippi Masala’, Thursday, July 2
Ever since ‘Salaam Bombay’ in 1988, Nair has stamped her authority as a director of Indian origin with a particularly global and often ground-breaking vision in her work – ‘The Queen of Katwe’ (2017) was a love letter to East Africa, where part of her family are from, and was both a commercial and critical smash. Her taboo-breaking love story between African-American (Denzel Washington) and Indian American Gujarati (Sarita Choudhary) in ‘Mississippi Masala’ (1991) caused uproar at the time, but is hugely topical and remains a rallying point for racial equality and love across arbitrary lines (see http://asianculturevulture.com/portfolios/black-lives-matter-looking-between-the-lines-love-culture-and-art-across-south-asian-and-black-communities/)

Freida Pinto – Sunday, July 5
Star of ‘Slumdog Millionaire’ (Danny Boyle), Pinto has established herself in Hollywood and came to London to promote her role in the ficitionalised UK Black Panthers Sky drama, ‘Guerilla’ (2017).

Moothon (The Elder One) – Friday, June 26 – 8pm-10pm
A young boy on the the Lakshadweep Islands (just off India’s western coast), misses his older brother and he sets off on a journey to find him – ending up in Mumbai where he gets mixed up with unsavoury elements. See our review from the Mumbai Film Festival last year, where it opened the festival.

Pareeksha (The Final Test) Prakash Jha – Saturday, June 27 8pm-12am (available to view) – 1 hour 55mins
Star Adil Hussain is a rickshaw puller who transports a bunch of rich children to their posh, academically excellent school and dreams of sending his bright but less privileged son there and it leads him to some moral dilemmas.

Natkhat (The Brat) Shaan Vyas – Sunday, June 28 – (available from 12am for 24 hours to view) – 33 minutes
A mother (Vidya Balan) realises she needs to teach her son a different way after an incident in school…

The Miseducation of Bindu – Prarthana Mohan Saturday, July 4 (available for 24 hours) A coming age of comedy starring up and coming actor Megan Suri, the film set in an American High School is very much about identity, bullying and trying to fit in and looks on the surface, similar to Mindy Kaling’s hit Netflix series, ‘Never Have I Ever’ and with supporting roles from David Arquette and Priyanka Bose, this looks like one not to be missed for anyone interested in how young people navigate the challenges of today, growing up.

Breaking Barriers – The Casteless Collective (Maja Meiners) – Sunday, July 5 (available for 24 hours) This is a documentary centred around a protest band called The Casteless Collective based out of Chennai. Set up in December 2018, the 15-member band play a form of folk music known as Gaana, which originates from North Chennai’s slum areas and the group focus on tackling social ills and are made up of members of marginalised sections of Indian society who are campaigning for equality and rights.

These films have been available since June 19 – Song of Lahore; The Last Adieu; Monsoon; Hank and Asha; Rat-Trap (Elippathayam); The Wrestlers (Uttara); Runway; Ship of Theseus

Cary Rajinder Sawhney MBE, executive & programming director of LIFF, said: “We are delighted that we have been successfully able to move the festival into a digital offering during the UK lockdown and especially want to thank the generous film companies, actors and directors who have contributed their time and effort to help us achieve this high quality free site, which we aim to evolve into the future so that more people across the UK can view Indian indie cinema. As well as classic LIFF films, we have some amazing new UK premieres that will continue LIFF’s reputation for showcasing the best of South Asian cinema.”

Ben Luxford, head of BFI Audiences said: “We are delighted to support LIFF’s ambitious plans to present the festival online and, by doing so, ensure that this year’s programme of South Asian cinema reaches an even wider audience.”

Alka Bagri, trustee of the Bagri Foundation said “It is with great excitement that we celebrate the launch of a virtual festival for our sixth year as title sponsor for LIFF. In this unusual year, LIFF has responded swiftly and creatively to ensure a wide range of fantastic features, talks and interviews. Some are from the archives, with past hit films, whilst others are exciting new releases accessible for only a few hours. We congratulate LIFF on a stellar line-up!”

Register with the London Indian Film Festival to watch