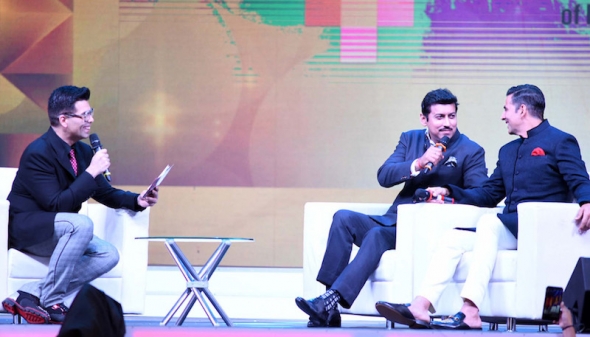 India’s premier film festival opened with a near three-hour long floor show and then its opening film, ‘The Aspern Papers’ – a world premiere – starring Jonathan Rhys Meyer, Joely Richardson and Vanessa Redgrave, played to an audience for the first time with the director and three other actors in attendance.

Meyer was scheduled to be in Goa for the fest but could not make it because of the terrible wildfires that have ripped through California and caused problems in towns such as Malibu where Meyer lives.

That aside, the floor show and entertainment made a statement and mention was made of it being a forerunner to IFFI 50 next year.

Johar, who is famous in India not only as a Bollywood director, but as a chat show host, ‘Koffee with Karan’, recreated his famous set of white sofas on the stage at the Dr Shyama Prasad Mukherjee Indoor Stadium in Taleigo, just a short distance from the main festival area in Panjim – and quizzed both Kumar and Colonel (retired) Rajyavardhan Rathore, the minister of state for information and broadcasting and whose department manages and organises IFFI.

In similar fashion to his chat show antics, Johar put both the minister and the Bollywood star ‘on the spot’.

Members of the IFFI jury:

Perhaps, the most significant element of the encounter was when Johar asked Colonel Rathore, a much decorated competitive shooter with at least one Olympic Games medal, how many films had he made directing one of Bollywood’s most successful film actors with a string of recent hits, including ‘Gold’ (see this); ‘Padman’ and ‘Toilet: Ek Prem Katha’.

The answer, surprisingly, is none and both director and actor left the stage vowing to change that.

Earlier there was a raft of entertainment for the assembled audience, as well as two short video segments extolling Jharkhand, the state, as a possible destination for filmmakers, and the recently unveiled Statue of Unity in Gujarat.

Now the largest statue of its kind in the world, the government is clearly keen to promote tourism to the state where the statue of freedom fighter and India’s first deputy prime minister, Sardar Vallabhbhai Patel (known popularly as the Iron Man of India) stands.

The audience was also introduced to the Jury for this year’s IFFI and heard a little about the special country focus, which this year is Israel.

‘Shalom Bollywood’ which screened earlier this year at the UK Asian Film Festival is among 10 films chosen to represent the country at IFFI as part of the focus. The documentary film, made by Brit Danny Ben-Moshe, looks how early Indian cinema was dominated by members of Bombay’s (as it was then) Jewish community.

Israeli director Dan Wolman was presented with a Lifetime Achievement Award by IFFI and handed a cheque by sponsors for over £10,000.

The director of the opening film Julien Landais and other members of the cast in Goa for the world premiere of ‘The Aspern Papers’ were introduced on stage to the audience and the estimated 30 million viewers watching live on Doordashan, India’s national channel. (See the link below for the show).

Among the entertainment was playback singer Shilpa Rao, and Sonu Sood.

SIMMERING with unrequited passion and desire, Julien Landais’ first film is a triumph of sensibilities.

Shot in Venice, and set in the 19th century, ’The Aspern Papers’ enjoyed its world premiere last night (November 20) at the International Film Festival of India (IFFI).

Starring Jonathan Rhys Meyer and Joely Richardson, with a super turn from the ever redoubtable Vanessa Redgrave, this is straight out of the one-time Merchant-Ivory handbook, transporting the viewer to a world of much physical beauty, decadence and desperate secrets.

And possibly explains how Landais’ feature landed here by the Arabian Sea and not another film festival on the European circuit.

The French Landais, in what is his first feature, shows considerable promise and talent, constructing a delicious period drama from a somewhat faded Henry James novella of the same name.

James’s exquisite prose acts as lead character’s Meyer’s biased and exacting voiceover, and the dastardly ‘Mort’ (Meyer) is himself a writer in search of ‘The Aspern Papers’.

Between him, and the possible scandal therein, lies both Redgrave as a curmudgeonly old woman whose past youth was intertwined with the divine Aspern, a much celebrated poet with a messy private life; and Richardson as a spinster niece who cares for her aunt and lets Meyer’s character inveigh himself into her drab and humdrum life. The result is explosive…