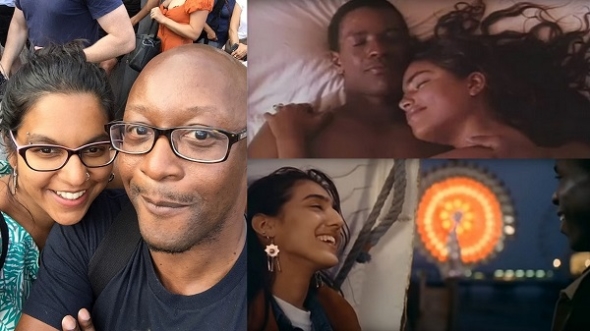 Why don’t we see more Black and Asian couples in books and films? How should South Asian communities respond to the very urgent and necessary action called for by movements such as Black Lives Matter? How do artists react to the current crisis? Can they?

WITH THE PULSE of the Black Lives Matter (BLM) movement loud and prophetic right now, I’ve been thinking a lot about the relationships between South Asian and Black communities; our history, commonalities, differences and most of all where to place ourselves in all of this. As a woman married to a British Caribbean man, this struggle is particularly intimate for me.

At my daughter’s second birthday, I noticed how many types of South Asian and Black relationships were in our midst; there was our interfaith minister, two close friends as well as nieces and nephews of other friends. Gujarati, Punjabi, Bangladeshi, Trinidadian Indians had mixed with Bajan, Jamaican, Dominican, Guyanese and Nigerian folks, and of course we aren’t the only ones. In all parts of our diasporic history, cultural mixing of our kind has been pervasive, if taboo. This is not to say that these relationships have been utopian or even suggestive of any type of acceptance; talk to any cross cultural family, we would no doubt encounter stories of difficulties, negotiations and heartaches on both sides. But we do exist and mixing between our two communities, even outside of romantic interactions, has existed for hundreds of years.

As a child I can remember my extensive family using words like ‘kala’ in a derogative way, making jokes about Black people and generally feeling it necessary to keep us and ‘them’ separate.

As South Asians we have been upholding, mirroring and perpetuating the racial discriminations directed at us towards the Black community for generations. The legacy of colonisation and casteism means that we are still very much under the thumb of the racial hierarchy in which we actively participate in. At times like this it’s vital that we consider our role in anti-Blackness and challenge this.

The late great Amari Baraka said: “The attempt to divide art and politics is a bourgeois which says good poetry, art, cannot be political, but since everything is … political, even an artist or work that claims not to have any politics is making a political statement by that act.”

Art plays a vital role at times of societal change and as a writer I’ve been reflecting on the ways in which I’ve seen our relationships with each other depicted through art.

What I noticed is despite the fact that our communities have intersected deeply and still do, there is a taboo around the subject that reflects pro-Whiteness and anti-Blackness. Our love for Black music from Jazz, Michael Jackson, Prince to Hip Hop, is an ongoing love affair, but our desires to mix beyond is fraught with issues of shame, resistance and deep seated prejudice. But there are artists who, despite this, have crossed over and explored the issues.

My first exposure to a South Asian and Black relationship was on screen in the 1993 British Asian classic ‘Bhaji on the Beach’. Brave and groundbreaking, Chadha’s film remains to be one of the very few to explore the diversity of experiences of being a British Asian woman and was the first time I ever felt really ‘seen’. The film follows a day trip of an intergenerational group of Asian (mostly Punjabi) women to Blackpool, unpacking issues around love, domestic violence, racism and inter-racial relationships along the way.

I remember being surprised but also vindicated to see that the impossible was possible, as would-be-painter, medical student ‘Hashida’ (Sarita Khajuria), explores her relationship with Black British ‘Oliver’ (Mo Sesay). At the time I too was a student, would-be-writer embarking on a career in pharmacy. I also had dated a Trinidadian man, facing many of the same issues as Hashida; hiding from parents, feeling frustrated and very scared. Feeling that my story was valid and worth exploring was a seminal moment for me as a writer. Though the film didn’t have the scope to explore the complexities of this taboo extensively, it was the visual, the tableau, of seeing these two young people together, that echoed with me for years to come.

As South Asians, we have had our distinctive struggles and issues living amongst White society, and at the same time engaging with the position we have been put in by our history. We are often the wedge between Black and White relations, which have been extensively imbedded especially in communities from the African continent.

This was explored in Mira Nair’s beautifully rendered ‘Mississippi Masala’ (1991) which explores the relationship between South-Asian-American Mina (Sarita Choudhury) and African-American Demetrius (Denzel Washington) against the backdrop of the American South.

I loved and still love this film as it is the only depiction of the South Asian, East African heritage and that packs the issues around this very specific experience.

My dad is from Kenya and the proximity and love between two cultures living side by side, and the pervasive sadness and nostalgia that remains is never really spoken on both in real life or art. Exploring the complexities of Mira’s father (Roshan Seth), who loves Uganda but is unable to come to terms with their daughter’s romantic relationship with a Black man, this film really struck a chord for me.

Still in East Africa, ‘The In-Between World of Vikram Lall’ (MG Vassanji, 2003) is one of my favourite books on the subject, well, there are only two I’ve found so far. It follows a South Asian family in East Africa and explores the complexity of African and Indian relations both romantic and otherwise. Kevin Baldeosingh’s ‘Virgin’s Triangle’ (1997) set in Trinidad, follows in part, a relationship between Vishnu and the protagonist Giselle. Under the backdrop of a racially diverse island, this was my first real insight into how things were in the Caribbean in terms of cultural mixing, again something I knew nothing of growing up.

Our own toxicity, our skin colour means that even in Bollywood films – needing a darker toned actor – prefer temporary skin darkening than to just cast someone of the appropriate community or hue, in films such as ‘Gully Boy ‘ (2019), ironically about Hip Hop, ‘Bala’ and ‘Super 30’. Ironically, these films are all advertised next to skin lightening products. For me this speaks of a complex intersection of self hate/shame in our desire for a Eurocentric beauty ideal, as well as a derision for anyone who doesn’t fit with this – trying to position ourselves, literally, closer to whiteness. The film; ‘Fashion’ (2008), shows a South Asian woman Priyanka Chopra’s character, hitting ‘rock bottom’ when she wakes up next to a Black man says it all.

In my own work I’ve explored such relationships, but not without reservation. In prose, I’ve been exploring a relationship between a British Caribbean man and South Asian woman across the 1990s, a time in which multi-culturalism was on everyone’s lips and a sense of hope was in the air. In the past I’ve had worries about how my explorations of this subject matter would be perceived by my own community, but I feel it is vital to address these issues now.

In theatre too there have been very few examples. Yasmin Alibhai Brown famously recounts her story where her, “English teacher, Joyce Mann, produced a racially-charged ‘Romeo & Juliet’ in which the Capulets were Asian and Montagues were African. I was Juliet. Romeo was handsome, black John Obwole.” Despite Brown speaking openly around the issues of Black and Asian relationships we haven’t seen much. ‘Bitched’, (Sharon Raizada, 2011) and Vinay Patel’s ‘An Adventure’ (2019) are the only two I know that explore romantic or friendships between our communities.

In my own work, ‘The Husbands’ (2014), I explore the dynamics of an African man and an Indian woman, in a fictional matriarchal world, through this work I attempted to explore cultural mixing without bringing in the usual issues around racial taboo that haunts a lot of the work I’ve seen.

In my own life, I have of course encountered issues from my community when walking down the street with my husband. We live in Newham, one of the most culturally diverse communities in the country, but I only have to go to the park to experience stares and double takes. At the same time, in my extended family I’ve had very little to contend with, and people have learnt to accept my decision or perhaps talk about me behind closed doors. Despite all these examples, my own parents and brother have always been supportive.

It has been almost 30 years ago since ‘Bhaji on the Beach’, and little has changed in terms of representations between South Asian and Black communities where we prefer friendships with white counterparts more than Black. In contemporary television, there is a distinct preference for romance and friendships. ‘The Mindy Project’ (Mindy Kaling, 2012) and ‘Master of None’ (Aziz Ansari, 2015) both exhibit this clearly. The latter tries but fails, centring whiteness at all turns in season 1 and improving slightly in season 2. Likewise Four Weddings and a Funeral’ (1994) set in a contemporary multi-cultural London with a South Asian man falling in love with a light-skinned African-American woman did little to engage with the issue at all. Netflix’s very recent ‘The Lovebirds’ (2020) does little to further the discussion around these types of relationships.

Our communities are united by a shared outsider experience and the legacy of Colonisation is never too far away as to let us step too far out of its shadows. And yet. And yet, there is a deep sense of anti-Blackness in our communities. This is being called out most especially by the younger generation in the US and also the UK: I’ve been so moved to see that South Asians for Black Lives placards proliferate on socials media and also to see people speaking out about this openly for the first time ever. Posts on how to engage with families, how to stand in solidarity, acknowledge our own privilege but also pain, are all vital in the conversation. The Gandhi Mahal incident – where the owners of the named-restaurant showed solidarity with BLM when their Minneapolis restaurant was set ablaze during protests – reflected hope.

Love isn’t colour blind, but unpacking the reasons why Asian and Black relations of any kind, are lacking in society and art, says a lot about our own issues around our own status and value. It is time we stand in solidarity. And make art that challenges what really matters.

Sharmila Chauhan’s work is often a transgressive meditation on love, sex and power. Her plays include: ‘Be Better in Bed’, ‘The Husbands’ (Soho Theatre), ‘Born Again/Purnajanam’ (Southwark) and ‘10 Women’ (Avignon Festival). Her short films (‘Girl Like You’’, Oysters’) were produced by Film London and her feature ‘Mother Land’ was long-listed for the Sundance Writers’ Lab. She is currently writing a non-fiction book: ‘Sleeping with the Enemy’, an exploration of cross cultural relationships.