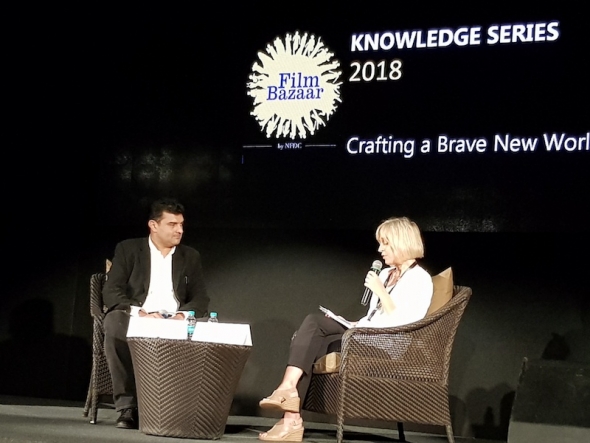 *Urges them to be passionate about project and force the producer to think, what if I do not make this film…

*Confident India will get an international breakthrough film

TOP-BOLLYWOOD hitmaker Siddharth Roy Kapur believes Indian cinema will have its own ‘Crouching Tiger, Hidden Dragon’ film in the next few years.

The producer behind Aamir Khan blockbusters ‘Dangal’ and ‘Secret Superstar’ made the assertion at a Knowledge Series talk at Film Bazaar in Goa yesterday (November 21). Film Bazaar is the market section of the International Film Festival of India November 20-28) and is based out of The Marriott Hotel in Goa, not the Entertainment Society of Goa complex, once the home Goa Medical College and known as the old GMC Building).

In a wide-ranging discussion with Liz Shackleton, the interlocutor, and editor of Screen Asia, Kapur gave a stimulating overview of Indian cinema from the way he makes decisions about green-lighting projects to what the Indian film industry has failed to do – produce a film such as ‘Crouching Tiger, Hidden Dragon’ (Ang Lee 2000) which defies geographical boundaries and sensibilities to become a global hit, making over a $100 million.

‘The Lunchbox’ which is routinely touted as India’s most successful film abroad to date, made around $15 million – very decent but far from globally spectacular.

Kapur said the success of ‘Dangal’ and ‘Secret Superstar’ in China was unexpected – both achieved record numbers and outsold local and Hollywood films to become among the most successful foreign films ever shown there.

Kapur, almost uniquely has experience of three different strands of producing – he has made films for a Bollywood studio, UTV, then worked for Disney when it bought into the UTV and made movies in India – and now runs his own outfit, Roy Kapur Films.

Film Bazaar at The Marriott Goa

He also spoke a little about his latest project – which excitingly pairs US sensation and Bollywood favourite, Priyanka Chopra with Farhan Akhtar, one of the Indian film industry’s most versatile and popular talents.

Set at least partially in London, the two play a couple whose young daughter faces a terminal condition and is not expected to live beyond 18.

Based on a true story, its working title is ‘The Sky is Pink’ and is being made by Shonali Bose, whose last film, ‘Magherita with a straw (MWAS)’, graced the London Film Festival two years ago and starred Kalki Koechlin as a wheelchair-bound cerebral palsy affected young woman who refuses to be defeated by her physical condition and determines to live her life to the very fullest.

Kapur said he was hugely impressed by MWAS, and asked Bose whether she was looking to make a new film.

He told the audience he liked to work with films from ground zero and working up – in other words, reacting instinctively to scripts and stories and seeing how they could be made and monetised.

He spoke at length about marketing and how important it could be for some films to a segment a market and spend modest sums to connect with its possible audience.

Smaller films could still make money, he said, but the marketing spend needed to be appropriate for that level film.

He spoke a little too about the diaspora market – audiences for Bollywood films in the UK, North America and Australasia.

He said increasingly it was a factor, especially in star driven films.

“India is still a star system,” he asserted, countering the idea at least in part that star led films now are all flops.

The difference, he pointed out now, is that today a bad script and story will not save a film simply because it has a major face to it.

And increasingly films with strong content could triumph without a star in it.

He suggested filmmakers could take risks and be both commercially successful and garner critical acclaim.

His backing of ‘Dev D’ an early Anurag Kashyap film proved to fulfil both its commercial and critical objectives, and arguably put Kashyap on the filmmaking map. It was also where vision and execution both for filmmaker and producer were in synchronicity.

And this trend was continuing where unknown filmmakers and actors could emerge.

“2018 has seen the highest theatre footfalls even though platforms are proliferating.

“It has got much more brutal, but if the content is good, it works. Everyone wants good content. Even the small town audience today is exposed to international content and their benchmarks have changed. It’s important that we don’t miss out on this opportunity to make great content. We have an obligation to do so,” he declared.

He stressed it was important for filmmakers to believe in what they were doing and be passionate about their film.

“You need to be convinced and passionate about what you are pitching”, he stressed.

He said once a film went into production, he stepped back from the process, only surfacing perhaps at the beginning and at the very end.

“It’s important to know when to be involved and when to step back. You have to be the yin to the director’s yang. The job of the producer is to stay a few steps removed from the film and be objective.”

Earlier in the day delegates at Film Bazaar heard how the Indian government is simplifying the process of making a film in India for foreign filmmakers.

It has just launched a new web portal – the Film Facilitation Office.

In a session closed to the media but addressing delegates, he said: “The portal takes forward our goal of easing filming in India.

“We want international filmmakers to come film in India and weave India into their narratives.

“This portal will provide detailed information on not just the locations to shoot in but also the remarkable depth of talent in our country. Alongside this information, the portal will also facilitate the process of getting approvals for filming in India’.

Delegates also heard about the latest developments blockchain and how it could applied to the Indian film market.