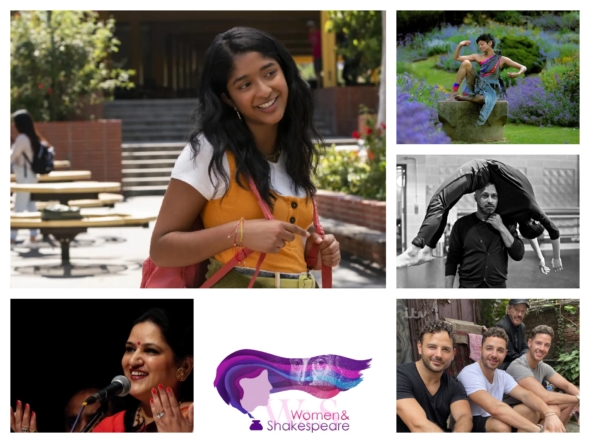 Our round-up of online offerings which may interest you asianculturevultures… some have just dropped and some start in a few hours tonight (UK time) – best seen on desktop or tablet* 🔸Deadline extended to Tuesday 4pm on Tuesday, May 5

MINDY KALING has a new TV series that dropped this week on Netflix.
Called ‘Never Have I Ever’ it centres around ‘Devi’ (Maitreyi Ramakrishnan pictured) a nerdy, gawky 15-year-old high school girl who craves a boyfriend.
A straight A student with a temper and two best friends – a Chinese American and African-American – it is a growing up tale with laughs and learning very much in mind.
Kaling found the cast through an open call on social media and has spoken highly of Tamil origin Canadian Ramakrishnan appearing in a breakthrough role and already being touted as ‘a star’.
The show is based loosely on Kaling’s own high school experiences – and not having a boyfriend either. She said she was also keen to show a ‘desi’ experience of growing up in America – and she hired younger ethnic writers to help with getting the language right.
The 40-year-old single mother said the main character is quite different to her though.
“Devi is decidedly a nerd and so are her friends, but she’s not a wallflower. And I think we haven’t seen that before. I did not have her confidence in terms of me thinking I should be with the hot senior guy. I had none of that – I was a lot quieter than she is.”
Conceived by Kaling and Lang Fisher who helped to script the star’s ‘Mindy Project’ (a 2012 comedy drama centred around a gynaecology clinic in New York and broadcast on US channel, Hulu), Kaling has enjoyed more success with TV than she has with film. Her American take on ‘Four Weddings and Funeral’ with ethnic storyline based in London fared much better than her first feature film, ‘Late Night’. It premiered at Sundance last year and acv found it funny and touching, but the box office was less forgiving and it hasn’t had the impact Amazon may have wished for it after securing rights at Sundance.
You can find ‘Never Have I Ever’ here

CELEBRATING International Dance Day today is Akram Khan Company. Acclaimed dancer and now choreographer Akram Khan’s ‘Dust’ streams on the English National Ballet’s Youtube channel tonight at 7pm and the company tweeted about it earlier.
‘Dust’ was premiered in 2014 to mark the 100th anniversary of the beginning of the First World War and was a collaboration between Khan and Tamara Rojo, the present ENO’s artistic director. The work centres around the role women played during that war as men went to fight.
Khan said he was fascinated by the idea of women making weapons and joining the workforce in large numbers for the first time to fuel the war effort. ‘It didn’t matter which side you were on – they (women on different sides of the war) both felt loss and death. But in order for someone to live someone else was putting their life on the line. That cyclical thing was what I wanted to explore.” You can watch ‘Dust’ here.

HAPPENING also this very evening is Manch UK’s ‘Meet the artist’ talk series with the rather unique Veena Ramphal. The dancer has a PH.D in philosophy and dance and trained with Padma Subramanayam in Chennai. She will be talking about her core practice as a dancer and talking about who inspires her. She will also be performing in the live broadcast at 6pm.
She told acv: “I’ll share the secrets of success that dance has taught me; what the Goddess Roar is about – and the spiritual opportunity I see in the lockdown.”
She is also a life coach and you may have seen on her on the media talk about relationships. She featured on Channel 4’s ‘7-Year Switch’. Watch here. Picture: Irven Lewis Photography

STARTING today is the Bagri Foundation’s new online video series covering ‘The Art of the Ghazal’. It begins with renowned singer and composer, Dr Radhika Chopra (pictured) who will take viewers on a journey through the idea of the Ghazal and her ‘Ghazal ki ki kahaani, Meri Zubaani’ – recorded recently during the lockdown. A form of Urdu poetry and often about love and longing, it remains one of the most popular musical forms to which people listen. New videos will be released each Wednesday and available from Bagri’s social media platforms as well.
“She has been so generous in allowing us into her home, an intimate space, during a difficult lockdown period in India and sharing with us, her musings. We are sure they will charm and entice all our Urdu and Hindi speaking audiences,” said Alka Bagri, Trustee of the Bagri Foundation. Watch here

JUST launched is the ‘Women and Shakespeare Podcast’ – a series of conversations between directors, actors, writers and academics who are involved in making and interpreting Shakespeare.
Coming up is Farah Karim-Cooper, head of higher education and research at Shakespeare’s Globe, and vice-president of the Shakespeare Association of America and the renowned actor, Dona Croll, who was the first black ‘Cleopatra’ on the professional British stage.
The podcasts started last week (April 23) on Shakespeare’s birthday and the first episode had novelist Delia Jarett-Macauley talk about her book ‘Moses, Citizen and Me’ which is based on Shakespeare’s ‘Julius Caesar’. She is also the editor ‘Shakespeare, Race and Performance’. The shows are created and hosted by Dr Varsha Panjwani and her students at New York University in London. She is one of the leading lights in academia who specialises in Shakespeare. For the podcast, go here.

STARTING on ITV (in the UK) is ‘Absolutely India: Mancs in Mumbai’ which airs this evening at 8pm. The three brothers who have a considerable media presence through acting and reality TV explored their Indian heritage.
Sons of Dougie, a music promoter and lead singer of 1970s band Dougie James and the Soul Train, the Thomas brothers go to Mumbai and Goa. There are six 30-minute episodes and in the first, Dad and sons (pictured) look back at Nolan, Dougie’s Dad who left India for the UK in 1947.
Adam, an ‘Emmerdale’ actor said: “Right now especially, I think we could all do with some humour. There are so many layers to this show that I think the viewers will be able to relate to, one minute you’ll be laughing and then next you’ll be crying. It shows that whilst we might not all be perfect we have this amazingly strong family bond which other families can hopefully relate to.” The show was filmed late last year. Watch 8pm this evening on ITV & ITV hub (UK only)

HEADING for our personal screens on Friday (May 1) is Manchester International Festival’s free online, ‘Re:Creating Europe‘, an exploration of Europe through words and featuring Adjoa Andoh (pictured from Richard II) and Lemn Sissay, Christopher Eccleston, Lemn Sissay, Juliet Stevenson and Michael Morpurgo.
Originally presented at the festival in July 2019 and directed by Ivo van Hove, it was filmed at The Lowry in Salford with van Hove’s Internationaal Theater Amsterdam. There also a series of talks and explorations of subjects such as poetry, performance, fiction and theatre as part of the same MIF Live programme. For all this check: http://mif.co.uk

*Depending on the size of your phone screen, the layout may not look as intended – apologies

Privacy & Cookies: This site uses cookies. By continuing to use this website, you agree to their use.
To find out more, including how to control cookies, see here: Cookie Policy
← ‘Bollywood: The World’s Biggest Film Industry’ (BBC TV)- Anita Rani on why she wanted to tell the world…
‘Mulk’ (review) Powerful message of humanity and hope with iconic Rishi Kapoor at the centre of it… →