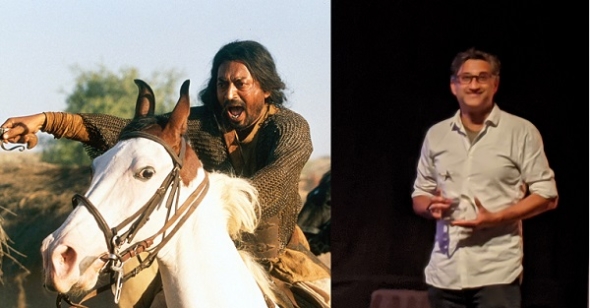 Powerful and moving, the British director offered a great tribute to actor and spoke about his own work to date…

OSCAR-WINNING director Asif Kapadia was on the verge of breaking down and shedding tears as he introduced his debut Bafta-award winning feature, ‘The Warrior’ at the BFI Southbank last night (June 19).

Speaking as part of the London Indian Film Festival’s In Conversation series, he shared memories of the final time he saw the star of the film, Irrfan Khan, in Bombay (Mumbai), just before the pandemic and some time before the star’s sad death in April 2020.

“Amit (Kumar) and I were there when we first met Irrfan…” Visibly moved and unable to go on, Kapadia reached down for his water and the audience started to clap before he composed himself and finished his introduction to the film, which had begun with him revisiting the first time he had met the actor.

During the 40-minute conversation with film journalist Hanna Ines Flint at the BFI Southbank in London, Kapadia also recounted the origins of the film and how difficult a time he and Kumar, another Indian filmmaker, and producer, who helped him make ‘The Warrior’ (2001), had in casting the lead.

“No one understood this film,” Kapadia said of his time in India trying to cast the enigmatic warrior character who takes a young boy under his wing, renounces his previous existence as an enforcer for an Indian feudal warlord and has to escape to the mountains himself to avoid being killed himself.

Khan was a mostly TV actor in India at the time – his realistic style of acting was not much in favour and he did not have leading man looks as Indian cinema convention dictated. He was increasingly disillusioned and unmotivated – until ‘The Warrior’.

Khan’s career took off after it and he starred in many films, both Hollywood and Bollywood, before Neuroendocrine cancer claimed him at the age of 53.

In 2013, Khan himself mesmerised an audience at the BFI Southbank, talking very candidly and intimately about his life prior to his casting in Kapadia’s ‘The Warrior’. On that occasion, Kapadia was the moderator and they were there for the London Indian Film Festival (LIFF) and before www.asianculturevulture.com was in existence as a website.

It remains of the most memorable and outstanding talks acv has been privileged to have heard. It was really as though Khan’s spirit – curious, mercurial and generous pervaded yesterday’s session. ACV interviewed Khan several times.

Flint asked him if he had been approached by others who wanted similar documentaries made about themselves.

Kapadia didn’t name names but responded: “A lot of actors…and who is India’s biggest sports star… a nice guy but not for me…” That would put Virat Kohli, the current captain of the India cricket team in the frame. Kapadia did not elaborate. The director explained that he was not interested in hagiography and that he needed to cover a subject in depth and examine possibly dark aspects of their characters too.

Kapadia also talked briefly about his most recent broadcast work, putting together the documentary series, ‘The Me You Can’t see’, executively produced by Prince Harry and Oprah Winfrey and currently available on Apple TV. The five-episode current series explores the topic of mental health and how silence must be broken to help the healing process and includes interviews with Prince Harry and pop star Lady Gaga, among several.

Kapadia also very briefly mentioned what he is working on at present and was revealed in a tweet earlier this year (see below please).

He also spoke briefly about difficulties with disgraced and jailed movie producer Harvey Weinstein, who bought the rights to ‘The Warrior’ for distribution outside the UK and then tried to force him to sign a three picture-deal with his company, Miramax, and declined to release the film until he did so.

Kapadia refused, and said Weinstein was a bully. Five years after its release in Britain, it did get cinema screenings globally.

The Royal College of Art trained filmmaker also talked briefly about an earlier time in Hollywood making ‘The Return’ (2006) – a genre horror psychology thriller-type film he was commissioned to direct.

“I realised I wasn’t really interested in living in Hollywood, LA. I like living in London and I like being in Europe. It’s a kind of machine, a beast – Hollywood,” he opined.

But it was on the subject of Khan and ‘The Warrior’ that Kapadia was most engaging – and moving – offering what became a very natural tribute to a good friend and truly talented actor and artist.

Flint asked Kapadia to talk about his favourite part of the movie – but without spoiling it for the many who had come to see it for the first time. Kapadia asked the audience how many had and not that many hands were raised.

He named a particular scene in the mountains with the young boy but did not give too much further detail, saying: “This was old school filmmaking (no playback), and it was those kinds of moments, where he (Khan) would take would some lines I had been working on for years and he would just elevate it.

“Remember it was my first feature and it was the first time, I was working with a movie star or a proper movie actor,” he reflected. “It was his eyes.”

Earlier he had explained how he had come to cast Khan.

“My friend Amit and myself were doing everything, we were driving around looking for locations, casting in Delhi, Ahmedabad, and Bombay, and we saw a lot of actors.

“No one really cared.

“They didn’t get it – no one read scripts (at the time), they wanted it narrated (as is still common in Bollywood), and there was this English bloke (Kapadia), with a bad Hindi accent and you could almost see them falling asleep.

He said that most actors were horrified that ‘The Warrior’ meant shooting on location and away from Mumbai and in those days it was still common for actors in India to juggle productions, simultaneously. He told them it had to be a straight shoot of days in the North of India and the Himalayas.

Kapadia continued: “We were in this dodgy hotel in Juhu beach, most actors didn’t even want to come there.

“He (Irrfan) just sat down and he got it – he understood where I was coming from – he had seen films from the around the world, because he had studied at the National School of Drama (in Delhi).

“He had a big world view and I could talk to him about movies.

“His eyes looked sad. He had soul.”

Irrfan Khan – obituary and links to his other interviews with acv
http://asianculturevulture.com/portfolios/irrfan-khan-unconventional-romantic-intelligent-artistic-hero-obituary/

Irrfan Khan at the Jaipur Literature Festival (2014) as part of a panel, ‘Aakrosh‘ – https://youtu.be/PlQNHGqPXNI

Privacy & Cookies: This site uses cookies. By continuing to use this website, you agree to their use.
To find out more, including how to control cookies, see here: Cookie Policy
← Cannes 2022 – Reviews: Triangle of Sadness; Tori and Lokita; Brother and Sister…
Cannes 2022 – Helly Shah, TV star: ‘It’s like a dream, trying to soak it all in; I did almost have a breakdown’ and her ‘Kaya Palat’ launch (video) – picture add (28.05.22) →