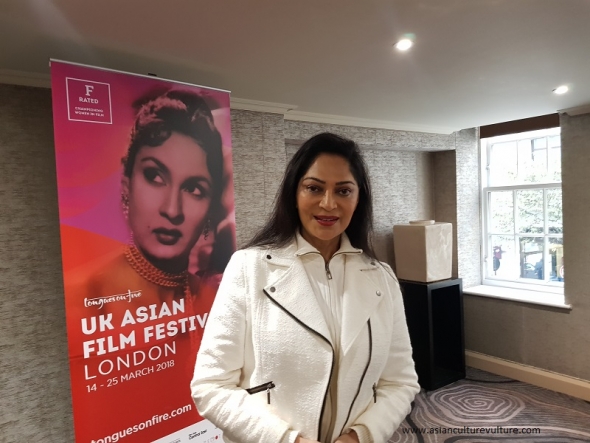 LUMINOUS, bright, ballsy and utterly without artifice, few could fail to be charmed by Simi Garewal at this year’s 20th anniversary UK Asian Film Festival.

The one-time starlet, talk show icon and filmmaker lived up to her billing and some – in a festival that has always highlighted and promoted women in film.

Celebrating 20 years – and originally created as Tongues on Fire and reincarnated several years ago as the London Asian Film Festival, it has now gone national (extending to Leicester, Manchester and Edinburgh) and this year all its films were F-rated, meaning they had a strong female component in the making or the message.

Garewal is among its most articulate advocates and as well as speaking to us about this at the red carpet launch event on March 14 (https://www.youtube.com/watch?v=pEZXqaPIQQo&t), she also spoke expansively about her long career and www.asianculturevulture.com was among the audience for her introduction to the 1972 film, ‘Siddhartha’ in which she starred alongside Indian film legend, Shashi Kapoor.

He died late last year, aged 79 and was widely recognised as one of the icons of Indian cinema.

SImi Garewal speaking after the screening of ‘Siddhartha’

At the screening of ‘Siddhartha’, on March 17, Garewal spoke touchingly about the man she adored as an actor and a man.

Among the audience was Karan Kapoor, Shashi’s London-based son and Janet Rooks, widow of Conrad Rooks who was the director of ‘Siddhartha’. Karan told the audience he had not seen the film before or at least he had no conscious recollection of it.

“I was only about six or seven when Dad made it, and tomorrow is his birthday – what great timing,” he revealed.

His brother Kunal features in the film as the central character Siddhartha’s son from his on-screen relationship with Garewal, who plays the mysterious and beautiful courtesan, Kamala.

Dr Pushpinder Chowdhry, co-founder of the festival, looks on

Mrs Rooks revealed that her husband, Conrad, put all his own money into the film and had to travel to Switzerland to meet the Hesse family who owned the rights to the book.
The day before the screening, Garewal spoke to www.asianculturevulture.com and three other journalists from UK-based media.

The day before the screening, Garewal spoke to www.asianculturevulture.com and three other journalists from UK-based media. Below are the excerpts from both her introduction to ‘Siddhartha’ and her near hour-long chat.

Introduction to screening of ‘Siddhartha’

♦Simi Garewal reminisced about her time with Shashi at the Venice Film Festival in 1973 and how he reacted after the film was awarded a Silver Lion.
“There was a standing ovation, wave after wave. Later we got on a gondola, and all these people seeing the handsome Shashi started singing his old songs – of course he could not sing (in Bollywood, the songs are sung by well-known musical artists and only lip-synched). He was so happy and carefree – that’s the image I keep in my mind of him.”
“He used to work in commercial films and take all the money he earnt there and put it into memorable, meaningful films such as ‘Junoon’ (1979), 36 Chowringhee Lane (1981 and in which Shashi’s wife Jennifer Kendal starred. She died in 1984 and people often remark that Shashi never really was the same).

♦Shashi was instrumental along with his wife in creating Prithvi Theatre in Juhu, Mumbai. It is one of the best recognised artistic institutions in India today.
Garewal on Prithvi Theatre: “It is the hub of aspirational talent and it throbs with life and talent. Even now when I go there, it moves me a lot. It is his real breathing legacy.”
“He (Shashi) led his life with great dignity. He had beauty without vanity, and success without arrogance – something very rare.”
She remembered the last time she saw him in Mumbai, and his daughter had warned Garewal that her father may not recognise his friend and one-time co-star. She explained her father had had a stroke and was not in good health and was in a wheelchair.
“I just went to him and gazed down at him and then he looked up at me and he said: ‘Hello, Simi’. I felt like laughing and crying. It was my last and first memory and it is very precious.”

♦In her conversation with www.asianculturevulture.com, she revealed her hugely successful talk show, ‘Rendezvous’ will return to the screen sometime before Diwali 2018.
She has also written a feature script with some present Bollywood talent in mind and hopes it will go into production in 2019.
She also disclosed she has been writing a TV series which she expects to show on a digital platform.
“I’ve just finished it, it is a mega mega script and I’ve spent two years writing it.” She declined to go into any detail about it.

♦She said her own website (see link below) is very frank and honest.
“It’s just not the goody goody stuff, everything is there (including two major relationships that did not work out).”

♦On being cast in ‘Siddhartha’.
“We had gone to a function in Lucknow and we were flying back and the Indo-Pakistan war (1971) had just broken out, we were flying low and there was a complete blackout in Delhi and when we got to the airport it was announced ‘Urgent call for Simi Garewal’. I was worried. It was Conran offering me the part.”
“I had read the novel (‘Siddhartha’) when I was about 16/17, at that age, you want to know what life is about, what lies ahead and I identified with the search.
“I enjoyed it, so when someone says you can enact that book, it’s like winning a prize, I was delighted.
“It is still read on both philosophy and literature courses, especially in the US and the film is played in college towns.”

♦Her favourite film is the documentary she made for Channel 4 on Rajiv Gandhi who was India’s prime minister 1984-1989 and like his mother, Indira, was also assassinated.
“We were with him nearly the whole four and half years. It really stands out and was a glorious experience. I learnt so much.
“Let’s leave the politics aside, to know someone as a human being, to get to know such a refined, kind, empathetic gentleman, even though he was PM, he was always a gentleman. He would open the door for me and offer to carry my bags; it’s just not done, prime ministers don’t do that.”

♦She would love to interview Sonia Gandhi, who in 2004 led the Congress Party back into government.
“I admire her. I love her story. She was born in small town Italy and goes onto rule India. She is such an admirable and dignified person – look at the transformation.
“When we were doing the documentary about Rajiv, I asked about Sonia, but he said ‘she is so shy’, she would quiver – if that isn’t inspiring I don’t what is, as women as we don’t know what we are capable of, we get stronger.”

♦She said her most memorable interview in some ways was Jackie Chan. The Hollywood star revealed he had got married because his girlfriend at the time was pregnant.
“It threw me, only because he was so honest, even his assistants didn’t know. In his autobiography, it’s different. He told me to camera, he was a bad boy.”

♦Her own hand at making a fictional feature film proved extremely difficult. She wrote and directed ‘Rukshat’ (1988) with Indian star in Mithun Chakraborty in the lead and the film shot partly in the US and India. She said both her assistant and choreographer on the film went missing – usually in the bar.
“Murphy’s Law (in which everything which can go wrong does) was hovering over me from the day we started filming right to the end, whatever could go wrong, did. It was a test of fire and brimstone. Never again, I prefer making documentaries.”

♦Much of her early life was spent in Twickenham, south London. Her father who was in the army, was a military attaché and she faced early resistance to what was a long-term ambition to act (from the age of about six or seven).
“He was only happy when he knew I was working with Raj Kapoor (his epic ‘Mera Naam Joker’) and Satyajit Ray’s ‘Days and Nights in the Forest’ (both 1970). He told me: ‘That’s really good, you’ve done something with your life.”

♦In her own words and designed by Simi Garewal herself
http://www.simigarewal.com/