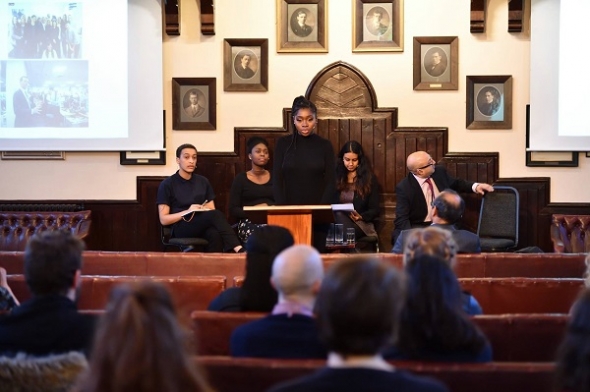 ENCOURAGING and supporting the work of both emerging and established Asian and black artists and giving them a louder voice is vital, if Britain is to achieve an equitable diversity in the arts.

This is what a panel, drawn to discuss the issue of diversity in the arts, concluded.

ACV editor Sailesh Ram was part of the panel assembled by the Cambridge Union University to debate how Britain gets the arts to better reflect the diversity of the nation.

Much of today’s TV and film remains white in appearance and tone – and even where diversity is better reflected in theatre perhaps, there are still gaps and absences that need addressing.
The other panellists invited to speak at the world famous debating society on this topic were Saskia Ross, founder of the Cambridge BME Theatre Group; Tobi Oredein, editor and founder of Black Ballad, a lifestyle website for black and mixed race women and Fopé Jegede, prize-winning poet and third-year Literature student at the university.

Both Oredein and Ram made short presentations and discussed the experiences of their work in the arts.

Oredein said the online space had opened up a greater diversity and had enabled her to connect with others working towards similar or the same goals. The mainstream also better understood what she was trying to do with websites like Black Ballad, and it was not the only one.

Ram said too much of the time ethnic communities marginalised themselves inadvertently and that www.asianculturevulture.com was created as a platform and a spotlight for work by Asian and non-Asian artists, which had wider resonances but often failed to get attention from mainstream outlets. He stressed that it was not just about the ethnic profile of artists – but the work itself and whether it had relevance to minority communities or was part of deeper cultural conversations.

Ross spoke about her experiences in the world of theatre and trying to recruit potential actors and how difficult it was when many lacked confidence or belief in their own ability. She also said her first writing efforts did not incorporate any black characters and she was not conscious of this, until she actually analysed her work.

Jegede described her experiences and said many were still not sensitive to the needs of minority students who wanted a more inclusive and diverse curricula – that was more attune to the modern Britain of today.

The panel agreed, more or less, that it was better that change came from those at the top and in power, but recognised that those in privileged positions might not be willing to share or even give way to those trying to get up the ladder behind them.

A lively Q&A session followed the panel discussion and the audience welcomed the debate initiated by Wijeyeratne.

Sailesh Ram adds: It was a hugely enjoyable and interesting discussion and I was inspired by the three women and their spirit and willingness to challenge the status quo and encourage diversity in their respective endeavours. We can only improve the situation by talking about it – even arguing about it. Change does not come from being silent but winning hearts and minds and pushing forward an agenda of equity, respect and inclusion. Long may it continue…special thanks to Maya for organising and initiating an important and absorbing debate which the audience responded to and gained insights from the panellists.

The panel discussion took place on March 14 at Cambridge University.

All photographs by Chris Williamson and courtesy © of Cambridge Union.

Privacy & Cookies: This site uses cookies. By continuing to use this website, you agree to their use.
To find out more, including how to control cookies, see here: Cookie Policy
← Famous war correspondent and Malala biographer Christina Lamb to open Asia House lit fest and Nadeem Aslam to close with emphasis on women writers
Baahubali team comes to London – director SS Rajamouli and star Anushka Shetty on global smash film →