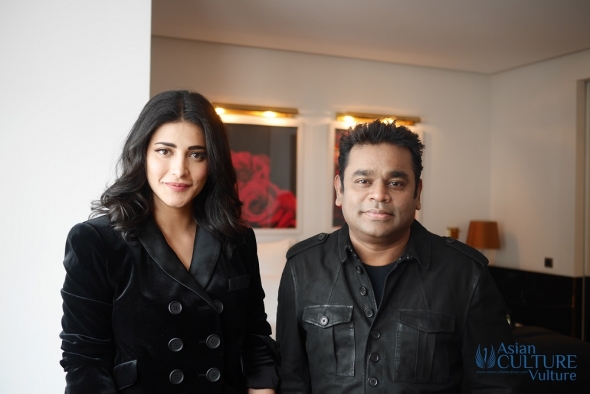 SOUTH Indian cinema has arrived. In Cannes, in 2017.

AR Rahman and Shurti Haasan – perhaps the two best-known figures outside India behind the ‘Sangamithra’ project spoke to us at some length about it today.

It is an 8th-century epic that will tell the tale of a princess called ‘Sangamithra’ – Haasan clarified that it is not about Emperor Asoka’s granddaughter.

The princess Haasan will play is a mythical fictional figure inspired by Tamil tales of yore. She is a strong woman and Haasan initially said there were few parts that played to a women’s strength.

Hassan is certainly excited about the role and Rahman told us that the passion, and talent of the filmmakers in question made it a project he wanted to give his own heart and soul to as an artist.

Well-known Tamil director Sundar C told www.asianculturevulture.com that he wanted the two male protagonists Jayan Ravi and Ayra for the roles not as stars per se (as they are both in the South Indian film industry) but as actors and men who could embody a certain warrior spirit and ethic.

You can hear AR Rahman, Shurti Haasan, Sundar C, Jayan Ravi and and film producer Hema Rukmani telling www.asianculturevulture.com on Youtube (video interviews here in Cannes) why they are making such a film and their ambitions for it.

Bringing it to Cannes was a bold move and one they said was inspired by the global success of ‘Baahubali’ – which has opened doors for the South Indian film industry as a whole, they feel.

This South Indian blockbuster made in Telugu has now smashed all previous Indian film box office records. It is, as we have consistently maintained, not a Bollywood film – it has no Indian wide recognised stars in it – at least when the first instalment went out in 2015.

Now actors Prabhas and Rana Daggabuti and director SS Rajamouli are household names in India and among the diaspora.

Thenandal Films, the backers of ‘Sangamithra’, is making its 101st film and Rukmani said the plan to bring it to the Cannes Film Festival was to sell it to the international film industry.

Privacy & Cookies: This site uses cookies. By continuing to use this website, you agree to their use.
To find out more, including how to control cookies, see here: Cookie Policy
← ‘The Perfect Candidate’ (review) – humour and subtle political commentary on women’s rights in Saudi Arabia… (London Film Festival 2019)
Baahubali onstage Q&A at Royal Albert Hall… director SS Rajamouli and team: ‘Support us and we will try and give you more’; MM Keeravaani sings… (video) →