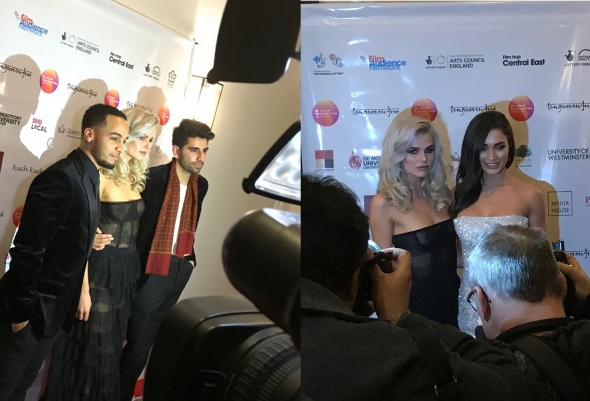 SO, THE CURTAIN on the UK Asian Film Festival came down with quite the flourish – not only was there dancing in the aisles with the closing gala film, ‘Boogie Man’ but the festival awards were also handed out on a starry, starry night again.

The man behind the Pakistani film, ‘Cake’ – which releases on Thursday (March 29) – Asim Abbasi walked away with the best director award. ACV special presenter Attika Choudhary who featured in a Pakistani film last year, was on hand to collect the award on behalf of the director.

The Audience Choice Award went to ‘DHH’, a film about a magician (played by the iconic Indian star Naseeruddin Shah), who helps three boys through their exams.

The best actor award went to Sushame Deshpande for her role in the hard-hitting rape revenge drama, ‘Aaji’ (‘Granny’).

One of the most popular films on the festival ‘Tikli & Laxmi Bomb’ about Mumbai’s ladies of the night taking control and fighting back saw it win the Gender Equality Award at the festival. It featured a nearly all-female crew and though directed by writer Aditiya Kripalani from his own novel of the same name, it’s a film told from the female perspective.
Unusual and intelligent ‘The Summer of Miracles’ saw engineer turned director Prasanth Vijay nab the Best Director Debut Award.

The festival which started out as a female orientated affair, and was originally known as Tongues on Fire marked its 20th year and made sure all the films that screened this year were F-rated. This is increasingly an industry grading (recognised by IMDB.com, the film data website), and meaning the films are made by women or a majority of women and/or have a strong angle of gender equality.

Short film competition winner was Sharmin Ahammad for her ‘The Toothless Tiger’.

The closing gala film of UKAFF in London (it continues in Leicester, Manchester and Edinburgh until March 31) is the debut directorial effort of Andy Morahan, who is well-known for his music videos.

SImi Garewal speaking after the screening of ‘Siddhartha’

Featuring Bollywood pin-up – our own Amy Jackson and JLS frontman Aston Merrygold in his first film, ‘Boogie Man’ is a feel-good, foot-thumping nostalgia ride, partly inspired by the music and clothes of London in the 1970s.

The first couple of days were dominated by Mahira Khan, the Pakistani-born actor, who got her break in Bollywood alongside icon Shar Rukh Khan last year. She proved a popular draw and travelled to Leicester for the festival and a screening of ‘Verna’ in which she plays a rape victim before returning to a London screening and briefly introducing it before leaving the UK.

One of the undoubted highlights of the festival was the contribution of Simi Garewal. She introduced her film ‘Siddhartha’ at a festival screening and shared many of her thoughts and experiences with such legendary figures as Raj Kapoor and Satyajit Ray. A star in the 1970s, she became known to a later generation as a talk show host who interviewed many Bollywood and Hollywood stars. You can read about her talk with www.asianculturevulture.com and her introduction to ‘Siddhartha’ here.

Seen our interviews from the closing…?

#dancingqueen @iamamyjackson shows us her favourite disco move 💃🏻 The Brit-Bollywood actress stars in @andymorahan’s #Boogieman which had its #worldpremiere on Saturday night @ukasianfilmfestival – but what move did she demonstrate when @the_craftcafe asked her the all important question? Take a look… #amyjackson #ukaff #redcarpetfashion

You’ve seen him singing in @JLSOfficial dancing in @bbcstrictly but how does he fair as an actor? @TheCraftCafe nabbed @AstonMerrygold at @cometoUKAFF World Premiere of his debut movie #BoogieMan to find out…🎬🕺🏾 pic.twitter.com/uusmE9XIdQ

It ain’t over til it’s over! There’s still time to catch @cometoUKAFF in Manchester, Leicester & Scotland @phizzical from @cometoUKAFF has all the info (& the best closing night outfit!) 🎥 #UKLAFF pic.twitter.com/plkSfSsouC

Attika collects award on behalf of Asim Abbasi for ‘Cake’

Seen our video of the opening night?