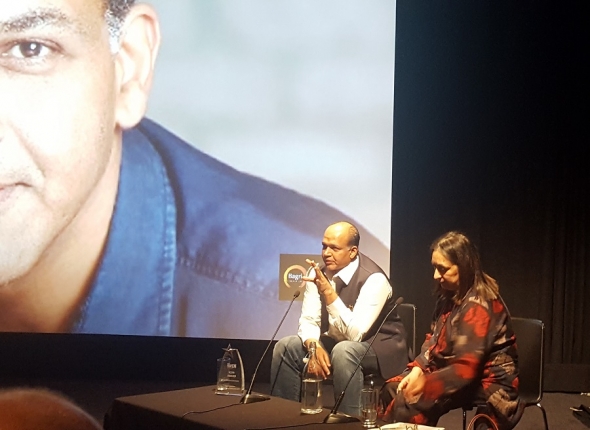 SUPERSTAR director Ashutosh Gowariker said it took a phone call from Bollywood/Hollywood hotshot Priyanka Chopra to finally tempt him back into acting.

The director – best known internationally for ‘Lagaan’ – which was the Indian first film to be reach the final shortlist in the foreign language category for 44 years – made the revelation at a special in conversation with critic and film programmer Nasreen Munni Kabir at the British Film Institute (BFI) Southbank, as part of the London Indian Film Festival (June 22-29).

Speaking on Friday (June 23), he said that it was while making his last film ‘Mohenjo Daro’, he was approached by Marathi filmmaker Rajesh Mapuskar.

“I told him I had given up (acting),” narrated Gowariker.

He had started his working life in films as an actor, having got the bug while at college in Mumbai and last appeared in a TV series called ‘CID’ (2006-2009).

“But he (the director) said there is something in it you might like. When I read the script, I realised he wanted me to play a filmmaker.”

Yet Gowariker still did not commit and Mapuskar pursued him with constant positive text messages for six months and then revealed he had a rather unusual producer.

“Priyanka Chopra – she is just about the biggest star in India, she is in ‘Quantico‘ (a US TV series)” continued Gowariker. “She called me up and said you have to do this film as an actor.”

She also told him that they had appeared in a film together many years ago and “he could not say no”.

The film ‘Ventilator’ went onto be a considerable success last year and garnered much critical acclaim too – winning several national awards.

Just before the trailer of the Mararthi language ‘Ventilator’ was screened, Gowariker said the charm and premise of the movie was quite simple.

The head of the family, a 90-plus year-old man is ailing and has to be put on a ventilator in a Mumbai hospital and his whole extended family assemble from different regions to support him.

“They come from all parts and have to get to know each other,” Gowariker revealed.

In our red carpet interview at the opening gala on Thursday (June 22), he describes the acting experience to acv presenter Momtaz Begum-Hossain as “beautiful” and at the talk, he said he was pleased he had relented on appearing in front of the camera and stressed that his style of acting worked for the film.

“I am a subtle, natural actor – when the director first approached me, if he expected histrionics, I was not the guy.”

Gowariker is also much admired for the fact that he has worked with three very iconic and hugely popular male film stars in Bollywood – Shah Rukh Khan, Aamir Khan and Hrithik Roshan and has had a considerable influence on helping each to achieve that status.

He is widely regarded as having drawn the best performance out of Shah Rukh Khan in ‘Swades’ (2004) and his pairing of Roshan and Aishwarya Rai Bachchan in his historical epic ‘Jodhaa Akbar’ (2008) still resonates to this day. The film gets a BFI screening this morning at 11.30am.

His casting of Aamir Khan in the lead role in ‘Lagaan’ helped put the actor and director in a place few other Indian creatives had gone in contemporary times.

Quizzed by Kabir on the Oscar nomination experience, he said he could not go into huge detail as a member of The Academy (which votes).

He revealed Aamir and he had no plan but decided they would talk to as many people as possible about the screenings and encourage them to see the film.

At the first screening, he learnt only three people had turned up – but their efforts to promote the film were successful – with the final third screening playing to a capacity audience of 120.

“The buzz had got around, everyone who had seen the film had told others and 17 had seen the second screening. The nomination felt like a great achievement.

“I was at Aamir’s house when we heard and whatever dance we could perform, we did,” he disclosed to chuckles from the audience.