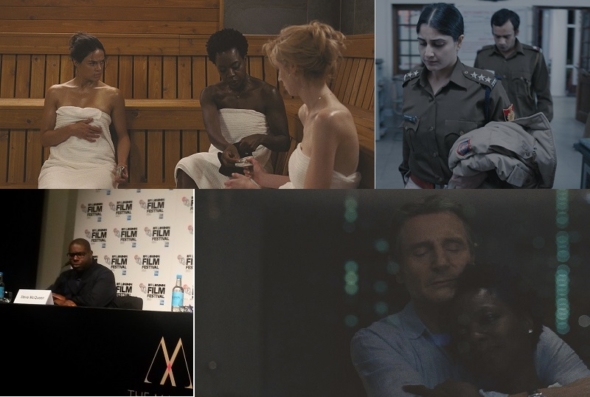 Academy-award winner and Brit Steve McQueen’s star-studded gangster heist film is an exciting ride and takes the original Lynda La Plante UK 1970s TV series up a few notches – and then some.

Viola Davis is sparkling as the wronged widow and gets tremendous support from Michelle Rodriguez, Elizabeth Debicki and Cynthia Envo.

Transplanted from the Badlands of London to the tough streets of Chicago, McQueen isn’t afraid of getting his hands dirty and draws the dots between a political elite, money, power and turf wars.

There are terrific turns too from Colin Farrell and Daniel Kaluuya whose character is both one of the most menacing and most engaging you will see this year.

Screen legend Robert Duvall plays an elder statesmen with a vicious tongue and dubious line in ethics, while Farrell plays his more world weary son looking for the hit that will deliver him from the shadow of his father and perhaps a different path of glory than the one being offered to him as a politician.

There are a few twists and turns along the way, but it is exhilarating, pulsating and almost perfectly riveting in McQueen’s hands.

We will be covering the films from South Asia and looking at those made on the sub-continent.

Nandita Das’ ‘Manto’ is sure to attract attention and is reportedly sold out.

In the wake of recent MeToo allegations that have exploded in India, Das, a well-respected actor, director and social activist will now doubt say that some of the fissures the writer
Sadaat Hasan Manto first identified in the 1940s and Partition are opening up and threatening a new type of conflict.

Fearless and possibly a shameless controversialist with a clear political and social agenda, Manto’s voice adds to the rich cacophony that seek change and call for justice and social and gender equality.

Das who has described her film as an anthem of resistance breathes a new urgency and poetry into Manto.

Played by one of India’s finest actors, Nawazuddin Siddiqui, the cult of Manto has been revived and the quality of UK-based Nasreen Munni Kabir’s English subtitling of Manto’s original Urdu has been hailed by some as a considerable achievement.

Elswhere, Leena Yadav who scored big with ‘Parched’ in France and the London Indian Film Festival in 2016 comes with the intriguingly titled, ‘Rajma Chawal’ (meaning literally, kidney bean curry). Sadly it looks like one of her star actors will not be travelling to London for the world premiere. Rishi Kapoor is in New York for check-ups, the star revealed on social media. Very much about the here and now of Facebook, dating and parents’ expectations, it promises rich comedy.

Also looking to making something of a splash and perhaps ever more poignant in light of the revelations about sexual harassment in India, comes ‘Soni’.

A cop drama by debutant director Ivan Ayr, it pits two policewomen trying to do their job of protecting women from molestation and casual harassment on the streets of Delhi, against their seniors who are more committed to the whims and demands of their political masters.

Horror is not much of a genre in India but ‘Tumbaad’ may be set to change all that.

From Sri Lanka comes ‘House of My Fathers’ , a fable about a divided community, war, and relationships between the oppressed and the oppressor and women and men, respectively.
‘Namdev Bhau’ sees a man tired of the travails of Mumbai retire to the countryside but not everything goes to plan in Dar Gai’s film.

Check listings from our first preview.
Review of Widows here