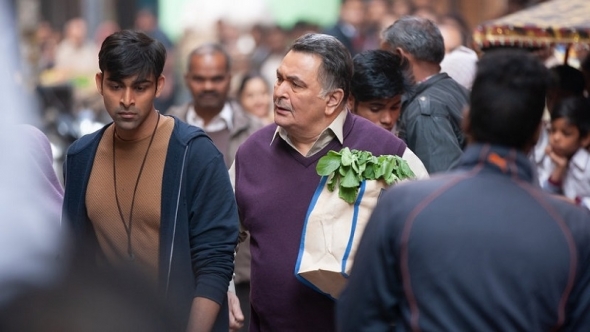 As always, there’s an interesting and eclectic selection and some really caught the eye…

THERE’S a strong likelihood that one of the legends of Indian cinema – Rishi Kapoor – will be heading to the the capital for this year’s London Film Festival (LFF).

There are five features from India – and one of these is ‘Rajma Chawal’ – and it stars Rishi Kapoor.

Kapoor has been in more than 50 films and is a bona fide Bollywood superstar. He hails from the famous Kapoor family and both his father (the late Raj) and son (Ranbir) are also huge Bollywood names, past and present.

Rishi Kapoor has described ‘Rajma Chawal’ as a “special film” and it’s billed by the BFI as a “romantic comedy”.

Kapoor plays a father who hijacks a dormant Facebook profile of an attractive girl to start talking online to his son (Kabir) with whom his relationship is somewhat strained, especially following the death of his wife and Kabir’s mother.

What Kapoor’s character and friends, who encouraged him down this path, never countenanced is the actual girl meeting his son! What ensues promises fireworks!

It’s directed by Leena Yadav whose ‘Parched’ was a big hit internationally, but is very different in tone and style to her latest film.

Originally, ‘Rajma Chawal’ was to be released tomorrow (August 31) in India, but the latest media reports state it had been indefinitely postponed.

Now – we can see why, possibly…

Another Indian film already making stir is a ‘Soni’.

A first feature by a director called Ivan Ayr, it’s in contention for a prestigious First Feature Award at LFF. The film is about to have its world premiere at the Venice Film Festival on September 6.

It’s the story of a Delhi female cop (Soni) who is on the frontline of tackling sexual violence and runs into problems with her boss, Kalpana. Kate Taylor, in the LFF brochure states: “As Soni and Kalpana work together to fight a surge of violent crimes against women, Ayr’s insightful film explores the limits of management, mentorship and sisterhood”.

Another film that is also in Venice and has just had its world premiere (August 30) is the fantasy-horror flick, ‘Tumbbad’.

It’s directed by Rahi Anil Barve and Adesh Prasad and is a dark period piece that explores myth, fantasy, greed and religion.

It’s produced by Sohum Shah, who is also the lead actor, and a known name in Indian cinema and backed also by Aanand L Rai of Colour Yellow Productions, which has been behind a string of successful movies, straddling the populist Bollywood line and the more maverick and independent streak of successful filmmakers such as Anand Gandhi, who is cited as one of the co-writers and whose film ‘Ship of Theseus’, which screened at LFF in 2013, is edited by Prasad.

‘Namdev Bhau in search of silence’ is also another film from India.

This is a second feature from a director called Dar Gai and centres around a chauffeur who’s had it with Mumbai and its constant cacophony.

Namdev retreats to a mountain region, but finds the locals are not much better than the boisterous and unforgiving family he has left behind.

Sawhney says of this film, that it “confirms her (Gai) as an exciting new voice in contemporary Indian cinema, delivering a beautiful portrait of an old man who is tired of life and sick of pretending otherwise”.

Also making its way to LFF is the much talked about and global festival favourite, ‘Manto’.

Namdev Bhau in search of silence

A second feature by well-known Indian actor turned director Nandita Das, it’s the story of one of the greatest writers from the sub-continent.

Saadat Hasan Manto wrote in Urdu and is revered to this day, both in Pakistan (to where he emigrated) and India (where he was born and lived much of his life).

A journalist, short story writer and later screenwriter, he wrote unflinchingly about Partition and the strife and mayhem it brought.

This film enjoyed its world premiere at the Cannes Film Festival in May.

We have interviews with creator Nandita Das and Nawazuddin Siddiqui the lead actor who plays Manto in the film. These will appear shortly on our Youtube channel – please subscribe and you won’t miss them.

There is also one Sri Lankan feature film – ‘House of My Fathers’ is a surreal, and powerful tale about divided communities. Told from a strong female perspective, the film explores the countours of conflict between the Tamil and Sinhalese which wreaked such horrors on the idyllic island nation.

House of My Fathers

At the media launch this morning at Cineworld in Leicester Square, London only ‘Soni’ got a mention as one of the films vying for the First Feature Award. A clip was shown also and you can see it here (scroll to middle of page).

The Festival opens on October 10 with Oscar-winning director Steve McQueen’s ‘Widows’ and closes with ‘Stan and Ollie’ featuring Steve Coogan and John C Reilly reprising the main roles. Among the headline galas are ‘The Favourite’ (Yorgos Lathimos); ‘Beautiful Boy’ with Academy Award winner Steve Carell and rising British star, Timothée Chalamet in the lead roles, in a father and son story about addiction, recovery and relapse.

Tricia Tuttle, BFI LFF artistic director said that the festival overall had looked to showcase the work of woman filmmakers in all the competition categories. At least 30 per cent in each category is represented by women filmmakers. She also said that LFF was keen to cover diverse stories from a diverse world.

The audience first heard from Amanda Nevill, BFI chief executive, who thanked sponsors and organisers for their dedication and passion.

For the full programme and LFF listings for the above films, go to: https://whatson.bfi.org.uk/lff/Online/default.asp

Public booking begins at 10am on September 13

Privacy & Cookies: This site uses cookies. By continuing to use this website, you agree to their use.
To find out more, including how to control cookies, see here: Cookie Policy
← Film stars Ayesha Omar and Yasir Hussain on the red carpet, while UK rising talent dares to dream as 24th UK Asian Film Festival gets under way…
‘DI Ray’ – New ITV cop drama starring Parminder Nagra and written by Maya Sondhi, star of ‘Line of Duty’… →