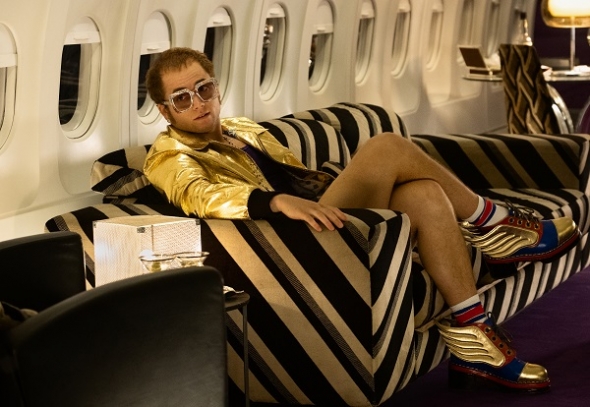 Biopic had a starry world premiere at the Cannes Film Festival, but what of the film itself…

THIS is a really enjoyable film about how Reginald Dwight became Elton Hercules John and which was shown Out of Competition at 72nd Cannes Film Festival (May 14-25).

It begins with a man in a red devil/angel outfit rushing into an alcoholic anonymous meeting and announcing: “I am an alcoholic, cocaine addict, sex addict and bulimic.”

We then flashback into Dwight’s life as the lonely young boy in Pinner (north west London) looking for his father Stanley’s (Steven Mackintosh) hug.

A special mention for Matthew Illesley who is tremendous as the young Reggie, while Taron Egerton is superb as the adult Elton and Richard Madden is great in his role as the grasping business manager and lover, John Reid – shedding his sexy ‘Bodyguard’ (BBCTV 2018) image, while Jamie Bell makes a sensitive Bernie Taupin, the lyricist and long-time collaborator with Elton John. The duo’s relationship is shown with warmth and the visualisation of ‘Your Song’ epitomises it to great effect.

I do not know much about Elton John’s private life, although parts have been well documented but I have certainly enjoyed his music which has punctuated many lives – and this is how director Dexter Fletcher, and choreographer, Andy Murray use the songs in this biopic.

The story is told in an episodic style with every song illustrating a different aspect of Elton John and how the songs are choreographed in these scenes is absolutely brilliant.

Sequences of his early life are shown to, ‘The Bitch is Back’, teenage years to ‘Saturday Night’s Alright for Fighting’.

We fast forward to him performing on the pub circuit, backing soul and RnB artists (like the Isley brothers, Patti La Belle and others) and being advised “you have to kill the person you were born as in order to be the person you want (to be)”.

This he duly does and later goes on to wow America playing his breakthrough concert at the Troubadour to the track,
‘Get back Honky Cat’ and Egerton can really sing.

We go on a roller coaster world tour with ‘Pinball Wizard’ and the film ends with ‘I’m Still Standing’, and there is a lovely scene where he finally comes to term with his inner Reg and has to hug him (spoiler alert) and this made me well up.

Written by Lee Hall with flamboyant costumes by Julian Day (also of ‘Bohemian Rhapsody’ – it is said that over a million Swarovski crystals, 64 costumes and 20 pairs of glasses were used in this film.)

This is an emotional and uplifting rollercoaster film with lots to recommend it – whether it be the music, the story of the ‘strange’ (to those in authority – but not all) kid making it, or just a slice of pop history presented in a very entertaining upbeat and informative way.

Look out for Egerton to be nominated for best actor awards through 2019-20. An Oscar nomination seems a dead cert at the very least.

See our red carpet footage (focusing on Bollywood stars who attended the Red Carpet on May 16 2019 in Cannes).

Suman Bhuchar saw ‘Rocketman’ for www.asianculturevulture.com at the Cannes Film Festival on May 17.