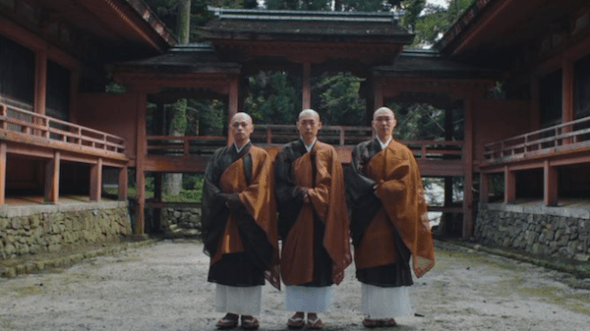 Just a quick update from here

‘Crows are White‘ – This film by Ahsen Nadeem is an engrossing watch – not least because the filmmaker himself is quirky, quixotic and funny.
A video journalist by background he told us in a short interview yesterday (October 12) after his film’s first screening that he had intended to make a film about these Japanese monks who live up a mountain in North Japan and seek enlightenment by shutting themselves off from normal life and doing things like not talking to anyone for seven years and walking every night the length of a marathon. Indeed, Nadeem’s film starts in North Japan, but ends up somewhere quite else and there are two parts to ‘Crows are White’ – one is still the monks and a young one befriends – who speaks good English – and whose own journey we get to follow – the other and perhaps the more pressing part of the film is, how does he break it to his traditional Pakistani origin Muslim parents that he has fallen in love with a non-Muslim and return to Ireland where they still are and where he was raised. This is still seeking distribution when we last spoke: rewarding, absorbing, and quite original.

The Cloud Messenger – The same could be said of Rahat Mahajan’s first feature film – mixing Hindu mythology, and philosophy with ancient Indian dance (which itself is derivative of faith and belief), he produces a contemporary tale with deep echoes from the past.
Shot in the Himalayas, he told us he has spent quite a few years putting this film together and it is definitely worth seeing, if you are interested in any of the above. Even if you aren’t the setting and the traditional dance have a mesmeric, spooky quality. The two leads are also particularly good in this tale of young love.

Faraaz – What to do when a filmmaker you like Hansal Mehta (‘Aligarh’) makes a very different kind of work you have some issues with?
Based on the horrific terror incident at the 2016 Holey Artisan Bakery in Dhaka, Bangladesh, in which more than 20 people died, this is produced as a rather standard run of the mill thriller. It is well done on that level but when you name a film after someone, you expect the film to be about them – ie Faraaz, a well-to-do student who has been recognised for his bravery and courage that terrible day. Yet we see more from the terror gang’s perspective and the leader is the charismatic, magnetic figure that the camera loves more… Mmm. Disappointing, though if you like terror films of this type it might still be quite satisfying.

Creature – World premiere is on Saturday (October 15). This Asif Kapadia-Akram Khan film is loosely based on the work Khan made for the English National Ballet and features ballot performers. We will carry more soon!

Empire of Light – Can Olivia Colman do anything bad? Probably not. While this has been met with some mixed reviews, it is about something – racism in the 1980s, among a few other substantial things. Yes. Worth it.

We will be writing more about all these and some of the other films we have watched – including the above – in our round-up and if there is further news on them. ‘Declaration’ by Mahesh Narayanan which showed last week has just been snapped up by Netflix. We have a video interview with Narayanan shot last week at the festival and will be out shortly on our Youtube channel.

Check listings to see whether these films can still be viewed (some features are available digitally too) – https://whatson.bfi.org.uk/lff/Online/default.asp

**We will add more pictures to this page…

Privacy & Cookies: This site uses cookies. By continuing to use this website, you agree to their use.
To find out more, including how to control cookies, see here: Cookie Policy
← Afghanistan documentary scoops Bafta TV – filmmakers make heart-rending appeal, while Steve McQueen triumphs and Majumdar beats Diversity drum
‘Kekee Manzil: House of Art’ – World premiere of documentary that looks at modern Indian Art at UK Asian Film Festival (video) →