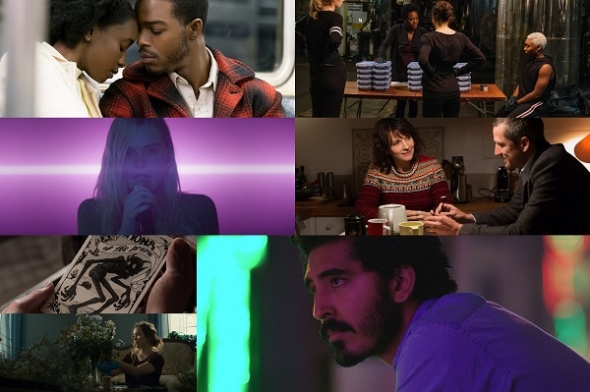 The Wedding Guest
DEV PATEL and Radhika Apte make for an intriguing pair in this unconventional Michael Winterbottom road trip film, which travels from rural Pakistan to Goa, via Amritsar and Rajasthan. The pair made the actual journey and when the film premiered in Toronto on September 8, Patel said sometimes he completely forgot the camera was rolling.
He plays an unnamed character while Apte’s is more located in the story with roots in Pakistan and friends and memories of good times in India. Both her and Patel’s characters are British. The wedding referred to is her character’s in Pakistan – Patel turns up unannounced. Apte isn’t wholly upset by his presence – what happens afterwards is both comic and dark. You can see why Patel was drawn to produce this – it’s a tantalising and fascinating hotchpotch of a story that plays with identity, belonging and morality. If you are in a mood for cinematic escapade, this may well have your name on it. Winterbottom is something of an Indophile, he conceded. It shows, gloriously…
ACV rating: *** (out of five).

Non-fiction
FRENCH auteur Olivier Assayas is a keen and acute observer of French social life and mores.
His last film, ‘Personal Shopper’ (2016) with Kristen Stewart touched on similar themes – but with more of a nod to Hitchcock than say, Ivory and Merchant.
This is lush in ways the above pairing would recognise – a mostly attractive middle-age cast, do battle in the digital age, fighting off a mid-life crisis (unarticulated) and trying to put their personal affairs (and there are) in order. Conforms almost comically to the Daily Mail stereotype of French life with everyone enjoying (?) extra-marital relations and some hardly opposed to them. Juliette Binoche is in fine form and the supporting ensemble are equally watchable in this entertaining, and wry social comedy. Very watchable if you’re not irritated by that French insouciance in personal affairs and a degree of underlying intellectualism, Anglo-American filmmakers studiously avoid.
Acv rating: *** (out of five)

Teen Spirit
LIKE father, like son. Max Minghella shows great ability and promise in his first outing, switching from acting (‘The Handmaid’s Tale‘) to directing, and his Dad, celebrated director Anthony, would be justifiably proud.
The title is slightly off-putting but refers to a teenagers’ reality TV music competition.
Hollywood star Elle Fanning is quietly brilliant as 17-year-old ‘Violet’ – diffident, uncertain but clearly talented.
A British Pole (and Polish speaking to her single-parent mum), she is befriended by ‘Vlad’ (Zlatko Buric), a much older, wiser but rather more dissolute former Croatian opera singer. The depiction of small island life and its limitations is beautifully done. A little less convincing is the change in tempo, uptown. Still, it’s a lovely watch and easy both on the ear and the eye and deserves to be seen widely – not least because Fanning is at the top of her game and so too is Buric and everyone else – and for a change this looks and feels like a Britain many of us would recognise.
Acv rating: *** ½

Widows
THIS is actually a remake of a Lynda La Plante TV series of the 1980s and transposed from the UK to the mean streets of Chicago.
The all-star cast are terrific, led by an almost imperious Viola Davis, as wronged widow, ‘Veronica’.
A heist movie that is considerably above its genre – and nothing less would be expected of British Academy Award winning director, Steve McQueen – this twists and turns like a bank robbers’ getaway vehicle.
There are great characters everywhere and it begs the question whether McQueen might have been better served making a TV series of this, but in the end he and big screen writer Gillian Flyn (‘Gone Girl’) pull it together – but at times and just like a getaway vehicle it looks like they might lose control.
Acv rating: *** ½

If Beale Street Could Talk
BARRY JENKIN’S follow-up to his wonderful and Academy Award best picture award for ‘Moonlight’ is another exacting slice of black life in America.
This time it is the 1970s New York and adapted from a James Baldwin novel of the same name, this holds you in and doesn’t drop a note – romantically.
‘Tish’ (KiKi Layne) is a teenager who finds love with ‘Fonny’ (Stephan James).
They are made for each other and Jenkins’ composition for the couple is both delicate and impressive.
How much he was aided by Baldwin in this is hard to tell, having not read the novel, but Baldwin’s narration comes alive and sizzles throughout. The couple’s love is tested by prison and an impending rape charge hanging over Fonny. Strong family support despite an unplanned pregnancy give the couple moral weight and poignancy – but who wins in a justice system so titled against young black men is a question we are still all asking…
ACV rating: ****

The Wind
EMMA TAMMI’S horror film is skilfully executed – from the opening and disturbing opening scene to the final climax, there is poise and precision.
Elizabeth Macklin (Caitlin Gerard) follows her husband into the American wild of the 1800s and sets up home. Loving and able, the two weather the hardships and troubles of an isolated life. When a new couple move in nearby and a priest pays a visit, the complexion of life changes and Elizabeth’s wild imagination goes into overdrive…what follows is a delight to anyone enjoys their horror, unrestrained.
ACV rating:***

Splinters
BELLE (Sofia Banzhaf) is your typical lesbian (as if…) – and has a disapproving mother to boot. When Belle’s father and her mother’s husband passes away, Belle returns to the wide expanses of the apple orchard farm home occupied now by her mother and brother in Nova Scotia, Canada.
Also there to offer support and a shoulder to cry on is Belle’s handsome friend ‘Rob’ .
Mother ‘Nancy’ (Shelley Thompson) is impressed and wonders if Rob is more than just a friend…
Well-known Canadian director Thom Fitzgerald pulls together an interesting family set-up to explore expectation and (mis)understanding.
At times, the film can appeared hackneyed, but adapted from a play of the same name, these are perhaps themes more easily handled on stage than by a camera easily distracted. Nevertheless, anyone negotiating the big city life versus rural, small-town community existence will find much of richness and inquiry.
ACV rating: **¾

*Films written about (and reviewed) on the site from #TIFF2018: Hotel Mumbai, The Sisters Brothers, and Husband Material/Manmarziyaan