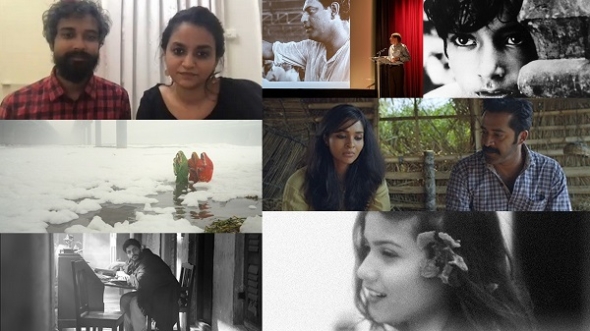 A FILM that continues to impress all who have seen it has been handed another award at the Toronto International Film Festival (TIFF).
Payal Kapadia’s ‘A Night of Knowing Nothing’ – has just been handed an Amplify Voices Award from TIFF (September 9-18). The awards were announced on Sunday morning (September 19) UK time.
The award which is sponsored by drinks firm Canada Goose celebrates diversity (films by Black, Indigenous and People of Colour – Bipoc) at the festival and handed three filmmakers Candian $10,000 each.
“Payal Kapadia’s unique documentary balances the personal and political with a surprising snapshot of her home country.
“Shocking at times, but also sweeping in its beauty, ‘A Night of Knowing Nothing’ is a first feature that already demonstrates her strong voice as a filmmaker,” commented the jury.
She posted her reaction on Twitter and with her was her editor, producer, cinematographer and husband, Ranabir Das.

The film first premiered in Cannes in July and www.asianculturevulture.com got to talk to Payal about her film which won the Golden Eye Award and is her first feature film.
Interview

TIFF also screened ‘Paka’ (‘River of Blood’)- look out for our interviews coming on this terrific family saga about revenge, retribution and love, set in the hills of Wayanard in north Kerala; ‘Dug Dug’ and ‘Shankar’s Fairies’. We were unable to catch these last two on TIFF’s accredited media digital platform.
The other Amplify Voices Award went to director Khadar Ayderus Ahmed for the ‘The Gravedigger’s wife’, while the Canadia feature award in this section went to ‘Ste. Ane’.
There was also a special mention of the feature ‘Scarborough’ which is a well-known immigrant neighbourhood, not far from Toronto. Directed by Shasha Nakhai and Rich Williamson, it is centred around three children of different ethnic heritages. The jury was made up of programmers, actors and influencers: Aisha Jamal, Ying Chang, and Calvin Thomas, Kaniehtiio Horn, Hugh Gibson.
Among the main TIFF competition winners were Kenneth Branagh’s ‘Belfast’, it won the People’s Choice Award, French feature, and Cannes Palme winner ‘Titane’ won the Audience People’s Choice Midnight Madness accolade; the People’s Choice Documentary Award went to ‘The Rescue’ by E Chai Vasarhelyi and Jimmy Chin; and ‘Yuni’ about an Indonesian young woman called Yuni and made by previous TIFF Platform entrant and now strand winner Kamila Andini; with critics’ Fipresci Jury Award presented to ‘Anatolian Leopard’ by Emre Kayis and the Netpac Award to ‘Costa Brava’, Lebanon’ by Mounia Akl, which stars Lebanon actor-director Nadine Labaki and comes to LFF next month (see below) as do ‘Belfast’ and ‘Titane’ too.

Ray biographer Andrew Robinson showed photos of Ray at work in his talk; Young Apu (Subir Banerjee) in ‘Pather Panchali’; and the older Apu (Arjun Chakrabarty) in ‘Avijatrik’ (‘The Wanderlust of Apu’)

A PART of West London became a hub of activity for those who love the work of legendary Indian filmmaker, Satyajit Ray (1921-1992).
The Bagri Foundation London Indian Film Festival (LIFF), autumn programme, celebrated Ray’s centenary birthday anniversary with a talk from world authority and Ray biographer, Andrew Robinson, followed by a screening of the Ray’s ‘Pather Panchali’, (1955) the film with which Ray announced himself to the world.
Robinson called Ray, “The Mozart of cinema at his finest” and with the Cine Lumiere (part of the French Cultural Institute in South Kensington) hosting, Robinson sketched Ray’s links to French cinema – most notably his connection to Jean Renoir who came to make ‘The River’ (1951) in India.
The 30-minute talk was followed by the screening of ‘Pather Panchali’ on Sunday (September 19).
On the previous day, LIFF screened a new film, ‘Avijatrik’ (‘The wanderlust of Apu’) which is something of a homage to both Ray and and Bengali novelist, Bibhutibhusan Bandyopadhyay from whose works Ray drew inspiration.
Shot in black and white and with an all-star contemporary Bengali cast, it’s an enjoyable feast of nostalgia for both Ray fans and anyone who enjoys period pieces – it picks up the tale with the central protagonist Apu (Arjun Chakrabarty) himself emerging as a successful writer and looking after his six-year-old son, Kajol (Ayushman Mukherjee).
The film, ‘Avijatrik’ screens in Manchester on Monday (September 27), having screened both in London and Birmingham. LIFF continues with a mix of online offerings, films, many talks and a few in person events in Birmingham and Manchester. (See links below). We interviewed director Subhrajit Mitra and he tells us that he is working on two films currently, ‘Mayamrigaya’ (‘Two Sisters’), a novel by Rabindranath Tagore and another novel, ‘Aronyk’ by Bandyaopadhyay.
In Birmingham this evening (September 22), there is double screening of ‘Mutiny: Asians storm British Music’ (directed by Vivek Bald) and ‘A Brimful of Asha’ (Pratibha Parmar), both about the British Asian Music scene in the 1990s.
A discussion of ‘Mutiny: Asians storm British Music’ between acv editors Sailesh Ram, Suman Bhuchar and influential music producer Terry Mardi will hit the site’s Youtube channel.
Look out on social media for news of its broadcast or subscribe and don’t miss by ticking the notifications icon on Youtube (here: https://www.youtube.com/c/asianculturevulturecom1/about)
In Manchester: the classic ‘Mughal-E-Azam’ screens – see here for this and other details
For more on Wednesday’s films in Birmingham https://birminghamindianfilmfestival.co.uk/mutiny-brimful-of-asia/
https://birminghamindianfilmfestival.co.uk/ https://manchesterindianfilmfestival.co.uk/

LONDON FILM FESTIVAL (LFF) opens on October 6-17 and one of the Indian films to screen is the climate crisis film, ‘Invisible Demons’.
Made by Rahul Jain, it premiered in Cannes in July in a special inaugural strand devoted to films about the environment.
Jain chronicles the deterioration of Delhi – a city he calls home and grew up in – though he has more recently been living in the West.
Jain spoke to acv in Cannes about his film – it screens at LFF on October 15 and 16 – see the below link for details.

We carried an early preview of LFF and will be looking more closely at the festival again before October 6. Stay tuned!
Preview: http://asianculturevulture.com/portfolios/london-film-festival-2021-early-preview-look-out-for-riz-ahmed-adeel-akhtar-and-asif-kapadia-and-two-indian-films-and-comedy-7-days/
Link: https://www.bfi.org.uk/london-film-festival/news/full-programme-65th-bfi-london-film-festival