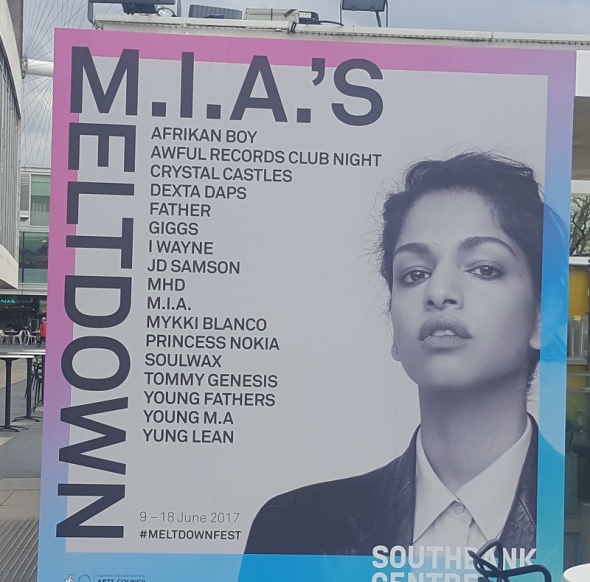 ALMOST everywhere she goes, she’s created controversy but she remains one of the country’s most enigmatic and powerful artists – and there’s chance to get to know her better and up close and personal.

Today sees the opening of the Meltdown Festival (June 9-18) at the Southbank Centre in London and it is curated by Mathangi ‘Maya’ Arulpragasam, better known to all as, M.I.A.

A series of concerts and music events mainly (26), there are also special events and talks (5) and visual displays (2), which all form part of Meltdown. The festival allows M.I.A. to indulge her musical tastes and inspirations, and also talk about some of them both in person and through her music.

On Sunday (June 11), she appears in ‘I am…M.I.A.’ – which will be one of the most eagerly anticipated of all events during Meltdown. It is sold out, but do check the box office for returns and standby.

She will be talking about her career and those controversies no doubt and it’s a rare chance to hear a global artist in front a live audience there to listen to her talk, not simply play music and sing.

Earlier on the same day, she will be chairing a debate entitled, ‘What’s coming next?’

It includes philosophers and social theorists Slavoj Zizek and Srecko Horvat and there is a scheduled video link up with one of the world’s most famous ‘wanted men’. Julian Assange may no longer be wanted by the Swedish authorities in relation to a sexual assault allegation, but he still remains on US watch lists for disclosing classified information.

All three will be looking to answer the question, while M.I.A will moderate.

The close of the festival sees M.I.A. return in a personal capacity – this time to play the Royal Festival Hall (RFH) itself, and joining her will be the Women of the Roundhouse Choir.

It will bring the curtain down on the whole festival and a special day of events that tie in with the beginning of Refugee Week and what the Southbank Centre (SC) is billing as the Meltown Mela.

There’s an afternoon of free music featuring musicians from refugee backgrounds and includes singers Shadia Mansour (known as the first lady of Arabic hip hop) whose lyrics often have a political edge and examine the state of the Middle East.

Another musical figure with political overtones appearing is Farhood, who fled Iran in 2011, raps in Farsi and has been perfecting his craft with UK grime artists.

Project Refuge/e is a touring installation that aims to show you what it is like to be from Syria amidst the crisis and stuck in a refugee camp – as a shelter from Beirut is brought to the Southbank Centre, all complete with a United Nations High Commission for Refugees New Arrival Kit. There will also be a chance to hear more about the daily experiences of the 1.5 million Syrian refugees living in Lebanon today. This installation can be seen from Tuesday (June 13).

One of the highlights of the final evening will be the Iftar Party with Seenaryo. This is an arts and education group which works with Syrians and Palestinians in Lebanon and there will be a live-link up with the Shatila refugee camp in Beirut as it breaks the fast with Iftar, the traditional meal marking the end of a day-long fast during Ramadan.

Rinse FM Block Party will be present on the final day – and with Meltdown Mela there will be South Asian DJs and others keeping the vibe cool and culturally connected.

Among the other highlights of Meltdown are dance music maestros Soulwax presenting a new album, ‘Dewee’ with a seven-piece band – tomorrow.

It all starts tonight with the Young Fathers playing at the RFH.

When it was first announced MIA would be curating the 24th Meltdown and following in the footsteps of such icons as David Bowie, David Bryne, and Morrisey, among others, she said: “I’m bringing together new outlaw musicians from everywhere, who have contributed to keeping things weird, exciting, opinionated, loud, emotional and brave or off the grid in the present climate.”

M.I.A. who grew up in London as a refugee, has released five albums, and has received numerous nominations for Grammy Awards, Mercury Prize and Academy Award in 2009 (for her track, ‘O Saya’ in ‘Slumdog Millionaire’). She was based in the US during the early part of this decade and has a son from a relationship during her time there.

Tomorrow will see a Carnival Party from 2pm on the Riverside Terrace, Soulwax at 9.30 at the RFH and Afrikan Boy in the Clore Ballroom downstairs from 10.30pm.

M.I.A. begins a global summer tour in in Switzerland next Friday (June 16) and plays again the Uk at Winchester at the Boomtown Festival on August 13.

Privacy & Cookies: This site uses cookies. By continuing to use this website, you agree to their use.
To find out more, including how to control cookies, see here: Cookie Policy
← ‘A Suitable Boy’: Modern choices presented in sumptuous costume period drama – but where does it lead us? (TV series wrap)
‘A Suitable Boy’ – actors Namit Das, Mikhail Sen and Danesh Razvi talk about roles, working with Mira Nair and Vikram Seth… →