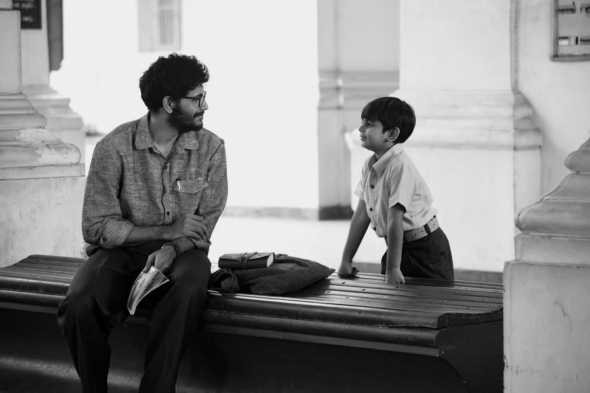 IF YOU’RE an admirer of the films of Satyajit Ray and his film ‘Pather Panchali’ (1955) and the Apu trilogy it started, the London Indian Film Festival (LIFF) opens an autumn programme with a film very much steeped in his character and filmmaking style.

It is also helps to mark the 100th birth year anniversary of India’s most famous film director who died in 1992. In London, it will be something of a weekend celebration for Ray admirers (see box below).

For the first time, and just a few months after its world premiere in India, ‘Avijatrik’ (‘The Wanderlust of Apu’) made by Bengali writer-director Subhrajit Mitra comes to London, Birmingham and Manchester as part of LIFF’s autumn programme this year.

‘Avijatrik’ will screen in London and Birmingham on Saturday (September 18) and in Manchester on September 27.

Made in black and white, and faithful to the period of 1940s it chronicles, it looks and sounds like a Ray film – Anoushka Shankar has written two tracks – in a tribute to her father Pandit Ravi Shankar, who composed the original score for Ray’s films.

Focused on the relationship between Apu and his young son, ‘Avijatrik’ picks up where Ray left off and explores Apu’s ambitions to make it as a writer; and also provide a safe and loving home for his young son Kajol – as well trying to live life as an adventure and satisfy his own wanderlust – hence the English title.

“It’s a piece of Indian history,” Mitra told www.asianculturevulture.com. “It’s a complete audio-visual experience. I really wanted to recreate that time in India, as it was in the 1940s, in the pre-Independence era.

“It’s about a person (Apu) who longs for adventure, and it’s journey about a father and his son and their relationship.”

It lovingly recreates the mood and tone of the times and is also a tribute to Bengali novelist Bibhutibhushan Bandyopadhyay, whose two novels, ‘Pather Panchali’ (1929) and ‘Aparajito’ (1932) inspired Ray in the first place.

“I am ardent admirer of both Ray’s and Bandyopadhyay’s work,” continued Mitra. “When I was growing up, I thought Apu’s journey was not complete on the big screen. I always wanted to complete that journey. There’s a part of Bandyopadhyay’s ‘Aparajito’ which is not in Ray’s ‘Apu Sansar’ (‘The World of Apu’ – and the last in Ray’s Apu trilogy).”

The ideas behind ‘Avijatrik’ have been gestating then for many years, but Mitra wanted to wait till he felt he was ready to take on the challenge of what he had set himself.

A self-trained director, who started when he was 19, he has made many documentaries for various channels, including international broadcasters, such as The History Channel, and ‘Avijatrik’ is his seventh narrative feature.

“This was a big undertaking and I wanted to grow as a director before undertaking a task of this magnitude,” revealed the director, who studied and worked initially as a computer software engineer.

Recreating the period took time and effort – scenes were shot in Varanasi (Benares) and other locations across North Bengal and Kolkata too.

“The production design was a huge challenge. I did a lot of research – fashion was very different, even the buttons on shirts were different – now they are all plastic. Everything was made on handlooms then and they used wooden buttons.

He painstakingly collated all his research material and visual references and shared that with his senior technical team.

“We shot in real locations and then the art department had to create certain structures and elements as they might have been in the 1940s and then afterwards, the special effects team would eliminate any modern buildings and other things,” he explained.

Mitra also assembled an ensemble star cast – with many of the biggest names in Bengali cinema appearing in his film.

“Every single actor is a big star in Bengal,” Mitra said. “They wanted to be in it and they agreed to do it because of the subject and they also wanted to pay tribute to the trilogy and Ray. I have worked with many of them before.”

Apu is played by popular Bengali star Arjun Chakrabarty; while his father, Sabyasachi Chakraborty, a well-known film and theatre actor in India, plays the iconic ‘Shankar’ – a much loved character in Bengali literature and who appears in Bandyopadhyay’s novel, ‘Chander Pahar’. Shankar is regarded as intelligent, curious and also has a penchant for adventure.

“I have taken some liberties in ‘Avijatrik’ and Shankar is like the European globetrotter in Bandyopadhyay’s ‘Aparajito’. I have made him Indian in my film,” Mitra told acv. “It’s the first time Sabyasachi has acted in a film with his son.”

Also appearing is Sreelekha Mitra (as Ranudi) who also stars in ‘Once Upon a time in Calcutta’ which has just premiered at the Venice International Film Festival. (See link below).

Part of the power of Ray’s work is the philosophy and culture that underpins it – and Mitra wants that to come through Apu in his film, and it is depicted in the character’s ambition to become an established and respected writer.

“The philosophy is there in the novel itself and it’s a big canvas. His philosophical thoughts are expressed through the narrative – Apu is himself a kind of philosopher in his writing.

“His writing is a contemporary interpretation of the Vedas and the Upanishads – about ideas of rebirth, and agency of the soul,” Mitra enthused.

There is also a certain unmistakable Bengaliness too to ‘Avijatrik’, he admitted.

“I had to talk to the senior members of my family and the wider family about some of the rituals of the time within Bengali culture and the villages – but some of it is totally lost.”

Ray’s trilogy, ‘Pather Panchali’ (1955), ‘Aparajito’ (1956) and ‘Apur Sansar’ (1959) are widely acclaimed and cited as classics of world cinema. He won numerous awards in India and was the recipient of India’s highest civilian honour, Bharat Rana, in 1992. Ray is also the only Indian director to have both been decorated by Cannes for ‘Pather Panchali’ and was presented with an honorary Oscar in 1991.

Other highlights from LIFF Autumn 2021

Pather Panchali (pictured far right below), the first of the Apu Trilogy, will be screened at the Cine Lumiere (London) on Sunday (September 19) and it will include a talk by Satyajit Ray biographer, Andrew Robinson. It starts at 4.15pm at Cine Lumiere – see details below.

🎥 Birmingham Indian Film Festival – British Asian shorts and discussion
‘Mughal-E-Azam’ (1960) – (pictured second left above) Indian classic screens in Birmingham and Bradford . ‘Too Desi Too Queer’ – a series of shorts with a focus on the LGBTQI and lived experience screens – see https://www.birminghamindianfilmfestival.co.uk/

🎥 ‘I’ll Meet You There’ (pictured top left above) – Iram Parveen Bilal’s film looks a at modern Pakistani American family navigating their path in Chicago. A girl is supported in her dream of becoming a dancer by her policeman father but the family face other pressures. It was nominated for an award at South by Southwest festival last year. Screens in Bradford. See https://www.scienceandmediamuseum.org.uk/cinema/mughal-e-azam-pg

🎥 Also available LIFF’s online portal are several of the In Conversation Series, which were held in person, at the BFI Southbank, during the first part of LIFF in June this year. These are talks with Hanif Kureishi (‘My Beautiful Laundrette’) and Asif Kapadia (pictured above third from left) – (‘The Warrior’)

🎥 ‘Runway’ film – Acclaimed Bangladeshi director Tareque Masud whose ‘The Clay Bird’ won a prize at Cannes, last film before his tragic death in a road accident in 2011. Teenager Ruhel gets lured into the world of a revolutionary politics.

For complete details of how to access online material, please see http://www.LoveLIFFatHome.com

Link
Sreelekha Mitra talking about Once Upon a time in Calcutta which premiered at the Venice International Film Festival (September 1-11) – https://youtu.be/u9ogw8LDNLo

Privacy & Cookies: This site uses cookies. By continuing to use this website, you agree to their use.
To find out more, including how to control cookies, see here: Cookie Policy
← ‘Hotel Mumbai’ – Anupam Kher talks about his No1 personal film and how making the film touched him… (video #tiff2018)
Abhishek Bachchan on Manmarziyaan (‘Husband Material) – ‘Robbie’ is the man we should all aspire to be’ and the joy of working with Kashyap, Kaushal and Pannu – and Red Carpet snippets (video) →