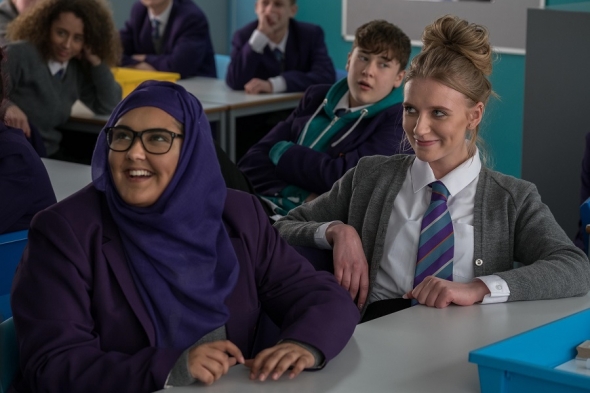 The man behind one of the most successful independent films of all time, as a writer, tells us about his latest TV venture based around a culturally mixed school in the north of England…

THERE is a lot of excitement around the forthcoming school series, ‘Ackley Bridge’, which will begin screening on Channel 4 (in the UK) from Wednesday 7 June.

The six-part series is occupying a prime-time drama slot at 8pm is aimed at family viewing.

The series has been created by Ayub Khan Din (of ‘East is East’ fame) and he is also an executive producer.

Khan Din explained that he was approached by the production company, The Forge to write a pilot for a new drama set in a school because Channel 4 were really excited about the success of their reality based ‘Educating Yorkshire’ and ‘Educating Essex’ and they wanted to build on that.

Khan at that time had just adapted ‘To Sir, With Love’ – ER Braithwaite’s autobiographical book about a black teacher in an inner city school in 1960s London – for the stage (November 2013, Theatre Royal Northampton) – and his children were going through selecting schools so he was really interested in education.

“When it as suggested that it be about a multicultural school, it excited me, about the possibilities the story could take. And I also found really exciting the idea of having so many Asian actors on screen,” siad Khan Din.

His co-executive producer, George Ormond, who was speaking at a Channel 4 preview screening explained that the company had done research across Lancashire and Yorkshire and discovered that there were schools that had merged, “so it felt like an opportunity to tell stories that hadn’t been told about Britain, about us, about who we are. It felt like we could go tell quite punchy stories that are big hearted, irreverent and funny and very, very contemporary and we got really excited about that”.

The series is set in a new school that has been created by merging two comprehensive schools – one with mainly Asian pupils and another with mainly white pupils – to create a spanking new academy, Ackley Bridge College.

The town itself is a Yorkshire mill town home to a largely divided white and Asian population, and the series follows the children, their families, their teachers, and life in a wider community of people living in a rundown Northern town.

The first episode begins on the first day of a new term at Ackley Bridge College, with a headmistress, Mandy Carter (Jo Joyner) trying to get the school ready for an official opening: we are introduced to two friends, ‘Naz’ Nazreen Paracha (Amy-Leigh Hickman) and Missy Booth (Poppy Lee Friar) – one Muslim and one English along with their families.

Missy Booth is de-facto carer for her grandmother and younger sister, while Naz, is the apple of her mother – Kaneez Paracha’s (Sunetra Sarker) dinner lady at the school – eyes.

Ackley Bridge is an engaging watch and there is a lot about the story line which will surprise viewers as it evolves.

It was shot in Halifax in a real school (St Catherine’s) which was closed down.

The first two episodes are directed by Penny Woolcock, and the others are Robert Quinn (episodes 3 & 4) and Jon East (5 and 6).

Khan Din said it took around two and half years to get made, which in television drama terms is a very short turnaround time.

“I wrote the pilot when I was doing ‘East Is East’ in the West End. They green lit it really quickly, which was fantastic. And then it went through this long, long, long process. But you can’t just say ‘we’re going to make a new multicultural drama that’s going to show diversity.

“It’s a very simple sentence, but when you get down to the nitty-gritty of what goes into making a drama like this, you get into a really long process. There are so many different issues involved”.

Among the challenges, he faced were to be “totally honest about the community that I’m from, and not avoiding the darker issues that are attached to that community. Making sure that all the characters from that community had a real voice, and weren’t there as props for white actors. If we’re going to deal with Asians, we have to deal with them warts and all, and have a completely honest voice.

“A lot of then kids are still facing the same problems that I faced and wrote about in ‘East is East’,” he continued, “such as a sense of identity and how far our parents have assimilated into society and the associated problems. That’s one of the reasons that ‘East Is East’ is still being performed today.”

Listing
Ackley Bridge, Channel 4, 8pm from tomorrow (Wednesday, June 7) and runs for the next six weeks.