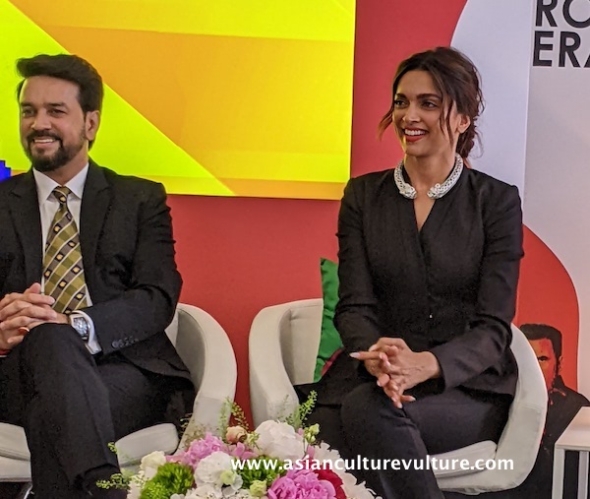 A STAR-STUDDED line-up of Indian actors helped to launch the India pavilion at the Cannes Film Festival earlier today – with an announcement too that the country will offer financial incentives for the first time to filmmakers to shoot in the country and use Indian talent.

But much of the excitement and the crowd that assembled had come to see the amazing array of Indian film talent that lined up to help launch the pavilion this afternoon. (Many countries have a pavilion here selling locations and production facilities and it is part of the market/business section of the festival, known more formally here as, Marche du Film).

Bollywood megastar Deepika Padukone, who is on the official Cannes competition jury, was joined by actors Tamannaah Bhatia, R Madhavan (who is here with his first directorial effort ‘Rocketry’ in the market section), Nawazuddin Siddiqui, director Shekhar Kapur and music composer, AR Rahman, who is now directing and is promoting his virtual reality, sensory experience film, ‘Le Musk’.

This talent – all pretty much household names in India and some globally – were at the very front and on the panel itself.

Sitting just in front of them in the front row was actors Pooja Hegde and Urvashi Rautela, both established actors with large followings. All expressed their pride at being at Cannes this year – especially as India has been declared the country of honour in the market section.

The stars and everyone spoke not only of their pride but their keenness in representing Indian cinema to the world and taking it further – few Indian films have made it into the two main competition sections (Competition and Un Certain Regard) in recent years.

At the heart of this brilliant fly on the wall story by director Shaunak Sen is a Muslim family who are amateur bird doctors. He charts their lives over about 18 months between 2019 and 2021 and it is a deeper reflection of difficult currents within the country – pollution, environmental degredation, social exclusion, poverty and inequality – as there is in many places around the world – as well as being tender, heartwarming and surprisingly upbeat as a film. (See here for more).

This all seems a long way from the glamour of the Croisette and beauty of the Mediterranean, but it is the only Indian film that will get the Cannes film laurel – despite the jamboree that surrounds these undoubted stars of cinema from India – who have just walked the red carpet this evening at the Tom Cruise ‘Top Gun Maverick’ premiere and may also possibly attend a party too, marking India as the country of honour in the market section later.

Padukone, who has a luminous presence here, praised both Rahman and Kapur for their contributions to world cinema and helping to put India on the cinematic map internationally.

She said: “India is on the cusp of greatness and this is just the beginning.”

She recounted how no one really took her seriously when she first started but here she was 15 years later and relishing her role as an ambassador for Indian cinema.

Kapur has been on the jury before and had some wise words for Padukone, while Rahman has attended Cannes several times and is a creative, who looks outside India with a keen ear for what works for both East and West.

Both these filmmakers significantly worked with British film talent in realising the ambitions of their producers.

AR Rahman’s Hollywood breakthrough, if it can phrased like that, came in ‘Slumdog Millionaire’ (2008) by Dany Boyle and Kapur made ‘Elizabeth’ (1998) for Polygram Filmed Entertainment.

Moving back to today (May 18), Anurag Thakur, India’s minister of information and broadcasting, said as much as 30 per cent of finance for a foreign co-production film, up to a modest limit, could be claimed back by foreign producers – making it more attractive for them to film in the country and employ Indian talent.

It is the first time a country has been selected as a country of honour in the market and highlighted in this way at Cannes – though it is not uncommon across international film festivals and India does it at its own government backed – the International Film Festival of India (IFFI). ACV covered both 49th and 50th editions.

The Cannes India pavilion launch began formally with a ribbon cutting and then the unveiling of the poster for IFFI, which takes place in Goa from November 20-28 this year.

Breaking: Tamannaah, Rautela and Indian TV star Helly Shah was among those who have just walked the red carpet for the premiere here of ‘Top Gun: Maverick’. They were all making their Cannes Red Carpet debuts.