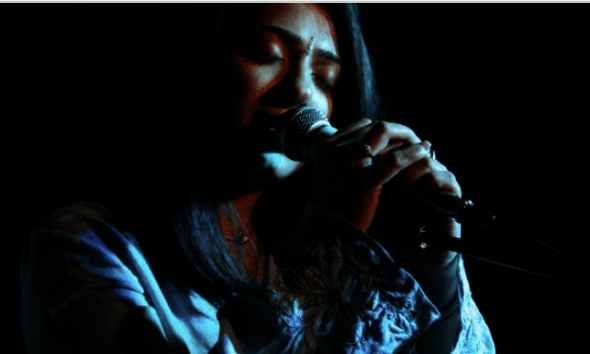 BEST-KNOWN for her vocals and a regular contributor to the Darbar Festival as a supporting musician, Unnati Dasgupta is stepping more into the spotlight as she releases her first solo album.

This week she plays at a well-known jazz venue in Chelsea on the famous King’s Road – at The Pheasantry – and it’s some indication of the style of music she’s explored in her debut solo album, ‘Indigo Soul’.

While coming from a traditional Indian classical music background and learning ragas, she’s not one to stick to orthodoxy or rigid genre boundaries.

Unlike many musicians of her ilk, she readily admits to not just listening to Western pop music, RnB, soul and of course of Bollywood, but enjoying it all and blending some of it into her classical training.

It’s her debut at the venue and she will be playing with her Jazz group and reprising some tracks from her forthcoming album. Rosebella Gregory will accompany on piano, while Alok Verma will play tabla and percussion.

Unnati, which is her favoured artist name, told www.asianculturevulture.com she’s excited about her appearance at The Pheasantry (on Friday, August 23) and revealing more of her album in the build-up to an official release later this year.

“I’m incredibly excited to be performing in a beautiful jazz venue in Chelsea, The Pheasantry. I’ll be performing with my jazz group songs from my forthcoming album ‘Indigo Soul’, Jazz Classics and Sufi repertoire,” she told acv. “I love the venue as it is intimate and acoustic. It’s the kind of venue where you hear artists up close and personal.

“I’m feeling blessed as not many Indian singers get programmed at Pizza Express venues, it is a prestigious venue and that’s always motivating for me to present my music to new audiences open to hearing Indian music as well as Jazz.”

She doesn’t want to be pigeonholed and her music is the result of a rich engagement with all types of genres and styles.

“I’ve always been about breaking boundaries with my music as I’m also interested to develop new audiences for my music and Indian music in general.

“I don’t believe that music has boundaries if audiences love the intricacy and the new sounds or melodies, they are always open to music from around the world. Music is energy for the soul after all.”

She will be making her debut as a vocalist this year at Darbar, Europe’s largest celebration of classical Indian music. The festival which is split into two now, begins with music from October 10-13 at the Barbican and then returns for a dance programme at Sadler’s Wells from November 22-26.

It’s already been quite the year for Unnati. She played the main stage of Womad, a festival that celebrates world music and defies easy categorisation. She joined the Bollywood Brass Band and Malmesbury Schools to sing there

Her sufi song – ‘Teri Yaad Aati’ (‘I think of you’) has been chosen by DJ Ravin to feature on CD 1 of the legendary ‘Buddha Bar’s Ultimate Collection‘. It is a 10 CD compilation which will release ahead of Unnati’s own ‘Indigo Soul’.

Of her many live performances across venues such as The Royal Albert Hall, Southbank Centre and Cadogan Hall, to name just a selection – her most memorable has been singing at Westminster Abbey for the Memorial service film director Sir Richard Attenborough (‘Gandhi’).

Unnati has a rather special musical pedigree, having been trained by her father, Indian classical vocalist Nitai Dasgupta, who himself played alongside the legendary Ravi Shankar and was one of a select group of musicians who first brought Indian classical music to Britain. Nitai trained under Ustad Amir Khan, a traditional Indian classical musician of great repute. Unnati released an album with her sister, Preeti in 2002 and the work led to a successful six-city tour of India.

*There will be more about Unnati and ‘Indigo Soul’ ahead of its release and her appearance at Darbar Festival on www.asianculturevulture.com – keep tuned!